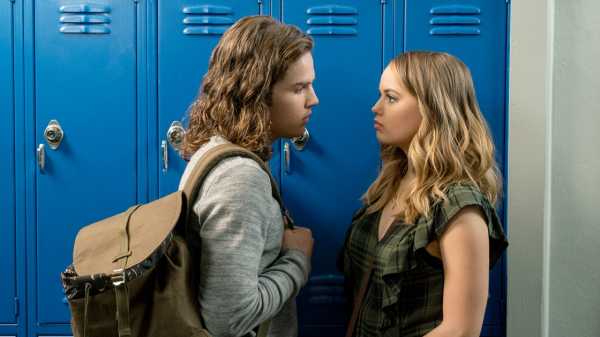 Last month, the trailer for the Netflix series “Insatiable” arrived, inciting a smattering of indignation. The protagonist, Patricia Bladell (Debby Ryan), begins the series as a high-school student shunned for her fullness of figure and taunted by her classmates as “Fatty Patty.” Depressed, she eats her feelings and binges on TV until, in an early serving of cartoon violence, she initiates a fist fight with a homeless guy who insulted her weight. He lands a punch, which leads to her jaw being wired shut, which prompts three months of a liquid diet, which leads to the reveal, as in “She’s All That” and other local touchstones, of the scorned dork as a total hottie. The prejudicial scolding of the trailer—the presumption of fat-shaming—failed to appreciate that “Insatiable” is excitingly preposterous, but it did provide an early proof of the show’s provocative power. In the critical drubbing that has accompanied the series’ actual release, “Insatiable” has been condemned as a thing even crasser than promised, and not without reason. Crassness is often the subject, and sometimes the method, of this brazen slab of camp. “Insatiable” offers a deliriously rude tour of appetites, including teen lust, desperate housewifery, stage-motherhood, and the unfulfillable hunger for glory.

Telling foolish sudsy stories with a dirty mouth, “Insatiable” pays tribute to the conventions of teen soaps and rom-coms. When the heroine, spying a cosmetics case, says, “Uh-oh, I feel a makeover coming on,” you can be sure that she is foreshadowing not just the application of eyeshadow but an homage to a staple montage. (Embedded within the series is a gloss on the career and star image of Drew Barrymore.) In the course of sassing its forebears by burlesquing their excesses and teasing out their subtexts, the show hoots at the clichés of pop fiction and real life even as it indulges them.

“Insatiable” has been received as a teen show, but is it, really? Though it may have a true and tender point to make about young friendship, its analysis of high-school cliques is largely limited to cueing up “Don’t You (Forget About Me)” on the soundtrack, reciting a familiar list of social types, and riding the coattails of “The Breakfast Club” to a soft chuckle. Certainly, the show’s attitude is adolescent, to judge by its cheaper gags (horse pucky, treadmill pratfalls), its regular boldness in risking moral gross-out comedy, and its zany characterizations. Alyssa Milano plays a status-seeking mom who drinks white wine and does a CrossFit-type workout at the same time; I thrilled at her refreshing directness when she woos an accomplice to her social climbing by saying, “What if I offered you a quid pro quo?” Christopher Gorham, of “Ugly Betty,” plays a golden-boy district attorney whose talents include flaunting his chiselled torso at the least opportunity; following arson investigators into a crime scene, he doffs his shirt, lest the scent of a charred motel room contaminate it.

At the center of “Insatiable” is the relationship between Bob Armstrong (Dallas Roberts) and Patty. (Debby Ryan deploys the direct sunlight of her Disney Channel-trained pluck to excellent ironic effect in the role.) Bob is a small-town lawyer in Georgia who, moonlighting as a pageant coach, trains teen-age girls in high-femme decorum and Vaseline-teethed feminality. A prologue explains how he came to be disgraced in both fields. During a pageant, one of Bob’s clients flunks a current-events question and fails to capture the tiara; her unhinged mother storms the stage to blame the daughter’s discombobulation on Bob, accusing him of inappropriately touching the girl. That there is a high degree of difficulty to the comic twistedness of such developments goes toward the nerve of the series’ creator, Lauren Gussis, whose confidence seems winning as long as the pace keeps up (and misplaced when episodes grow slack with meandering scenarios and repetitious dialogue).

Bob, working pro bono, because that is the only kind of work he can get, defends Patty against criminal charges stemming from her fight with the homeless man. He first meets her on the steps of a courthouse, where he sees not so much a person as an opportunity. “She was a diamond in the rough. A beauty queen just waiting to happen. Myyyy chance for redemption,” he effuses, his peachy voice quavering like he’s Ashley Wilkes. Bob returns often, and sometimes clownishly, to talk of redeeming himself, but the show is not simply ridiculing his narcissism or his vilifying as a patriarchal tool. Cynical though it is, “Insatiable” manages affection for all its craven goons and misguided saps.

The motion of the show’s sex-farce circle dance is such that Bob’s son is hooking up with the mother who fabricated the predation charge, until he gets back together with the daughter of the D.A., who elsewhere makes advances at Bob, who also is spurning the misplaced puppy love of Patty, whose own best friend is hopelessly crushing on her. There are tenuous alliances and demented obsessions—a panoramic rendering of folly. Patty emerges from her physical transformation as a bubbly sociopath: she believes that, when she ascends to fame on the pageant circuit, her former bullies will become “so jealous they can’t even breathe,” and her trembling hands clench as she says it. She is cruel and vain, an entertainingly horrible person who asphyxiates enemies in her imagination, one of the touches that lends this high-strung comedy an intriguing darkness, I think. Your nihilism may vary.