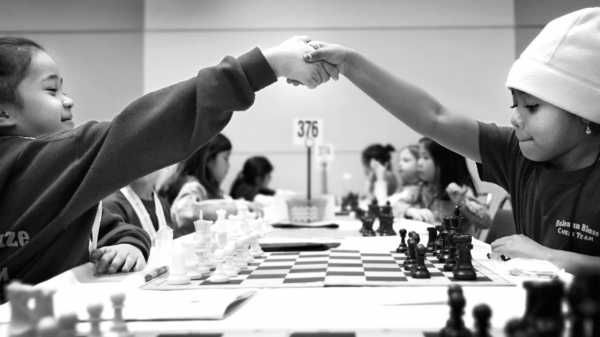 At an all-girl tournament, the players don’t worry about whispers or disrespect—they focus on the game they love to play. Video by Jenny Schweitzer.

As an avid amateur chess player who often has multiple online games going at once, I love the challenge on the board, puzzling out my next move during quiet moments of the day, and, of course, the thrill of a win. So I was delighted when my older daughter, then in kindergarten, showed an interest in the game. She happily joined the after-school chess program that is offered at most New York City schools, and, after a few months, she was off to her first rookie tournament. Instead of an exercise in competition and sportsmanship, her experience at the tournament was one of bullying and intimidation: the father of her opponent, a boy her age, chanted throughout the match, “You can beat this girl.” Her enthusiasm for the game died that day.

When my younger daughter, Sylvie, turned six and showed considerable interest in chess, I was prepped and ready for unruly parental behavior. I chose a small, all-girl event for her first tournament. After losing to a girl her same age, she proudly walked out with her arm wrapped around her opponent and declared that they were friends. The tournaments continued, and Sylvie, winning and losing, remained excited to compete and elated to go home with a trophy.

For a number of months, she was the only girl in her first-grade after-school chess class. When she played in tournaments, she rarely got to play against another girl. Her experience isn’t unusual: at the elementary-school level, there’s just one girl to every four boys playing tournament chess. By the time kids have reached their senior year in high school, that disparity has increased to ten boys to every girl.
I thought that playing in a male-dominated setting would be beneficial for Sylvie, perhaps priming her for similar experiences she would have as an adult. But shortly after Thanksgiving, on our walk home from school, she started to cry. The boys in the group had been mocking her, saying that she couldn’t be a good chess player because she was a girl. I was fuming.

I filmed the above video at the 2018 K.C.F. All-Girls National Championships, in Chicago, where I heard from many girls who’d had similar experiences. Even at their young ages, the female chess players in my video are keenly aware of being stereotyped. And their ability to articulate their frustration is startling. When I asked them what a chess player most needs, they didn’t talk about strategic thinking or rules of the game; they mentioned determination and the ability to face a challenge without being intimidated. At their all-girl tournament, they don’t worry about whispers or disrespect—they focus on the game they love to play. Organizations like the U.S. Chess Federation are working to bring more girls to the game, but, of course, sexist attitudes aren’t unique to the world of scholastic chess—the girls are dealing with a snapshot of gender stereotyping that still pervades society. As one young player put it, “Chess is like life, to me.”