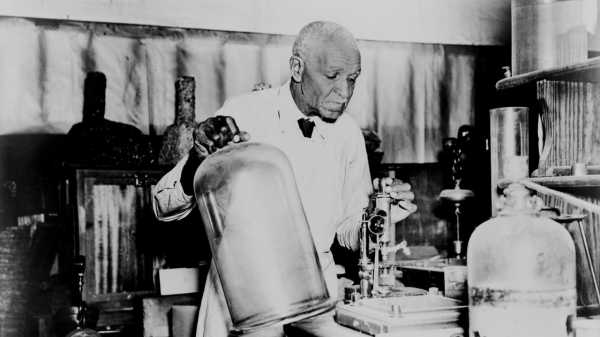 If you were shuttled through the American public-school system, you were
likely taught that George Washington Carver invented peanut butter. It
was conveyed to you that the man was a farmer who made his discovery
while fumbling in a turn-of-the-twentieth-century laboratory situated in
the vague geographical metaphor that is “the South.” If this is the
lesson you learned, I am almost certain that it was conveyed to you with
the particular gravity that is used to persuade children of the ultimate
usefulness of a minority race, and I am also certain that you learned it
during Black History Month.

In reality, Carver was an advocate for black farmers, a formidable
agricultural scientist, and an anthropologist of food. For all of his
influential experiments with alternative crops, such as the soybean, the
sweet potato, and the epochal peanut, he did not invent peanut butter;
the Aztecs likely did. He did, however, propose more than three hundred
uses for it, and for other cheap foods, including a prophetic technique
of pressing nuts into “milk.” In 1941, Carver was featured in Time magazine as the “Black Leonardo.” To schoolchildren, he’s known as the
Peanut Man.

There is a pantheon of American figures whose significance has been
similarly sculpted for the “Black History Month” sections of
social-studies readers, to show how their genial contributions
unobtrusively aided the course of American society. You are told that
without Garrett Morgan we would not have the stoplight—as if traffic
would otherwise have morphed into a daily gantlet of life-threatening
pandemonium. You are told, a little breathlessly, that Harriet Tubman
“freed the slaves,” as if abolition had been so plainly won.
Occasionally, there are complete miscommunications, an example being the
racial identity of Eli Whitney, the white inventor of the cotton gin.
Last year, Ruth Graham, at Slate, attempted to pursue the source of the false thinking about Whitney’s race; she found that it had essentially come from “classrooms when lessons on the entire sweep of
black history are crammed into the shortest month of the year.”

Childhood pedagogy is tricky. Last February, a few months after the National Museum of African American History and Culture opened, on the
National Mall, in Washington, D.C., the historian John William Templeton wrote, “Black History Month is usually a time where I can expect to cringe over
the real damage being done to all youth, but especially African-American
students, with a history that is not only bad for them, but also bad
history.” Caught between “stereotype” and “polemics,” he wrote, teachers
tend to “duck.” LaGarrett J. King, in a paper for the National Council
for the Social Studies, added that “K-12 Black history can be seen as successful to the extent that
students are now aware of famous Black leaders,” but “what is taught is
sometimes too lethargic, too celebratory, and lacks complexity.”

The Africana Studies department at Brown University was established less
than a decade before I enrolled there. At twenty-one, while scrounging
up an essay about womanism in the literature of Alice Walker, assigned
to me by the theologian Andre Willis, I backed away from my laptop and
let out a squeal, realizing that—although I had attended racially mixed
schools all my life—I, like most other American students, had never had
a black teacher. Professor Willis was the first. Had I understood, as an
undergraduate, how rare it was to gain intimate access to the depth of
historical expertise offered by the Africana Studies department, I would
have fought to take every class it had to offer.

It was Carter G. Woodson, a co-founder of the Association for the Study
of Negro Life and History, who, in 1926, proposed a “Negro History
Week,” for the second week of February, saying, “If a race has no
history, it has no worthwhile tradition, it becomes a negligible factor
in the thought of the world, and it stands in danger of being
exterminated.” Woodson’s provocation has evolved into something of a pop
holiday. (“Happy Black History Month!”) Now in its forty-second
rotation, and its second under Trump, Black History Month in America has
a more conspicuously folkloric tint. The Google Doodles (there was an
illustration of Carter G. Woodson yesterday), the themed media packages
that inundate my in-box, and the TV-movie marathons constitute a public-education program at once necessary and mawkish. We were all fascinated
by the casualness of Trump’s stunning gaffe last February: “Frederick
Douglass is an example of somebody who’s doing an amazing job and is
being recognized more and more.” But the absurdity of the example
obscures a more general truth about education in America. There is no
dissonance between the President’s exploitation of grieving black
families at his State of the Union address and his White House declaring
that this February would be devoted to “African-Americans in times of
war.”

The rituals are enlivening. America awkwardly attempts to own a version
of its unsettled past, and blackness becomes a theme. The invocation of
giants proliferates in the strangest places;
corporate endeavors, like the impending Marvel film “Black Panther,” are read as
radical. #BlackHistoryMonth—a hashtag the Twitter team has punctuated with an emoji of tri-skin-toned power fists—is a collection of the sincere and
the dubious, the solemn and the silly. (“ ‘It’s black history month
BITCH!!!!!!’ I yelled as I cut in line at Whole Foods.”) One truly
amazing meme shows a du-rag Photoshopped onto the head of Martin Luther King, Jr. I enjoy the flash, the grandeur of February. We all know that
there is a farce to the pageantry, that the magnification of this
temporary lens is skewed. But we’ve found dignity in tighter spaces.