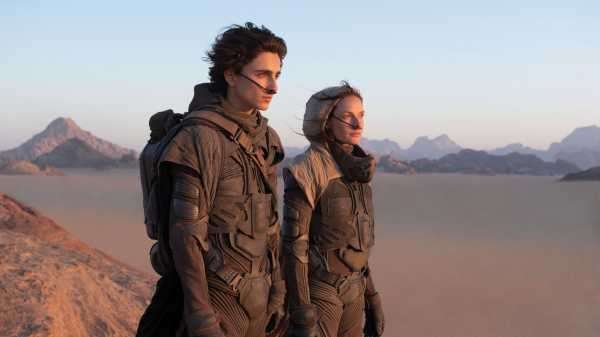 Pressed inside an old book of mine is a gray sheet of paper, folded in uneven quarters, titled “Dune Terminology.” On it, there are thirty-seven words and phrases, including a baffling array of place names (Giedi Prime, pronounced “Gee-dee”), machinery (ornithopter, a “small aircraft capable of sustained wing-beat flight in the manner of birds”), and rituals (kanly, a “formal feud or vendetta under the rules of the Great Convention”). Moviegoers with tickets to David Lynch’s “Dune,” which premièred December 14, 1984—I saw it on opening weekend at a mall, in suburban Buffalo—would have picked up the glossary from a stack as they entered the theatre, though the guide was unreadable in the dark, and it contained more than a few spoilers. To the novice, it must have looked like homework. It must have looked like no fun at all.

I didn’t need the cheat sheet—at fourteen, I was conversant with the “Dune”-iverse, having already read Frank Herbert’s best-selling science-fiction novel. By 1984, the book had sold over ten million copies and spawned four sequels. Focussing on the fifteen-year-old hero Paul Atreides, the story unfolds twenty thousand years in the future, on the desert planet of Arrakis, home to sandworms as big as spaceships, a group of guerrilla survivalists called the Fremen, and the coveted spice known as melange, which allows its users to “fold space”—a necessity for interstellar travel—and which colors the entirety of their eyes blue. “Dune” mesmerized me. I scribbled the Fremen rallying cry, “Ya hya chouhada,” in the margins of my notebooks and studied the vibrant cover painting, with its dozens of tiny people fleeing a rampant sandworm, its maw lit up like a jet engine. The movie couldn’t arrive fast enough.