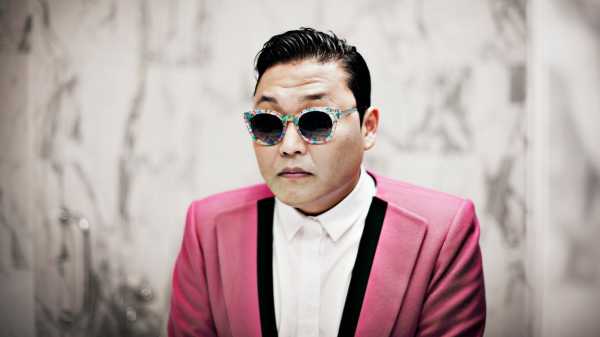 The capital of South Korea makes a good first impression, not least with its infrastructure. This May, Seoul’s ever-expanding subway system opened another addition, an extension of the Shinbundang Line that connects four existing stations. The northernmost, Sinsa, lies in an area popularly associated with South Korea’s world-renowned cosmetic-surgery industry. (In search of coffee there one morning, I passed up the three or four closest cafés, intimidated by their location inside the clinics themselves.) The southernmost, Gangnam, needs no introduction. On one platform wall, a large and somewhat amateurish mural pays homage to the pop star Park Jae-sang, better known as Psy, whose viral hit “Gangnam Style” introduced the eponymous section of Seoul to the world ten years ago.

Psy was not an obvious pop-cultural ambassador. At the time of the release of “Gangnam Style,” he was a thirty-four-year-old Berklee College of Music dropout unknown outside Korea and censured more than once in Korea for both his musical content and personal conduct. The singer-rapper-jokester seemed to exist in a reality apart from K-pop, with its impeccably turned-out young performers, organized into boy bands and girl groups precision-engineered for international appeal. Yet it was he—not 2NE1, not SHINee, not Wonder Girls, not Big Bang—who finally cracked the West. (The global phenomenon that is BTS wouldn’t officially début until the following year.) Even more surprisingly, Psy did it with what amounted to a Korean inside joke: his big hit lampoons the garish and culturally incongruous pretensions of Seoul’s nouveau riche, a class in evidence nowhere more so than Gangnam.

Psy once likened Gangnam to “the Beverly Hills of Korea,” which conveys the area’s associations with wealth and fame but downplays its size. In the most literal sense, Gangnam constitutes half of Seoul: the word means “south of the river”—that is, the Han River that runs through the city in the manner of the Seine or the Thames. Below the Han is a ward of the city, called Gangnam, which is nearly three times the size of Beverly Hills. Korean television dramas make near-perpetual use of its high-society signifiers: skyscrapers, luxury boutiques, night clubs, streets full of imported cars. But, as recently as the early nineteen-seventies, the place was nothing but farmland. Gangnam’s urbanization rushed down lines laid out by South Korea’s military government in the late nineteen-sixties, a process that enriched the owners of the former agricultural expanse. “Gangnam Style” shows a keen awareness of the chonsereoum (a rustic dowdiness, literally “village likeness”) beneath the quasi-cosmopolitan flash.

Soon after the song and video became an international phenomenon, the poet Yang Byung-ho published a newspaper piece characterizing Psy’s combined project as “a cheerful and unreserved provocation against the older generation’s authoritarianism and puritanism,” one meant to subvert familiar concepts, lyrics, and dance moves. “Such an attitude runs counter to the existing music put forth as ‘hallyu,’ ” he wrote, using the term that refers to the “Korean wave” of pop-culture exports that washed over Asia in the early years of the twenty-first century, bolstering Korea’s regional soft power. After praising “Gangnam Style” ’s almost supernaturally catchy rhythm, as well as its power to “succinctly summarize complex modernity through paradox and satire,” Yang suggested that his countrymen simply get all the enjoyment out of it they can: “Don’t ask questions and don’t quibble.”

However many Koreans followed that advice, they could hardly have made “Gangnam Style” the first YouTube video to reach a billion views by themselves. A study conducted by researchers at Eötvös Loránd University, in Hungary, determined that it spread across the world not directly from Korea but outward from the Philippines, where there already existed an avid fan base for things Korean. In Manila, one finds everything from Korean cosmetics on its shelves to Korean dramas on its televisions. The intensity of the product placement on these shows can at times reduce them to what Youjeong Oh, in her study “Pop City: Korean Popular Culture and the Selling of Place,” calls “a collage of commercial advertisements without a solid narrative.” In the early years of this century, hallyu hits showcased Korea’s new affluence in a more or less uncomplicated fashion. Yet this was also the heyday of the movement known as New Korean Cinema, and the discomfiting-to-harrowing work of its auteurs—Kim Ki-duk’s “The Isle,” Lee Chang-dong’s “Oasis,” Park Chan-wook’s “Oldboy”—suggested that all was not well in the land of the morning calm.

The “Gangnam Style” video makes similar intimations, albeit in a much more lighthearted manner. It opens with Psy reclining, drink in hand, on a chaise longue in the sand. The shot then pulls back to reveal the actual setting: not a beach but a neighborhood playground, one of several mundane backdrops on which the four-minute spectacle proceeds to play out. It takes some effort, ten years on, to recall how bizarre “Gangnam Style” seemed to many Westerners when first they saw it. (As I once heard a prominent Canadian writer recall, “I felt like I was high.”) The little boy with the uncannily Michael Jacksonian moves, the cut to the horse stables, the sudden explosion, the chorus of “Hey, sexy ladies,” the disco-balled bus—these and other seemingly inexplicable elements, along with the placeless catchiness of the music itself, led to mesmerized repeat viewings.

Those unable to grasp the video’s satirical project could nevertheless sense something deeper going on. “Gangnam Style” wasn’t a run-of-the-mill Asian pop-culture oddity, such as the decontextualized Japanese commercials and game-show clips presented for the amusement of Western audiences in decades past. It displays self-awareness and even irony (neither, refreshingly, present at deadening American levels), and, even if non-Koreans couldn’t tell what Psy was making fun of, they could tell that he possessed a sense of humor. His boastful lyrics and strenuous posturing are further undercut by the incongruity of his harshly utilitarian environments: a muddy, neglected-looking riverbank dominated by elevated freeways; a parking garage through which blows a debris-filled windstorm; a public toilet stall. In true Gangnam style, Psy’s character insists on his own magnetism in blind defiance of the void of glamour around him.

The satiric project of “Gangnam Style” has, in the years since, been taken up by many Korean artists. Bong Joon-ho managed to strike a highly compelling balance between social criticism and cinema in “Parasite,” from 2019. Bong stages a collision of three families, each one both representative of and imprisoned by its class. The Park family, headed by a successful tech-executive father, lives a Westernized life in an architecturally distinguished hillside house. The Kims, who make what little money they have assembling pizza boxes, occupy a dank apartment built halfway below ground. Driven by a mixture of pragmatism and resentment, the Kims scheme to usurp the jobs of all the Parks’ hired hands, including that of the longtime housekeeper, whose husband has spent years hiding from creditors in the house’s basement.

The obviousness of the spatial metaphor at the center of “Parasite” seems not to have hurt the film’s success, and may indeed have facilitated it. When the housekeeper’s knife-brandishing husband emerges from his bunker, he turns the lavish birthday party being thrown for the Parks’ young son into a bloodbath. In the ensuing melee, the father of the Kims (played by Song Kang-ho, a popular actor known for working-class-hero roles) impulsively stabs the father of the Parks. This catharsis is triggered by the latter’s visible disgust at the smell of the man who’d been secretly living in his basement. This is the smell, as suggested again and again in previous scenes, of the underclass—the stench of its futile labor, of its mountainous debt, of its predestined failure.

This same smell, if it existed, would surely emanate from most of the characters in “Squid Game,” the Korean Netflix series binge-watched around the world last fall. Described by its creator, Hwang Dong-hyuk, as “a story about losers,” it imagines a sequence of traditional children’s games with life-or-death stakes, played by participants desperate to escape their financial troubles by winning the enormous cash prize granted to the survivor. “Squid Game” ’s unrelenting violence and critical heavy-handedness make “Parasite” look subtle by comparison. It was the former quality that made the show a spectacle, and the latter that inspired countless articles about what the series reflected about Korean society: its unfairness, its inequality, its inhumanity, its brutality. Yet, despite the apparent novelty of its subject, the English-language coverage of “Squid Game” was of a piece with English-language coverage of the country in general.

Western reportage on Korea tends to returns to the same dreary wells: the declining birth rate, the high suicide rate, the economic domination by conglomerates, the unceasingly pressured students, the menacing northern neighbor, the addiction to plastic surgery. (Even the 1988 Seoul Olympics have since come in for a revisionist portrayal as, in the words of The Nation’s Dave Zirin, “a horror show of torture, rape, slavery, and death.”) Foreign media have also caught on to the expression “Hell Joseon,” which, according to Se-woong Koo, the editor of the English-language news site Korea Exposé, ridicules Korea as “an infernal feudal kingdom stuck in the nineteenth century.” Its adoption by young South Koreans reflects their belief that “being born in South Korea is tantamount to entering hell, where one is immediately enslaved by a highly regulated system”—maintained by corrupt politicians and out-of-touch élites—“that dictates an entire course of life.”

In its eight years, Korea Exposé has gone through several different models. An early slogan, “Showing Korea as It Really Is,” positioned the site as a corrective to the propagandistic positivity of hallyu—a mission of debatable necessity, given the grim impressions of Korea already served to readers in the English-speaking world. This goes some way to explaining the surprising Western enthusiasm, in the decade since “Gangnam Style,” for not just Korean popular culture but Korean popular culture that attacks its own society. As little as Western audiences may know about the place, if they’ve been primed to see it as a dystopia, they’ll respond favorably to even its most grotesquely heightened dystopian portrayals. This, too, is satirized in “Squid Game,” with its room of decadent foreign “V.I.P.s” who thrill to the spectacle of Korean-against-Korean mass slaughter.

The Western viewer may feel relieved that, however intractable her own homeland’s problems are, at least she doesn’t live in Korea. This perception is unlikely to survive one ride on the Seoul Metro, which may well convince her that Korea is the more developed country. Its rise from shambolic postwar poverty, the so-called Miracle on the Han River, was accomplished in large part by making things to be sold to richer parts of the world. Textiles, ships, cars, and semiconductors enriched Korea in the twentieth century; in the twenty-first, expressions of dissatisfaction with that enrichment have become viable exports in themselves. “Parasite,” “Squid Game,” and even “Gangnam Style” are works sensitive to the injustice, venality, superficiality, and violence of Korean society—the very qualities, in an irony perhaps too stark for satire, that have motivated so many Koreans to immigrate to the United States. ♦