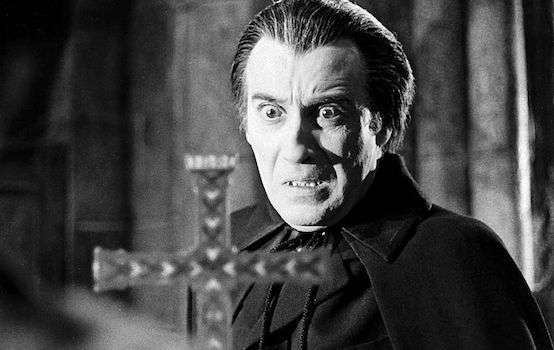 Beginning in the late 1950s, a dark miasma migrated from the verdant landscape of Berkshire, England, to drive-ins all across the United States. This creature was called Hammer Films, and according to Monster Show author David J. Skal, the studio “began cutting a distinctive red swath across audience retinae” with technicolor monstrosities like 1958’s Dracula (titled Horror of Dracula in the U.S.) and 1957’s The Curse of Frankenstein. By invoking the old gods of the cineplex, Hammer kept its popular films within the larger gothic tradition of the Victorian age, while also feeding red meat to the television generation, which was looking for something to replace the big bug and space alien flicks that Hollywood had been churning out since the end of the Korean War. In doing so, the studio bequeathed to the world major stars like Christopher Lee, Peter Cushing, and Oliver Reed.

Hammer movies, produced between 1957 and 1975, were noted for their lush cinematography, boisterous soundtracks, and use of classic evils like vampires, mummies, witches, and the like. More often than not, the films are set either in Transylvania or some unknown Central European village during the days of the Habsburg Empire. Victorian England is another favorite location, and as has been pointed out by more than one critic, many of the films are steeped in the age and attitudes of British imperialism.

Besides gore, cemeteries, fog, and fire, the one inescapable element of the best Hammer films is Christianity, specifically Roman Catholicism. The only Hammer director who has ever been described as an auteur, Terence Fisher, imbued his films with Christian morality and a conservative worldview that embraced the time-tested truth that good must always triumph over evil. In Fisher classics, like 1961’s The Curse of the Werewolf and 1966’s Dracula, Prince of Darkness, endangered civilians are saved from eternal damnation by clergymen armed with faith in the supernatural, as well as, occasionally, rifles. Yet Fisher’s churchmen are more than just sympathetic; they’re neither prone to unfounded superstition nor arrogant enough to believe that science and rationality can explain the world over.

One of Fisher’s best, and most often overlooked, films, 1960’s The Brides of Dracula, articulates one of the more unique ideas in the history of the fright flick: that vampires are akin to a Satanic cult. They seek blood precisely because they have turned away from Christianity. As the narrator says at the film’s beginning, even though Count Dracula, “the monarch of all vampires,” was dispatched by Van Helsing (played by Peter Cushing), his disciples are still haunting the woods of Transylvania and “spread[ing] the cult to corrupt the world.” One such disciple is Baron Meinster (played by David Peel), a blond and blue-eyed beast who became one of the undead after joining a debauched group of devil worshippers. In The Brides of Dracula, which does not feature Count Dracula at all, Baron Meinster transforms his mother into a vampire and tries to corrupt a French schoolteacher named Marianne (played by Yvonne Monlaur). He is thwarted by Dr. Van Helsing, whose chief weapon is a crucifix. In the film’s most memorable scene, Van Helsing destroys one of the vampires by turning a windmill into a giant cross. 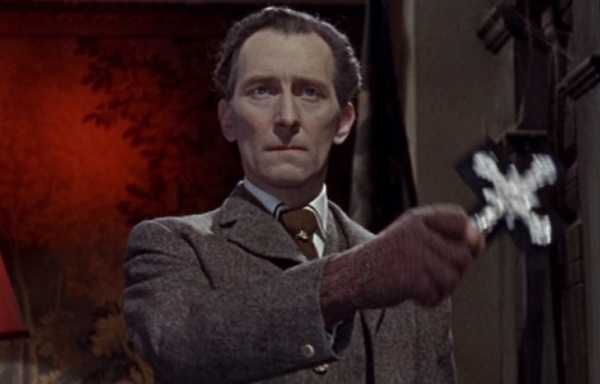 More occult vampirism is found in 1963’s The Kiss of the Vampires, which features one of the blasphemous vampire initiation ceremonies; 1970’s Taste the Blood of Dracula, which has Count Dracula resurrected during a black mass ceremony; and Dracula, A.D. 1972, which likewise replaces Lucifer with Count Dracula after yet another black mass ritual. The Count Dracula films of the 1970s, including 1973’s The Satantic Rites of Dracula, took the earlier suggestions of Fisher’s movies and grafted them onto the counterculture’s rejection of Christianity and interest in all things taboo. The Devil Rides Out (1968), often considered the finest Hammer film ever made, confronts the evil of devil worship head-on and even features a goat-headed Satan. Just as in the Dennis Wheatley original, the Prince of Darkness turns into vapor when struck with a crucifix.

Real occurrences influenced Hammer productions. Dracula, A.D. 1972 is often cited as a fictionalization of the Highgate Vampire controversy, which saw two members of the British Occult Society, David Farrant and “Bishop” Sean Manchester, chase after a “King Vampire” in London’s Highgate Cemetery. (The wicked remains of Karl Marx, which even today can be found in Highgate, apparently did not warrant the attention of these two monster hunters.)

While Hammer Studios is still around, the brand’s glory days ended way back in the mid-1970s. Horror aficionados love and respect the Hammer classics, but their support hasn’t been enough to get a production going in the current climate. Hammer themselves still make gothic tales set during the Victorian age (see 2012’s The Woman in Black, for instance), but they, like the rest of film world, now shy away from outright Christian moralism. Yet it is just this absolute moral clarity and certainty that makes the Hammer films of the 1950s and 1960s so refreshing. The crucifix is the ultimate prophylactic, the church is the source of all that is good, and brave heroes stand before evil armed with the best of both the spiritual and secular worlds.

All the vampires, werewolves, and demons never stood a chance.

Benjamin Welton is a freelance journalist who has been published in The Atlantic, the Weekly Standard, The Smart Set, and other publications.

Tours to St. Petersburg and Moscow

That to give, when is not time at choice gift?