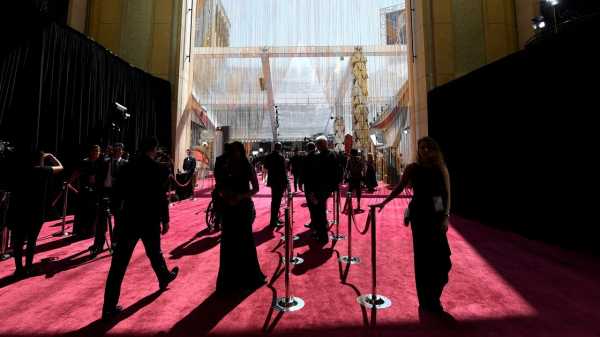 There are two things to bear in mind when approaching the Academy Awards. The first is that the Oscar for Best Director, in 1974, went not to Ingmar Bergman, for “Cries and Whispers,” but to George Roy Hill, for “The Sting.” So much for justice. If you want to see worthy winners, go to a racetrack.

The second thing is this “Wayne’s World” clip. The tears of Mike Myers are especially flowing and fine. The Oscars have always been a crying game, and the rules are perfectly clear: whether or not you spout during your onscreen performance, make sure that you have plenty of salt water on tap for any subsequent prize. Last night, the weeping began with Regina King and continued right through to Olivia Colman, two exemplary actresses who, however brisk and articulate they were in their respective films, saw that it was their duty to be rendered inarticulate by the amazingness of the honor being bestowed. Choking up is non-negotiable; anything less will be deemed insulting by the Academy and filed away as unforgivable. For bonus points, add a stream-of-consciousness yammer or an invocation to your chosen deity. Better still, recruit others into the fold. Colman gazed at her husband in the audience and announced, “He’s going to cry.” This was not a prediction. It was a royal command.

The host-free evening began with three wise hosts. To wit, Tina Fey, Maya Rudolph, and Amy Poehler. In a charming ruse, Rudolph had come dressed as her own bedroom—a cunning fallback, in case the temptation to snooze, during the latter stages of the ceremony, proved too much. Why couldn’t this affable trio stick around for the whole show? Mind you, the need to cram the program with a steady supply of random presenters did, of necessity, provide some excellent combos. As a mashup, for instance, the pairing of Helen Mirren and Jason Momoa just works, and I hope they will be very happy together.

The most inventive blends of styles, on the paddock outside the auditorium, were offered not by couples but by bold individuals who had decided to mash with themselves. To wear a jacket and shorts to the ceremony takes nerve, but to wear them in a camouflage fabric, as Pharrell Williams chose to do, is to enter a whole new realm of readiness. Whatever troubles might come his way, he would fight them on the beaches. Meanwhile, the baby-pink back bow sported by KiKi Layne, though humongous, was only the second-largest knot of the night. The winner was worn by Daniel Craig: a bow tie so huge, and so comical, that I kept expecting it to spin around and whack the actor on the chin. Either he had stopped off at the early nineteen-seventies on his way to the show or he was giving us a sneak preview of his next Bond picture, in which, with Q’s help, 007 turns into a human helicopter.

Such outfits were mere niceties, however, beside the magnificence of Billy Porter, who rolled up as a world unto himself. Above the waist, from the equator to the North Pole, he observed the dress code of a gentleman, with a regulation tux, tie, and shirt of snowy white. His southern hemisphere was another matter: a spreading black gown, which would have struck jealous green sparks in the eyes of Scarlett O’Hara. As Porter explained to Vogue, “my goal is to be a walking piece of political art every time I show up.” I tell myself that every day.

The entire evening, indeed, could be parsed as a piece of political art. The stage was an agora of diversity from first to last, and I would wager that more Spanish was uttered, in brotherly affection, than on any previous Oscars night. (I liked the mildly chastening moment at which Alfonso Cuarón, on one of his various visits to the winners’ microphone, confessed that he had grown up enraptured by foreign-language films: “Citizen Kane,” “Jaws,” and so on.) Also, nobody was in charge of proceedings, and, while the telecast never crumbled into the anarchic free-for-all that I had prayed for, there was a definite hint of loosening; the formalities were lightly bent and occasionally disobeyed. Colman, instructed to wrap up her address to the nation, stuck out her tongue and blew, and Spike Lee, fêted for the screenplay of “BlacKkKlansman,” leapt into the welcoming arms of Samuel L. Jackson and clung there, sneakered feet off the ground. It’s not often, outside a school playground, that you see someone jump for joy.

Yet mirth and rage are never far apart in Lee’s demeanor, as in his films, and the garland for “Green Book,” at the climax, launched him out of his seat in indignation. During the ensuing speeches, he reportedly turned his back, though the TV cameras had other matters to attend to. These, remember, are the Academy Awards; a little protest is permitted, but no more.

And the choice of winners? The usual tossed salad, I would say, comprising the dumb, the deserving, the downright bewildering, and the meh. Few would begrudge the industrious Rami Malek, who, like many victors over the decades, gave a performance that was all the stronger for sticking out from a feeble film, like a fountain above a muddy pond. And, if he delivered a thank-you speech that felt longer than “Bohemian Rhapsody” itself (the movie, not just the song), well, that was his privilege. As for the less successful contenders, I join my colleague Richard Brody in wishing that Melissa McCarthy and Richard E. Grant had won for “Can You Ever Forgive Me?” Instead, both went home with empty hands. So did Rachel Weisz, despite covering the upper slopes of her gown with a cropped T-shirt in wipe-clean scarlet latex, presumably to catch any tears of triumphant joy. Spare a kind thought, too, for Glenn Close—seven times unlucky, even though she took the tactical precaution, on this occasion, of donning an all-gold robe, thus cladding herself as the very treasure she sought. As Queen so starkly reminded us, in their opening set, “No time for losers, ’cause we are the champions.” Ouch.

Then there is Lady Gaga. Like pretty much everyone else, she was tongue-tied and halting—Hollywood shorthand for sincere—when required to talk, sans script, to an audience. Sit Gaga down at a piano, however, and the atmosphere instantly changes; when she surged through “Shallow” last night, there was a sense of ineffable relief that we were finally being taken in hand by a total pro. She breathed in deep and let fly, thirty million dollars’ worth of shiny yellow rock bumping softly against her collarbones. Bradley Cooper came around to the keyboard, and they snuggled up together to croon the closing phrase in perfect harmony; the cameras, entranced, homed in so close that we seemed to hover on the brink of a double endoscopy. Whether this was an act, a last-ditch plug for “A Star Is Born,” or a genuine melting of twin souls, lasting as long as twenty seconds, Heaven knows. What matters is that the Academy Awards, however briefly, took fire.

This is a drastic suggestion, I admit, but it’s unavoidable in the wake of last night, and, in particular, of something that failed to occur. On February 21st, Stanley Donen died, at the age of ninety-four. This means that the Academy of Motion Picture Arts and Sciences had three whole days to add his name, his likeness, and perhaps—why not go wild?—a tiny excerpt from one of his films to the in-memoriam section of the broadcast. A last-minute challenge, sure, but, with a greater concentration of cinematic sorcery in the greater Los Angeles area than anywhere else on the globe, how hard could it be? Ask Steven Spielberg to swing by on Saturday and do a quick cut-and-paste job, and you wouldn’t notice the joins. But no. Oscars night remained a Donen-less zone, and that alone, in my book, demonstrates that the A.M.P.A.S. is not fit for purpose. Forget the target audience, the ratings wobble, the market research: do your duty. Donen was one of the gods, and, if you don’t give thanks when you ought to, you shouldn’t be running the temple.

On the other hand, the noise of battle is fading. The stage from yesterday must be bare by now, and any flakes of gilt, chipped from fallen Oscars, will have been swept away. Billy Porter should be at least halfway through the complex business of strategically withdrawing from his frock. Private citizens everywhere, therefore, can stop their grousing, forget the folderol, truffle through their old DVDs (or, at any rate, go on YouTube), and remind themselves of what Donen, in his heyday, brought to birth. 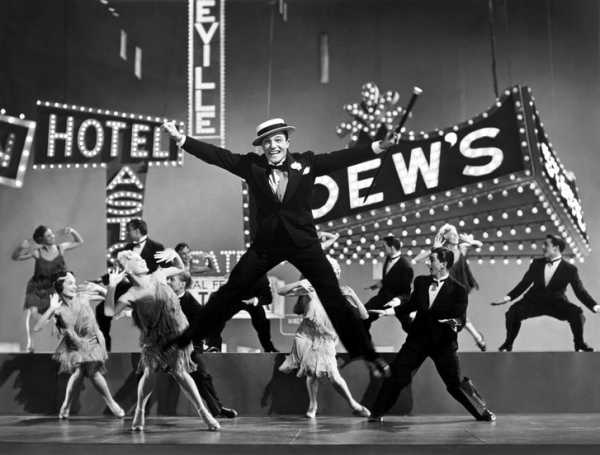 Gene Kelly in “Singin’ in the Rain,” from 1952, which Kelly co-directed with Stanley Donen.

First, “Alter Ego,” a single sequence from Charles Vidor’s “Cover Girl” (1944), in which Gene Kelly’s second self hops out of a store window and kicks off a spectral pas de deux. (Donen and Kelly directed it together; if you can work out who did what, in that tense and glorious partnership, good for you.) The alfresco liberty of “On the Town” (1949), whose opening minutes tugged the musical away from the studio set and onto the streets of New York, where life was less controllable and where the air, though dirtier, was somewhat easier to breathe. “Baby You Knock Me Out,” a combative highlight of “It’s Always Fair Weather” (1955), with Cyd Charisse all in green, as slender as a sapling, holding her own amid a clubful of boxers built like oaks. “Funny Face” (1957), dreamy and complete. Oh, and something called “Singin’ in the Rain.” If you don’t get that, you are not and never will be alive to the exultation of cinema. In truth, you may not be alive at all. As historians of the medium can confirm, “Singin’ in the Rain” was up for precisely two Oscars, at the Academy Awards of 1953. Jean Hagen, who played Lina Lamont, with a voice that could crack an ice rink, was nominated for Best Supporting Actress, and Lennie Hayton was nominated for Best Original Score. They both lost.