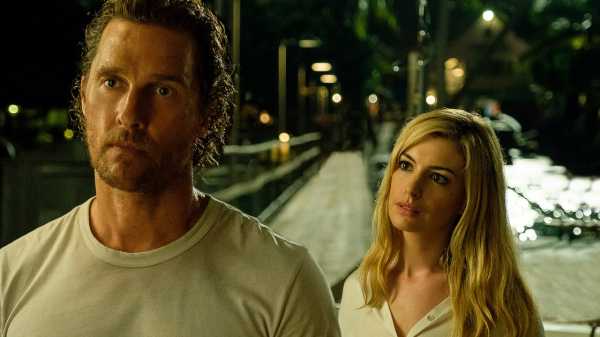 There’s almost nothing of consequence to discuss in “Serenity” that isn’t a spoiler, but there’s almost nothing in it that’s not spoiled in advance (except for the calculated earnestness of some plot points). For the most part, it’s a bland reprocessing of neo-noir tropes, vaguely borrowing its tone and theme from “Body Heat” and other films that are themselves reprocessings of earlier Hollywood motifs. But the clichés of “Serenity” are jolted by a big and strange twist that attempts to impose purpose and logic on those recyclings.The action is almost entirely set on (and in the waters of) Plymouth Island, an isolated tropical outpost, where Baker Dill (Matthew McConaughey), the hard-drinking captain of a small fishing yacht named Serenity, lives in gruff isolation in a converted shipping container at the tip of a lonesome strand. It turns out that he’s actually an Iraq War veteran named John Mason, living under a pseudonym. He’s cantankerous with the arrogant businessmen who are his clients; he’s in a pugnacious, no-strings-attached relationship with a woman named Constance (Diane Lane) and a pugnacious friendship with his mate, Duke (Djimon Hounsou); he’s in obsessive pursuit of a huge tuna that he’s spotted in the waters. Then he’s visited by his ex-wife, Karen (Anne Hathaway), who shows up dripping with money. She tells him that her new husband, Frank (Jason Clarke), abuses her—and also abuses her and John’s son, Patrick (Raphael Sayegh)—and she tells John of her plan to bring Frank to the island and to the boat so that John can kill him.

It’s conceivable that a filmmaker could bring new insights to such a story; for that matter, it’s easy to imagine a filmmaker relying on a creakily familiar theme precisely to open the story up to bold flights of directorial imagination. Steven Knight, the writer and director of “Serenity,” does no such thing. Knight the screenwriter exerts a puppeteering control over Knight the director, dictating and constraining his own cinematic maneuvers in the sole interest of building up to the big reveal. For much of the film, the clichés are so blatant, the general tone of tropical mystery and menace so brazenly cribbed, that the movie would make sense only as a high-level goof, a collection of clichés assembled as a meta-movie. And it turns out that this, more or less, is what Knight delivers—without actually having anything to say about these tropes and conventions.

At first, the twist that winks through the grimly realistic drama seems to be a metaphysical one: John, living on Plymouth Island, and Patrick, living in Miami, share something of a telepathic connection. (For example, father and son, in their respective locations, both see a splash of water on a table and run their fingers through it at the same time, while thinking of each other.) Midway through the film, however (here comes the big spoiler), the trick is revealed: everything taking place on and around Plymouth Island is itself a fiction, rooted in (but not exactly replicating) a video game. Patrick, who’s described throughout the film as a computer genius, lives in hiding from his evil stepfather and, alone in his room, recodes a video game about fishing and transforms it into a vision of his father, who was killed in the Iraq War in 2006, and into a surrogate representation of Patrick’s own plan to kill Frank.

The significance of “Serenity” is inseparable from the abjection of its failure; the temptation to mock the movie’s ridiculous film-noir grab bag and its video-game intrusions is tempered and inhibited by the gravity of the plot’s thematic engines of abuse, trauma, and war. It’s as if Knight were deflecting the mockery that the movie deserves with the solemnity of its subject matter. Even though Knight tips his hand with the movie’s first image—a close-up of Patrick’s eyes, as the camera travels into the pupil of his left eye, showing the greenish ocean and seemingly entering the boy’s head in order to explore its seascape, the characters in the film are far more than video-game figments; they have a fully actorly identity, and the protagonist, John, a.k.a. Baker, is endowed with a spectrum of activity and introspection that goes beyond the game.

Knight creates an imagination-sludge in which the various ingredients are all cooked together—his own cinematic depiction of the events and characters is inextricable from the events of the game that Patrick modifies, which are in turn inseparable from the modifications that Patrick imposes on them by means of his coding skills, which are further inseparable from what Patrick imagines of his father and the other characters while he modifies and plays the game. The movie is full of such details to unpack, but Knight just waves his hands vaguely at them. The cast of fine actors (among them, some of my favorites working today) are directed, in accordance with the movie’s generalities, to deliver flashy, transparently superficial parodies of familiar acting styles. Had Knight approached his subject audaciously and insightfully he’d have separated out the component strands of observation and imagination, would have sought out the psychological specificity and meticulous observation that, instead, he sacrifices to his conceit.

Fortunately, there’s already a film that exists, from 2009, that does exactly this—that dramatizes and details a teen-ager’s imaginative fantasies about his late father, who was killed doing heroic public service: Jared Hess’s “Gentlemen Broncos,” in which Michael Angarano plays Benjamin, a teen-ager who writes futuristic science-fiction-superhero novel, which is envisioned as three different films-within-a-film: Benjamin’s own vision of it, the vision of it evoked by an adult novelist (Jemaine Clement) who plagiarizes it, and the film of it that’s made by another teen-ager (Héctor Jiménez). Hess’s film offers an ingenious view of the uses and abuses of fantasy; on the other hand, there’s no violent stepfather who injures, terrorizes, and traumatizes Benjamin or his mother. It would be grotesque for Knight’s film to be an antic comedy akin to Hess’s movie, but the agony of “Serenity” is all the more reason for its traumatic elements to be more than plot points, for its hints and suggestions to be brought to life in dramatic detail.

“Serenity” is, instead, full of ludicrous trivializations that bypass the story’s troubling implications. It’s easy to imagine that Patrick grew up with stories about John’s heroism in war, the kinds of story that would link his father’s military service with Patrick’s own heroic vision of killing Frank. But there’s no such hint in the movie, which merely abuses the theme of a soldier killed in war. John could have been killed in a car accident, a homicide, a suicide, a school shooting—as constructed, John’s relevance to the plot is merely his absence, making way for the widowed Karen’s marriage to Frank. “Serenity” throws together, in an unconsidered way, some other substantial themes, including the American way of violence, the transmission of male violence, the inability of American society to protect women and children from domestic abusers, the societal and personal exactions of an unjustified war, and the earnest role of popular digital entertainment in creating a self-image. They’re thrown together raw and then overcooked beyond recognition; what comes off above all is Knight’s own vain sense of cleverness at daring to throw them together in the first place. And when, at the end, the lid is lifted for another big reveal, it provokes a weary shrug.