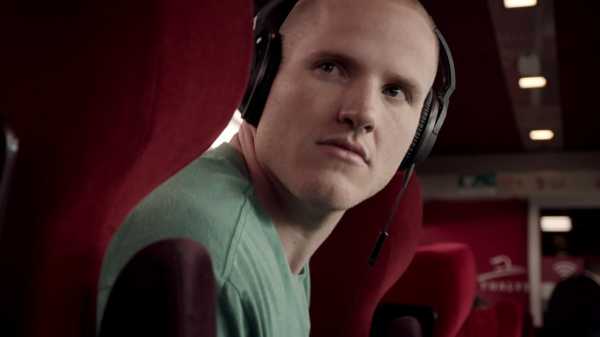 The mark of a classical artist is to meet expectations while defying
them, and that’s what Clint Eastwood—eighty-seven years old, and the
current American filmmaker whose firsthand links to classical movie
traditions are strongest—does in “The 15:17 to Paris,” which opened
Friday. It was clear in advance to anyone who has followed Eastwood’s
recent career that the movie, based on the true story of the three young
American men who thwarted a terrorist attack aboard a train in France,
in 2015, would only briefly depict the crucial event itself—that it
would mainly be a movie about the young men’s lives prior to that point,
the confluence of character traits and actions that led to the climactic
act of heroism.

“The 15:17 to Paris” is something of an ingenious cinematic ruse. Its
peculiarity, even its uniqueness, is that it’s essentially undramatic.
It’s not a bio-pic, not a real-life thriller, not really even much of a
story; it’s a thesis. The succession of events doesn’t follow
psychological or narrative logic; it follows Eastwood’s own logic, his
own conjectures as to which traits were necessary for the formation of
the characters of the three people who responded to the attack as they
did. The action of the film depicts solely events that, for Eastwood,
exemplify these traits. In the guise of its biographical arc, it’s a
didactic and philosophical film, a modernist bildungsroman that traces
the building of character, as if mapping the landscape of lives and
times from Olympian heights. His style, never ornate, is here shockingly
simple—its plainness goes beyond mere clarity to a sense of secular
revelation.

It’s also a film of gonzo casting. Eastwood recruited the three young
men—Spencer Stone, Anthony Sadler, and Alek Skarlatos—to play
themselves; none had ever performed in a movie before. The story
(launched as a flashback) spans a decade, with child actors filling in
the backstory, which begins in Sacramento, in 2005. There, two unhappy
white boys, the big and angry Spencer (William Jennings) and the
slighter, calmer Alek (Bryce Gheisar) are unpopular and bullied, and
both are bad students who get into trouble. Their mothers, Joyce Eskel
(Judy Greer) and Heidi Skarlatos (Jenna Fischer), are summoned to the
principal, who diagnoses the boys with A.D.H.D. and recommends that the
boys be medicated. They react angrily to the idea of their sons being
“drugged,” and—when he warns them that the sons of single mothers “tend”
to have problems—Joyce delivers one of the movie’s money lines: “My God
is bigger than your statistics.” Spencer and Alek are transferred to a
Christian school, but they remain distracted and confrontational,
defying the school authorities. On a trip to the principal’s office,
they meet Anthony (Paul-Mikél Williams), who’s black and endures the
administration’s prejudiced hostility. The principal warns the two white
boys away from associating with Anthony. Instead, the three boys become
fast friends, and what they do together is largely to play war.

Eastwood portrays the three boys, later the three men, as embodying a
wondrous mystery, a strange exception. He plants the roots of their
heroism in the utterly unheroic—in the irrepressible energies of three
bad boys who aren’t bad at all. They’re involuntary loners pushed into
isolation and opposition by their own incapacities and obstinacies—by
their social awkwardness, impulsive insolence, and inability to follow
rules. In their shared solitude, they possess a kind of natural aptitude
akin to musical or pictorial talent, or marksmanship, or a pilot’s
spontaneous agility—but their talent is for war. Spencer is into guns,
and brings Anthony to his bedroom to show off his collection of
weaponry. After a lesson on Franklin Delano Roosevelt and the New Deal,
the boys pester their teacher for copies of field plans from the Second
World War. When, as middle-schoolers, Spencer is separated from Alek
(who’s moving to Oregon, to live with his father), their parting gesture
is to salute each other. The teen-age Spencer decorates his bedroom with
posters for “Full Metal Jacket” and Eastwood’s own “Letters from Iwo
Jima”—two movies about the destructive folly of war wrongly waged—and,
when Spencer enlists in the Army, his mother tells him, “Every time
there was war on TV, you wanted to jump into the screen.”

Despite their Christian schooling and their martial passion, the boys,
and then the young men, are motivated neither by religion nor by
patriotism but by war itself, by a sort of moralized, protective
violence that they take as its own virtue and which they couch in terms
of helping others, saving lives, and a sense of honor. Eastwood is a
cinematic atheist who, in “The 15:17 to Paris,” sees the doctrine of a
Christian school as an instrument of too-rigid control, a faith-based
counterpart to the constraints imposed by social science on
public-school students. In their way, the boys are—from childhood
onward—walking touchstones for rules. The ones that they follow have a
moral basis, the ones that they ignore are the mere vanity of authority.
And their defiance, their casual disdain for trivial rules, is the key
to their historic action aboard the train.

As the protagonists reach maturity, the casting shifts and the three men
play themselves. The now grown Spencer, paunchy and indecisive, is
working at Jamba Juice. When a marine comes in for a smoothie, Spencer,
breathless with admiration, is inspired to get into shape and enlist in
the special forces. (Anthony is skeptical of his determination.) Spencer
washes out of unit after unit and ends up in basic training. Alek, who
joins the National Guard, is doing security work in Afghanistan, facing
danger but no actual combat. He and Spencer are planning a European
vacation during their leave; Spencer persuades Anthony to join them. The three meet up in Berlin, where Alek has gone to meet a
family friend and to visit a bar that his grandfather visited as an
American soldier during the Second World War.

The crux of the action occurs in Europe, when Eastwood’s casting coup
kicks into high gear. During their European trip, the three men come off
as the kind of tourists whom self-appointed travellers might be
embarrassed to travel with. They jaunt through Europe for good times,
taking the “perversion excursion” that the receptionist at their hostel
recommends, riding tourist boats, eating well, taking selfies
incessantly. Eastwood revels in the surfaces, showing that, even in the
course of this light-hearted journey, the substance of character reveals
itself, as in the contemplation, in Rome, of a site of gory death as
entertainment, and in a visit to Hitler’s bunker, in Berlin. Along the
way, several acquaintances discourage them from visiting Paris, and, in
Venice, Anthony suggests that they change their agenda and slow their
travels down. Spencer, who has quietly insisted on the Paris jaunt, gets
philosophical on him: “Do you ever feel as if life is catapulting you
toward some higher purpose?” It’s a philosophy of action, with its
implicit spirituality translating into banal practical action—keeping a
brisk pace of tourist rounds. A few days later, during a side trip to
Amsterdam, as the three men sit in a restaurant recovering from a
hangover, Anthony jokes about Spencer’s philosophizing. They laugh it
off, and make their fateful train trip to Paris.

Spencer and his friends don’t display any Christian devotion (until,
after the attack, seriously wounded and removed by first responders from
the train, Spencer offers a prayer in voice-over). What’s more, they
don’t display much in the way of book-learning or high culture, not
because they don’t have any (during the action, Anthony’s a college
student) but because, in Eastwood’s view, being studious or scholarly
isn’t among the traits that are necessary for the emergence of these
young men’s valor. Similarly, Anthony’s family life stays in the
background; he shares the other boys’ fascination with the Second World
War but does not discuss or consider the Army’s or the country’s
segregation at the time. And none of the three young men has any
romantic life, not because we are meant to assume that they have never
had girlfriends or are twenty-something virgins but because Eastwood
doesn’t treat a romantic relationship as essential to their martial
aptitude. Eastwood strips the three bare of their many character traits
in order to view the skeletal DNA of their heroism—and then, in casting
the men as themselves, he caps off his thesis with a Q.E.D.

The three men are able, alluring actors in their roles as themselves.
Stone comes off as the big man of the group, the natural leader of the
three, with a far-reaching gaze and a contemplative silence beneath his
easygoing charm that’s reminiscent of a young John Wayne. Sadler (whose
story is the least delineated) is sharp-witted, agile, and funny.
Skarlatos is earnest and watchful, with a tense and compact energy. If
they have any fear or inhibition on camera, it doesn’t show. How good
they’d be at incarnating other characters remains to be seen; I hope
that someone gives them a try, separately, in roles where they’d have to
get outside themselves a little.

The subject of “The 15:17 to Paris” is a secular miracle, an astounding
one-off à trois, and Eastwood’s film conveys it with a brightly ecstatic
sense of astonishment—but there’s a peculiar paradox at work in the
film, which pushes Eastwood’s lofty idealism in the direction of
political advocacy. Just as the movie is built as a long flashback,
Eastwood works out his story in reverse, looking at the American society
in which the three heroes were raised and seeing particular tendencies
that allowed their characters to flourish, even as they floundered,
before they had any accomplishments to show for themselves. It’s here
that Eastwood crafts a distinctively American tale: a story of second
and third chances, of alternate schools and the right to own guns, of
casual employment and easy credit, of loose families with tight
bonds. If you want a society to produce these types of men, the film
suggests, you’d do well to start with this set of conditions. Whether
this is true or not is a matter of reasoned argument and evidence, not
of faith—yet Eastwood lets the descriptive and prescriptive elements of
his story overlap and blend together. Nonetheless, his vision isn’t
narrowly optimistic. It’s easy to see, at every step of the action, how
much could have instead gone wrong for the angry, isolated, pugnacious,
violence-fascinated boys, how much serious trouble they could have
caused and got into—and that’s part of Eastwood’s world as well, the
proximity of great achievement and great disaster, of heroism and
tragedy, in individual characters. In “The 15:17 to Paris,” he doesn’t
depict those tragic alternatives, but they are as close to the surface
as the virtues that he celebrates.