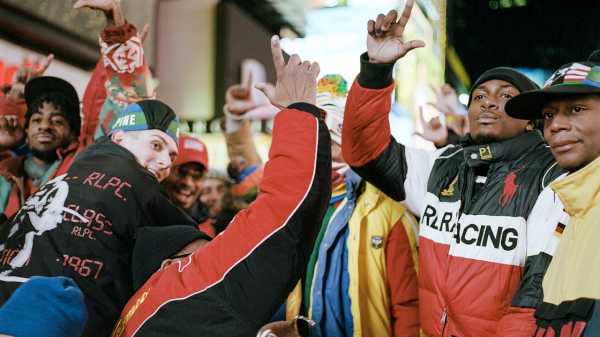 In April of 1992, twin ads ran in Esquire and GQ featuring a
windbreaker with a runner’s bib, the word “Stadium” across its
midsection, and red letters spelling POLO across its chest. The tagline
read, “Polo Ralph Lauren is proud to support the 1992 U.S. Olympic
team.” No matter that J. C. Penney was the actual Team U.S.A.
outfitter—Polo’s “support” was aspirational, a way of laying claim to a
heritage and an aesthetic. The other ads that Polo ran that year also
evoked a Waspy fantasy of sporting America: white men leaning off the
decks of yachts, or wearing “U.S.A.” fleeces while playing on ski
slopes.

The ads telegraphed the audience that Polo was targeting. But the
Stadium collection, of which the windbreaker was a part, found a
different audience: a small group of black and Latino Polo enthusiasts
who called themselves the Lo Lifes. In the nineteen-eighties, the Crown
Heights and Brownsville-based crew collected, flaunted, and, most
infamously, stole large amounts of Polo clothing—occasionally storming
department stores in so-called million-man rushes. Whereas Lauren—who
was born Ralph Lifshitz, in the Bronx—had social-climbing ambitions, the
Lo Lifes relished the ironic distance. “You could see me in Brownsville
rockin’, then go to Fifth Avenue and see a white person wearing the same
jacket,” Thirstin Howl the 3rd, a founder of Lo Life, writes in the book
“Bury Me with the Lo On,” a
photographic
history of the movement. “Difference is that they bought it—we weren’t buying
shit, we were taking it.”

Over the years, the Lo Lifes became less of a fearsome street gang and
more the stewards of a high-low fashion tradition. That tradition was
enshrined in a 1994 video for the Wu Tang Clan’s “Can It Be All So
Simple,” when Raekwon wore a Ralph Lauren windbreaker with red, yellow,
and blue color blocking and the words “SNOW BEACH” across the stomach.
(“I was definitely inspired by Lo Lifes because they were a bunch of
wild assassin young niggas,” he tells Howl.) The windbreaker became a
legendary item; in 2012, Chris Brown wore one in tribute during a
performance on the “Today” show.

Last year, a man named Ezra Wine announced that he would be selling a
hundred Lo Life pieces that he had gathered over the years for a million
dollars. “This is one person’s chance to own the collection that created
a culture,” he wrote. Shortly afterward, Ralph Lauren announced that it
would be rereleasing several of the Stadium collection pieces for the
twenty-fifth anniversary of its début; in January, it reissued Raekwon’s
“Snow Beach” jacket. The offerings suggest an abrupt and long-awaited
embrace for Lo Lifes and so-called Lo Heads in general. Their devotion
has always been unrequited—the Ralph Lauren vision of upper-middle-class
America has never included them.

Designers are always pressed to move forward; the retro-ing of clothes
represents an opportunity for them to slow down and recognize their
pasts. Last year, Helmut Lang brought back a suite of vintage designs as
part of its house reset; Nike has created a cottage industry out of
retro sneakers, and has been selling its customers’ enthusiasms back to
them since 1984, when it reissued its Air Force 1 model in Baltimore,
after fans in the city clamored for the sneaker’s return. The irony is
that the audience for a retro is often larger than the one that gave the
original style its cachet. Nike isn’t a retro titan because it keeps
selling Jordan XIs to the people who were sneaker-hungry teen-agers in
1995. Rather, through endless tweaks and remixes, the company has
cultivated the shoe’s mystique for decades. (Many of its customers
weren’t even born when His Airness débuted them.)

Other labels, though, have more fraught relationships with their pasts.
Lauren’s preppy rival Tommy Hilfiger, which embraced hip-hop in the
nineties, has spent the last twenty years dipping in and out of black
culture in ways that have sometimes alienated customers. For years,
Hilfiger was plagued by a false rumor that he had disavowed his
minority customers during an appearance on “The Oprah Winfrey Show”; in
2014, he told Bloomberg Businessweek that hip-hop “fueled a lot of
growth, but it took us away from our roots.” All the same, he recently
revived his urban-focussed Tommy Jeans line for a capsule collection.
When he presented his main line in London last September, nineties
hip-hop serenaded the crowd.

The closest parallel to Ralph Lauren’s Stadium and Snow Beach projects
is Gucci’s collaboration with Dapper Dan, the Harlem designer known for
his “crack-era
classics.”
The collaboration came about as penance after the label was caught
cribbing his designs. In both cases, a big brand recognized that
something exciting had been created outside of—and, partially, in spite
of—its own marketing efforts. For Gucci, it was Dapper Dan’s creative
use of bootleg monogram prints for his urban, minority (and
unacknowledged) customer base. Polo has built its foundation on picking
and choosing elements of British, American, and, to the consternation of
Native American observers, pre-American pasts to reproduce and glorify.
The Lo Lifes have given the brand something that it never really sought:
street cred.

And Ralph Lauren Corporation has noticed. The company’s stock price
peaked in 2013, and sales have been declining. On a recent conference
call with investors, Patrice Louvet, the second Ralph Lauren C.E.O.
since Lauren stepped down, in 2015, said that the company planned to try
“focussing on our icons” and “developing limited editions to inject
energy and excitement into our brand.” One strategy for driving growth,
apparently, is to use streetwear-style hype to gain relevance. That
means acknowledging streetwear-style icons: Thirstin Howl the 3rd,
Raekwon, and the Lo Lifes got a shout-out from the company’s house
publication in stories on the retro drops. Louvet touted the new retro
efforts, noting that “seventy-eight per cent of the people who purchased
Stadium at a Ralph Lauren store in North America were new consumers to
the brand.”

Over the past six months, Ralph Lauren’s retroed versions of other
Stadium and Snow Beach-era pieces have received mixed reviews. Some of
the clothes have been modified: a graphic-heavy jacket received puffer
panels; a taffeta hood got attached to a crested knit sweater. These
pieces have their defenders, but there were also grumblings among ardent
Polo fans that the company should have hewn closer to the original
designs.

A decade ago, Ezra Wine, the owner of the million-dollar Polo
collection, tried to convince Polo to reissue its designs for its
fortieth anniversary. “Their message to me was that Ralph doesn’t want
to be remembered for these pieces, for the Snow Beach and other items
like that,” he said. When the company released a fortieth-anniversary
photo book, in 2007, encompassing what Lauren called “every nuance that
I ever connected to,” there were cowboys and cricket clubs, but no Lo
Lifes. (They’re not in the “revised and expanded” fiftieth-anniversary
edition, either.) Recently, I was standing in a line for wristbands that
would let customers buy the new Stadium pieces, and I met Cherie Ebron,
who has been collecting Polo for twenty-seven years. “He’d better
acknowledge this type of community,” she told me, referring to Ralph
Lauren. “Latinos and Blacks and Indians and people that are not white
America—we made this. We’re the ones who put it on the map.”