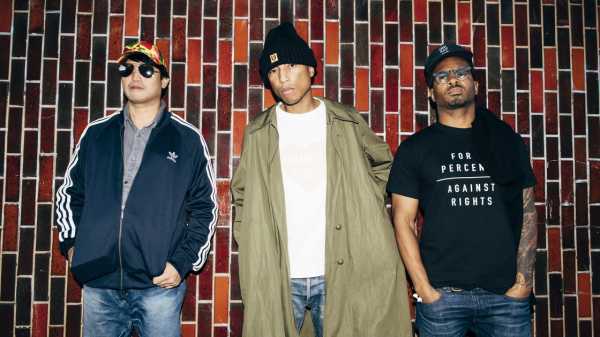 Last year, I spent some time browsing through post-punk and New Wave
albums from the late nineteen-seventies and early nineteen-eighties. I
heard a jagged, wobbly combination of punk, pop, funk, disco, and
sometimes reggae, pioneered by kids too frail for leather jackets and
too forward-thinking to stick to tradition. Even in hindsight, post-punk
and New Wave are hard to get a handle on. My earliest conscious exposure
to the genres came during my sophomore year of college, in the late
aughts, and was largely academic. I’d heard “Clean Clean” and “Whip It” dozens of times, but mostly used as goofy eighties gags in movies and
television. It was when a popular-music course led me to the Raincoats’
cover of “Running Away,” by Sly & the Family Stone, that I knew there
was a rich trove of other singles to dissect. Unlike the strict rules
found in rap, punk, R. & B., and other genres, any sound a keyboard
could emit was fair game for post-punk and New Wave bands—and even that
spectrum was widening, with the proliferation of Moog keyboards and
other synthesizers in the nineteen-eighties. These groups were
particularly fond of toy instruments and robotic filters (Y Pants famously played on a Mickey Mouse paper-drum set), with visuals and outfits that popped as much as the cybernetic sounds did.

So it was a pleasant surprise to hear that Pharrell Williams, on his
most recent N.E.R.D. album, had zeroed in on the same CD section. “Mr.
Williams had been listening to the nervy jangle of post-punk and
avant-punk: Gang of Four, Suicide, Devo, Talking Heads,” the Times reported in a December profile. “Once I identified all my pieces,”
Williams said, “I was like, ‘Yo, I don’t want to make any more linear
songs.’ ” N.E.R.D’s fifth album, “NO ONE EVER REALLY DIES,” released in
December, delights in the aimless, anything-plays spirit of post-punk
and New Wave—an era that Pharrell, Chad Hugo, and Shay Haley watched
firsthand as students of nineteen-eighties MTV. In early interviews,
they’d sheepishly cop to such influences, but the pop-punk sound they
nursed on their few commercial hits (“Lapdance,” “Sooner or Later”) is yards away from the twitchy rhythms found on their latest record.

To make sense of “NO ONE EVER REALLY DIES,” it helps to spend time with
the cartoonish yelps of Devo’s Mark Mothersbaugh on “Uncontrollable Urge” or David Byrne on “Life During Wartime.” Those front men both shout-sing somewhere higher than mid-range; Byrne has mentioned that, on
“Once in a Lifetime,” he evoked the quivering timbre of a southern
evangelical preacher whom he’d taped off of local radio. Fans are used
to Pharrell’s many voices: the falsetto made famous on “Frontin’,” the
breezy and conversational way that he rapped on “Mr. Me Too,” even the
showman croon on “Happy.” But this latest voice, on such tracks as
“Rollinem 7’s” and “ESP,” searches for a slightly goofball tone that
offsets stone-serious messages, like “What possessed the slave to look
in the river / Then he saw his true master, fuck is a ‘mister’?” and
“Detach yourself, repack yourself / Be back yourself, and dream as
yourself.” Many music fans winced at the sight of the new album’s
credits, worried that its several guest slots meant a muddy, scattered
N.E.R.D. project, but the most unexpected voice on it belongs to
Pharrell, who finds new angles for his instrument almost fifteen years
in.

This shape-shifting extends to the album’s production, an unrelenting
tangle of stuttering rhythms, tempo changes, bridges, and every other
misdirection the band can jam in. “Lemon,” the opening track, is the
most generous to pop form, and “Deep Down Body Thurst” takes traditional
N.E.R.D. piano chords and lays them under new, challenging shapes. You
can hear shades of the song’s stomping guitar in the English Beat’s
“Mirror in the Bathroom,” itself a mutation of the ska sound that took
hold in the U.K. “Don’t Don’t Do It!” pushes through its hook in the
same fashion: while the verses are smooth and bluesy, the chorus bursts
open in three steamy riffs. (“Don’t, don’t do it!” “They’re gonna do it
anyway!” “They. Are. Go-nna. Do. It anyway!”) “Kites” is just as
sprawling, bobbing between a double-time punk stomp and trunk-melting
trap as Kendrick Lamar and M.I.A. vent about flying over borders and
walls on both ends of the beat.

These disparate elements don’t start to make sense next to each other
immediately, but a part of the payoff for post-punk’s most cherished
records is the wait: these are albums that demand attention and time to
sort through, like the knotty social issues they often aim to
upend. N.E.R.D. albums themselves are, by nature, a mixed bag. You don’t
get the rewards without the risks—an ethos the band’s members seem to
have accepted long before fame. One of the record’s best lyrics is
“Everything has a cost, did you profit?” So far, “NO ONE EVER REALLY
DIES” appreciates in value with each spin. As in the prescient New Wave
standard “Video Killed the Radio Star,” all the repetition starts to
work. The wide-eyed parables start to sink in. You start to believe the
bad guys really won’t get away.