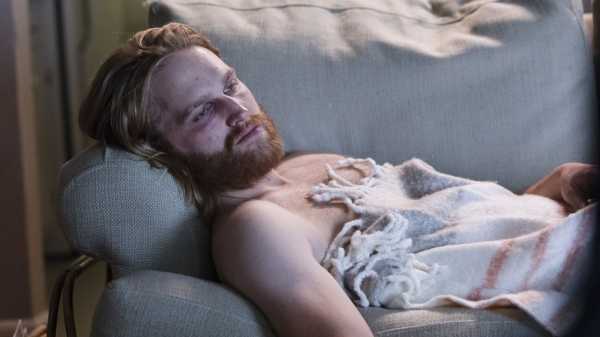 I switched on “Lodge 49,” on AMC, unmindful of the reference in its title, unaware that the creator of the series, Jim Gavin, claims Thomas Pynchon as an inspiration. But the novelist’s inebriating view of California as a territory of high hopes and deep loss is evident from the show’s first acts. It’s in the mood of a streetscape where an open-air hooptie sputters past an endless strip mall, and of a beach scene where the crystalline ocean fails to cheer up a disappointed pier.

In “The Crying of Lot 49,” a housewife trying to execute the estate of her ex-lover, a real-estate mogul, uncovers a secret society called the Trystero; on “Lodge 49,” a surfer stunned by the death of his father, a pool-supplies shopkeeper, stumbles upon the Ancient and Benevolent Order of the Lynx, a fraternal group with esoteric trimmings. Where Pynchon fabricated an industrial giant called Yoyodyne—“a company with factories scattered careless about the country and more government contracts that it really knew what to do with,” he writes in “V.”—“Lodge 49” invents an aerospace company where mass layoffs are under way. The diminishment of the middle class is the great subject of this oddball series, a melancholy hour-long comedy that tries to be philosophical about feeling gloomy.

In Pynchon, sometimes, mysterious sects appear to guide grand conspiracies and orchestrate rococo pranks. Here, the members of the Lynx, its golf-shirted middlemen and good-natured middle managers, are instead victims of the twenty-first-century global economy, which often resembles an elaborate plan to punk them. A captain of industry, called the Captain, haunts the characters’ aspirations for financial success and even survival, but he’s only slightly less remote than Godot. Sometimes his voice materializes on a speakerphone, a bit like Charlie’s on “Charlie’s Angels,” when he’s calling into a meeting about a mixed-use real-estate development project.

The shaggy-doggedness of the story line is impressive given the paucity of plot. As if striving to keep calm enough to meditate, “Lodge 49” achieves a freakishly leisurely pace. It’s slow to develop and quick to linger on sadness and frustration. There’s a warmth in all this dawdling, as if its ingratiating characters are extending fellowship. The bereaved surfer is Sean Dudley (Wyatt Russell), universally nicknamed Dud, who has the fitful blankness and periorbital puffiness of a schwag-headed stoner, although his vice of choice is sipping whiskey while loitering around a doughnut shop as hard light glazes its windows. About a year before, Dud sustained a snake bite on his right ankle—an injury that ended his surfing career, never quite healed, and now throbs like an inflamed metaphor. His father went missing while body surfing, and was presumed drowned; his pool-supply business, loaded with debt, went under with the senior Dudley. Dud’s twin sister, Liz (Sonya Cassidy), a waitress, greets the indignities of her work with the patience of a zombie; Dud, combing the beach for lost treasure and loose change, discovers a signet ring with a heraldic charge of the Lynx, and then his beat-up car runs out of gas in front of their lodge.

In short, money is a major character in “Lodge 49,” and debt is practically its setting. To pay his Lynx membership dues, Dud borrows money, at usurious rates, from his pawn broker. The financial stress of these characters is all the more potent because their ambitions are so modest. Ernie, a fellow lodge member, knows he can turn things around if he can just get a face-to-face with the Captain. For now, he and Dud can only cast longing eyes at billboards promoting that mixed-use real-estate development. The billboard, inviting a thought experiment and exciting despair, asks, “Is there another way to live?”