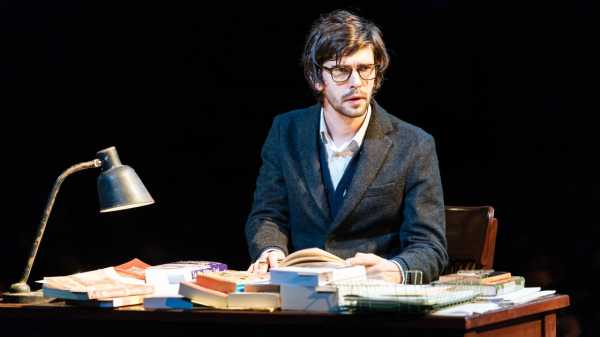 There are two ways to see the new production of “Julius Caesar,”
directed by Nicholas Hytner, that opened at London’s Bridge Theatre last
week. One is to purchase a place in the few scant rows of seating that
are positioned, arena-style, surrounding an open stage on four sides.
The alternative is to opt for a “promenade” ticket, which allows you to
stand in the arena itself, up against the moving platforms upon which
the action of the play is staged, in vivid proximity to the plotting,
the assassination, and the chaos that follows. Several hundred
theatregoers a night get not just to watch the anointing of a populist
demagogue, as envisioned four centuries ago by Shakespeare, but to
participate in it. They congregate in the Forum as Caesar is acclaimed;
they duck for cover as the conspirators murder him in the Senate. (The
death is dealt with guns: this is a modern-dress production.) They stand
by helplessly as Mark Antony’s thuggish supporters give Cinna the
poet—mistaken for Cinna the conspirator—what is darkly known in Britain
as a good kicking. Shouting stagehands urge the audience to press closer
during alarmingly realistic battle scenes, with smoke billowing and ash
falling. Reviewers have been
thrilled, and with good reason: Hytner has enlisted them, too, in the rabble that
is roused.

British theatregoers are likely to have some experience being more than
passive consumers in comfortable seats—or at least likely not to find
the idea completely alien. At the Globe, a reconstruction of an
Elizabethan playhouse on the South Bank, the open-air yard, or pit, in
front of the stage is standing-room only, as it would have been for the
groundlings of Shakespeare’s day. Studying Shakespeare is compulsory for
the British equivalent of middle-schoolers, and students raised in
London have been known to complain about being taken on yet another field trip to the Globe. “Julius Caesar,” in particular, presents its
director with an almost irresistible urge to draw upon the presence of a
real, rather than imaginary, crowd: for centuries, performers have
included the audience among those friends, Romans, and countrymen
famously addressed. The Public Theatre’s Oskar Eustis gave the audience
a dramatic role, too, when he directed the play at the Delacorte
Theatre, last summer, by strategically placing dozen of extras around
the auditorium, so that their chants and shouts of revolution seemed to
arise from the assembly rather than from the stage. The stakes of that
immersive strategy were increased when, partway through the run, the
stage was
stormed by real-life activists offended by the assassination of Caesar, who, as
played by Gregg Henry, appeared as a golden-haired, red-tie-wearing,
self-regarding autocrat.

Hytner’s production, like Eustis’s, makes explicit reference to
contemporary politics, and not just by casting the audience as the mob.
His Caesar, played by the distinguished classical actor David Calder,
makes his first public appearance wearing a red cap, which he tosses
into the crowd, and he takes a Trump-esque pleasure in his own charisma.
The pro-Caesar movement in this production has its own snappy slogan,
derived from a line of Mark Antony. (“When Caesar says ‘Do this,’ it is
perform’d.”) Burly supporters wear black “Do This” T-shirts, looking
like coal miners at a Make America Great Again rally. But Hytner’s
production takes its political motifs from elsewhere, too. The black
bomber jacket that Caesar wears is closer to Joe Biden’s
man-of-the-people sartorial choices than to the bespoke suits of
President Trump. And Calder’s plummy tones suggest that this Caesar is
himself a member of the social and educational élite. His appeal to the
masses will be an irony familiar to any observer of the unfolding of the
British political scene in the past couple of years, in which a folie à
deux conducted between working-class voters and Old Etonian politicians
resulted in the populist debacle of Brexit.

“Julius Caesar” offers, among other things, an unparalleled master class
in the power of rhetoric to sway fickle public opinion. Having slain
Caesar, Brutus—played in this production by a persnickety Ben
Whishaw—gives the crowd his reason: “Not that I loved Caesar less, but
that I loved Rome more.” In taking Caesar’s life, he asserts, he has
saved them from the threat of tyranny; the Romans are so impressed that
they call for him to be named as the next ruler. Then, just as swiftly,
they turn on Brutus after Mark Antony delivers his own funeral oration,
which moves from pathos—“When that the poor have cried, Caesar hath
wept”—to incitement of the crowd to “mutiny,” all the while denying any
such intention. In “Julius Caesar,” crowds are easily and dangerously
moved; and in Hytner’s production, the ways in which the milling,
heel-kicking audience snaps to do what it’s told replicates the
herd-like mentality of the ill-informed and misinformed masses. “We’re
not going to take it anymore!” is the refrain of the raucous Twisted
Sister song that Hytner uses to open his production—a rock band is
hammering away on guitars as the audience files in—but the exact nature
of the “it” with which they are so fed up, beyond a free-floating anger
and resentment of the status quo, is far from clear. That’s what makes
their rage so potent, and so easily tapped by dangerous forces with more
pointed ambitions.

A couple of miles away along the Thames, an almost identical refrain is
being sounded in another acclaimed production of the season: “Network,”a staged adaptation, directed by Ivo van Hove, of the celebrated movie
from 1976. “I’m as mad as hell, and I’m not going to take it anymore!”
is the rallying cry issued by Howard Beale, a television anchorman
turned modern-day prophet, who is played in this production by Bryan
Cranston, of “Breaking Bad.” Beale, whose ratings as a newscaster have
been falling, is fired by his network, UBS. When he tells his audience
the truth—“I really don’t know any way to say it other than I just ran
out of bullshit”—and announces that the following week he will commit
suicide on the air, his rating soar, and he is reinstated not as an
objective authority figure but as a wildly subjective voice of opinion:
the incarnation of television news as entertainment.

“Network,” which was written by Paddy Chayefsky and directed by Sidney
Lumet, was called too preachy by some critics when it was first
released. “There are a lot of changes in the society which can be laid
at television’s door, but soullessness isn’t one of them,” Pauline Kael
wrote, in The New Yorker. But in recent years the movie has been
heralded as a prescient harbinger of reality television and social
media. Its resonances with contemporary themes are clear: what the
corporate quest for television ratings was in the nineteen-seventies,
the quest for clicks and social-media “likes” is today.

Similar to Hytner, van Hove offers an immersive experience, if not one
incorporating an actual pit. As in earlier works, van Hove uses the
audience as an essential element of his mise-en-scène, which is created
with the designer Jan Versweyveld and the video designer, Tal Yarden,
his perennial collaborators. Some theatregoers sit at candle-lit tables
onstage, serving as the denizens of a restaurant in which some of the
action—including one vigorous sexual coupling—takes place. Those members
of the audience sitting across the footlights from the actors are not
exempt from participation, either. In the movie, television watchers
inspired by Beale’s outrage throw open their windows to shout out his
“mad as hell” mantra. At the National, a newsreader turned warm-up guy
for the Howard Beale Show paces the stage, exhorting ticket-buying
patrons to shout the slogan aloud and taunting them when they fall short
on fevor. A cameraman onstage turns his lens onto the audience, which
sees itself displayed on a giant screen onstage: not so much breaking
the fourth wall as pixelating it.

In van Hove’s production, Beale becomes the story’s flawed hero. He
comes across as a sympathetic truth-teller, even as his jeremiads
against corporate power, and his critique of the slavish passivity of
his audience, serve to buttress corporate power through the manipulation
of that very audience. His ultimate, manic heralding of the end of
individualism and the advent of a new, post-democratic commonality—“We
must ask how we can advance the whole rather than ourselves, each one of
us just a tiny node in the grand, glorious network”—may have been
intended by Paddy Chayefsky as satire; now it just reads like a Facebook
post by Mark Zuckerberg. The networks we are in thrall to are not
nationwide chains of television stations but institutions altogether
more pervasive in their reach and more sinister in their effects.

But the problem with presenting Beale as a seer, one who gets the
cultural diagnosis right, is that Beale, as Chayevsky wrote him, gets
the solution gravely wrong. When Beale tells his audience to join and
amplify his cry of discontent—#madashell, as it would be rendered
today—he tells them in the same breath not to concern themselves with
what comes after their full-throated surrender to rage. “All I know is,
first you’ve got to get mad,” Beale says. One thing we know,
post-Brexit, post-Trump—and post-Geert Wilders, the right-wing demagogue
who lead the Party for Freedom in the Netherlands, where van Hove
lives—is that inarticulate fury, once expressed, does not automatically
find its true target and become productive. To the contrary, it is
specifically prone to being harnessed by smoother tongues to yet more
furious, hateful, and divisive ends.

At the very end of van Hove’s “Network,” after the actors take their
bows and as the audience members are readying themselves to leave the
auditorium, a series of television clips is displayed on the video
screen, of the Inaugurations of all the U.S. Presidents since 1976:
Ford, Carter, Reagan, Bush I, Clinton, Bush II, Obama, and, finally, the
incumbent. Having been liberated by the call-and-response element of the
show, perhaps, the audience on the night I was there was vocal in its
approval of Obama—there was applause at his appearance—and in its loud
disapproval of Trump, who was booed and hissed. “I’m mad as hell, and
I’m not going to take it anymore!” one wag called out when Trump’s image
appeared. Too late: mad as hell got us here, and mad as hell is now our
Commander-in-Chief. The demonic genius of our current President lies in
his intuitive understanding of what artists like Hytner and van Hove so
artfully demonstrate: that audiences can be manipulated into doing
almost anything when the experience they are offered is sufficiently,
shockingly entertaining; and that the blurring between entertainment and
politics can be exploited for self-serving ends. Trump is our first
immersive-entertainment President, and we are all groundlings in his
rowdy pit.