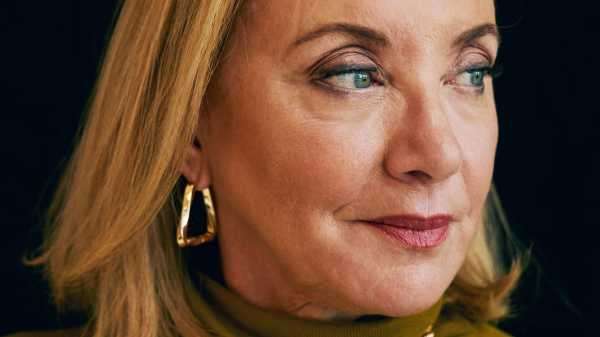 J. Smith-Cameron suggested that we meet for martinis at Bemelmans, the gilded piano bar at the Carlyle Hotel. I couldn’t have chosen better. The place, very old-school and very New York, seemed perfectly suited to Smith-Cameron, who has long been a fixture of the city’s theatre scene and who radiates effortless elegance. (She also smells divine, a trail of Narciso Rodriguez for Her eau de parfum.) Smith-Cameron has lately gained an avid following for her role as Gerri Kellman, the interim C.E.O. (and resident Mrs. Robinson) on “Succession,” the HBO series about a warring New York media family, which is midway through its third season. But few people in the cast are as dedicated to the city as Smith-Cameron, who moved to the West Village from the South in the nineteen-eighties to pursue a life on the stage. With a gift for wacky comic timing and the husky voice of a classic screwball heroine, Smith-Cameron became a stalwart player on the Broadway and Off Broadway scenes—a “bread-and-butter actor,” as she put it. In 1998, she won an Obie Award for her commanding performance as a shifty, melodramatic con artist in Douglas Carter Beane’s play “As Bees in Honey Drown.” Two years later, she married the celebrated playwright turned filmmaker Kenneth Lonergan, and together they became a kind of theatrical power couple, holding court at one of their favorite local haunts, the now defunct Café Loup.

For many years, Smith-Cameron, who is originally from Louisville, Kentucky, and still has a hint of a Southern drawl, operated under the radar. She liked it that way. Her dream, she told me, was merely to keep the lights on with stimulating stage work. She did act occasionally in films, namely in Lonergan’s three-hour 2011 epic “Margaret,” in which she is magnetic as the preening actress mother of Anna Paquin’s protagonist. But it was not until “Succession,” a bona fide sensation, that Smith-Cameron found herself famous beyond her Broadway bubble. Suddenly, hundreds of strangers were responding to her tweets—Smith-Cameron is very active on Twitter—with effusive commentary about her onscreen flirtations with the much younger Roman Roy, the horny scallywag played by Kieran Culkin. At the age of sixty-four, Smith-Cameron finds herself swarmed with “shippers” who make gushing fan art about her character’s sex life. She is loving every minute of it.