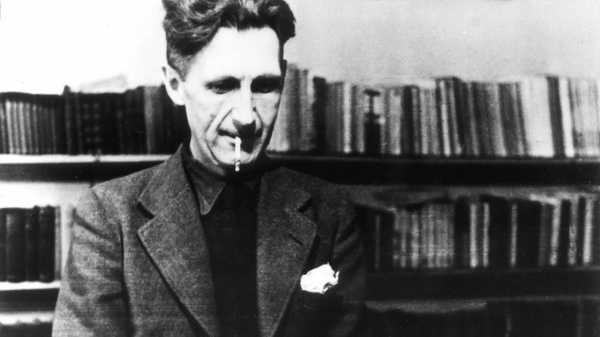 Every so often, George Orwell’s essay “Shooting an Elephant” finds me
and demands a reckoning. The essay, first published in 1936, describes
an incident that may or may not have actually taken
place,
from a period of Orwell’s life, in the nineteen-twenties, when he was
living in Burma and serving as an officer of the Imperial Police Force.
For five years, he dressed in khaki jodhpurs and shining black boots,
patrolling the Burmese countryside—in his own words, “the white man
with his gun, standing in front of the unarmed native crowd.” A normally
tame elephant, in a fit of musth, tears through a village, and Orwell is
called to deal with the situation. After the animal tramples an Indian
man to death, Orwell feels compelled to kill it in front of a gathering
audience.

In certain respects, Orwell recognizes the theatricality of his
position, the repugnance of British imperialism, the fulsome
geopolitical spectacle in which he is “an absurd puppet pushed to and
fro by the will of those yellow faces behind him.” To shoot the elephant
seems to him an act of murder. But to be a white man of authority, a
sahib, is “to appear resolute, to know his own mind and do definite
things.” When Orwell finally kills the elephant, it is not out of
conviction but fear of not acting his part.

I first read the essay years ago, as a student of English literature,
and then, again, as an aspiring writer in English. More recently, I read
it as a reporter on assignment, after riding in a Beijing taxicab while
an exuberantly patriotic radio host held forth on China’s astronomic
ascent since its days as “the Sick Man of Asia.” Twenty-four hours
prior, Donald Trump had arrived in China for his inaugural diplomatic
trip.

It was the phrase “the Sick Man of Asia” that sent me back to Orwell.
The epithet is recognizable to every Chinese child age ten and above,
from history lessons in school. The term is emblematic of the great
shame China experienced after the nineteenth century’s Opium Wars,
when the Middle Kingdom was brought to its knees by the British Empire.
I moved to the States at the age of eight, and I had only a vague notion
of the term prior to my departure, but I learned my lesson during my
first visit back, three years later. In front of a former teacher, a
childhood classmate, aged eleven, asked, with a look that seemed to
teeter between mirth and mockery, “Are you an American now?” When I
stumbled, speechless, she added, as if she’d had the line cued up for
me, “Too good, are you, for the Sick Man of Asia?”

In “Shooting an Elephant,” Orwell explains that his job as a policeman
has allowed him to see “the dirty work of Empire at close quarters,” as
he puts it: “The wretched prisoners huddling in the stinking cages of
the lock-ups, the grey, cowed faces of the long-term convicts, the
scarred buttocks of the men who had been flogged with bamboos.” I
flinched when I first read these words, a dozen or so years ago. This
must have been how China, too, then seemed to the Western world, I
thought: besieged, assaulted, molested, bruised. Even in the early
aughts, it did not seem as if the country’s century of humiliation had
come to a close; China’s rise only made evident how much further it
still had to go. Reading Orwell’s words was, for me, to discover that
those scars of shame had not faded.

I read the essay for a second time when I was in my early twenties. I
had come to some understanding of how complicated history could be, of
the way that the nationalism that the Chinese government tried to
instill in its citizens also shaped the country’s profound sense of a
fall from grace. This time, I underlined the following lines with a
thick black marker: “All I knew was that I was stuck between my hatred
of the empire I served and my rage against the evil-spirited little
beasts who tried to make my job impossible.” Orwell quickly adds that
“feelings like these are the normal by-products of imperialism,” but I
immediately felt a heated confusion. On an intellectual level, I knew
what he meant, and I could imagine his dilemma exactly. But I couldn’t
help the queasiness in my stomach. What was the piece of myself that
recoiled at the thought that a white man could see yellow people like me
as little beasts?

In the Beijing taxi, as the man on the radio chattered, I caught a
glimpse of my reflection in the windowpane, one yellow face in a sea of
many. This is a curious moment to be an American journalist of Chinese
ancestry, when conversation, both global and national, often hinges on
the issue of identity. If I had ever believed that my heritage was
irrelevant to my work, then the weekly e-mails, Facebook messages, and
tweets that I receive commanding me to “go back where I came from” or
questioning my credentials as “an American” disabuse me of the notion.
As do the messages, issued with equal vehemence, apprising me of “the
shame I have caused to the Chinese people.”

Bias is inevitably named as my primary offense: it constitutes the only
point of agreement between those who think I am a shill for the Chinese
government and those who believe I have long been brainwashed by the
West. The charge seems to me both anodyne and anticlimactic. Yes, I see
the world through the lens of a Chinese woman who also happens to be an
émigré. Orwell could only approach life as an Englishman who was born in
India.

A little while back, I had a dream in which I found myself conscripted
as an international spy. None of the cinematic 007 sexiness seemed to
have seeped into my subconscious; instead, I was filled with an
indescribable dread, heightened by the fact that, mid-mission, I
realized that I had forgotten whose side I was working for: China or the
U.S. The only thing clearer than my fear was the imperative not to share
my inconvenient lapse of memory with anyone. I woke up with the sound of
my heart in my ears, sheathed in a thin film of clammy sweat.

My subconscious is not always so heavy-handed. It frightened me to think
that I could don the jodhpurs and boots with my words—but what if, to
counter the possibility, I slid to the other extreme? I described the
dream on Twitter, and someone responded by calling it “the plight of
journalists and translators everywhere.” But my fear was not succumbing
to bias so much as to the invisible force that compelled Orwell to shoot
the elephant. What voice of overarching authority could I, despite my
better instincts, be parroting? And what blinkered narrative, steeped in
craven half-truths—the kind that makes the dissolute soldier in each of
us mutter “little beasts”—might I have absorbed?

“I looked at the sea of yellow faces above the garish clothes—faces all
happy and excited over this bit of fun, all certain that the elephant
was going to be shot,” Orwell writes. “They were watching me as they
would watch a conjurer about to perform a trick.” Every piece of foreign
correspondence involves a bit of conjuring; when performed well, the
trick transports the reader to a place she may have never visited,
acquaints her with people she has never met, and puts her inside a story
she perhaps never knew existed.

But there are cards that a writer shouldn’t hide. A journalist begins in
ignorance, then hews a narrative out of newly acquired knowledge—guided,
in part, inevitably, by who she is, and where she came from. A writer
must confess her own little beasts, or else success, as with a magic
trick, will come at the cost of deception. Orwell knew better than
anyone the price of spectacle. “I should have to shoot the elephant
after all,” he writes. “The people expected it of me and I had got to do
it. I could feel their two thousand wills pressing me forward.
Irresistibly.” For every writer, there comes a moment when the will of
the world presses you forward, so close that you can feel their breath
and words and sweat, tempting you to shoot.