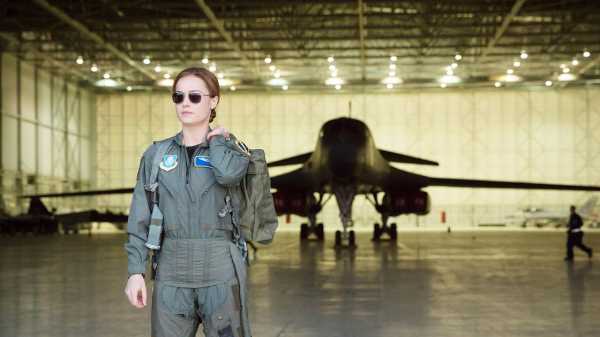 “Captain Marvel” is like a political commercial—it packs a worthy message, but it hardly counts as an aesthetic experience. The message of the film is conveyed less through the story than through its casting: women and people of color need to have starring roles in major Hollywood productions, which, at the moment, mainly mean big-budget superhero movies, the most profitable films in the industry. Its implicit subject is more than representation—it’s also the redistribution of power in Hollywood. There are some secondary (but still significant) messages, too, but the movie itself is, for the most part, trivial. Its significance is what it promises for movies to come.

Brie Larson plays Vers, a warrior from the Kree, a humanoid population from a distant galaxy, centered on the planet Hala, that is in age-old war with the shape-shifting Skrulls. Vers (pronounced “Veers”) lost her memory in the battle that also gave her superpowers; she does not know who she is, and she tries to piece her identity together from disjointed recollections. (The theme is in the air—it’s also the premise of “Alita: Battle Angel” and isn’t handled any better here than there.) She’s haunted by nightmares (urging her to “let go of the past”), but she’s also remanded by her high-handed mentor, Yon-Rogg (Jude Law), to the authorities, an A.I. system called the Supreme Intelligence, where she’s placed on a pod, surrounded by blue tentacles, and mentally teleported to virtual realms in which the woman haunting her dreams (a commanding character played by Annette Bening) orders her back into battle: “Put your people’s needs before your own . . . master yourself.”

Vers’s main weapon is her hot-glowing fists, which issue explosive proton blasts. In her new battle with the Skrulls, she blasts a hole through the spaceship where she’s being held and ends up crash-landing on Earth—right through the roof of a Blockbuster Video store. The action, it’s soon revealed, is set in 1995, and the videotape-filled store (featuring a standing display for “True Lies,” among other contemporaneous titles) inaugurates a skein of nineties-nostalgia objects that figure in the plot, including a RadioShack, a quaint AltaVista search engine, the foot-tappingly fitful loading of a CD-ROM, a pager, and also the soundtrack, which includes tracks by Nirvana, Heart, R.E.M., and others. Yet the most significant nostalgia element is cinematic, planted by the presence of Blockbuster: all of this action is set in an age of superhero innocence, prior to the big-bang birth of the Marvel Cinematic Universe. “Captain Marvel” positions its protagonist as the virtual mother of it all. (Captain Marvel she may be, but, if memory serves, no one calls her by that name in the course of the film—only a title card does so.)

In a parking-lot showdown outside the Blockbuster, Vers encounters the S.H.I.E.L.D. agent Nick Fury (Samuel L. Jackson, whose face is digitally de-aged), explains her battle against the Skrulls, and (after showing off her proton-blasting powers) soon follows him into official archives to read her case file and discover her identity: Carol Danvers, nicknamed “Avenger” (hint hint), who was part of a joint Air Force and NASA flight team that included Dr. Wendy Lawson (Bening). Fragments of Carol’s identity appear to her throughout the film—scenes of frustration throughout childhood and adulthood, struggles at sports and military training, amplified by discouraging and insulting remarks by men. It’s no spoiler to say that what she recovers of her memory is her will to pick herself up, fight on, and succeed—in a climactic, colossal battle in space.

As in “Alita: Battle Angel,” the recovery of identity in “Captain Marvel” is realized with little curiosity or interest. The movie reduces Carol to a half-human, half-Kree fighting machine whose range of remembered experience is limited to the disconnected moments of struggle and overcoming that made her a warrior to be reckoned with. It’s a reductive conception of character that fits all too well with the mild political fiction on which the movie depends. Her ability to overcome her own failures and men’s derision to become a fighter pilot (actually, a test pilot, because—as the movie makes clear—women weren’t yet allowed to take part in combat) is all that’s known of her, and, more significantly, all that she needs to know in order to know herself. (Yet for a tale that makes its protagonist’s military service and training the core of her character, “Captain Marvel” delicately elides the killing part in favor of the rope-climbing part.)

Carol discovers that the Kree’s longtime battles were based on a false premise. The Skrulls, far from being evildoers (or, as one character calls them, terrorists), have been displaced from their homelands by the Kree; they describe themselves as “refugees” and are merely seeking a home. Carol comes to doubt the presumptive virtue of her own nation and to recognize the legitimate claims of its enemies; she decides to return to battle, not to win but to “end it”—to end “the wars, the lies.” In this thread of themes, the Marvel overlords make the political positioning of the movie clear. The marker is made all the plainer when Lawson tells her that the Kree are fighting to defend their “borders.” “Captain Marvel” wants to make clear that it is a Democratic movie.

Carol’s home-away-from-home on Earth is with her former military colleague, Maria Rambeau (Lashana Lynch), and Maria’s young daughter, Monica (played, as an eleven-year-old, by Akira Akbar), who are black. Maria hosts Carol, along with Fury and a Skrull family, and the gathering is both symbolic and troubling. The humans living in the company of Skrulls—who are covered in green stripes—is a heavy-handed metaphor for the cliché of color blindness. (As in, “I don’t care if she has green stripes, as long as she gets the job done.”) But “Captain Marvel” offers a shallow vision of ethnic comity that even a Republican would have trouble arguing with. Nothing is known of Maria’s character beside her military service alongside Carol. Their mutual regard is based in the solidarity of warriors; it’s a professional recognition, not a personal one. In “Captain Marvel,” the forward-looking liberalism has a conservative core; it’s devised to extend the brand’s reach without alienating its base. With its bombastic and boosterish view of the Air Force, “Captain Marvel” resembles a superheroic sequel to “Top Gun.”

Yon-Rogg warns Vers against her own temperament, telling her, “Nothing is more dangerous to a warrior than emotion.” The movie proves otherwise: Vers comes to realize that her own emotions, far from inhibiting her as a warrior, are the very source both of her strength and of her virtue. But, far from endorsing and depicting emotion as such, “Captain Marvel” polices and filters its protagonists’ emotions with a Stakhanovite rigor. The only feelings that Carol is allowed to have, in the course of the film, are constructive ones and productive ones—frustration at failure, anger at insult, determination to succeed, a generalized friendliness toward the like-minded, regret at injustice, and determination once more to overcome it. The movie celebrates the self-punishing efforts of a self-chosen few—and lines viewers up to follow them willingly into battle. Its calculated effect is to inspire an infantilizing hero worship, or, rather, heroine worship, albeit with a welcome new set of idols.

The directors Anna Boden and Ryan Fleck (who are also among the film’s co-writers) display as little style here as they do in their lower-budget and live-action films. The inert direction is amped up by a rapid pace of editing, resulting in a jumpy mosaic that drops significant details with a carefully calculated offhandedness and invites repeated viewings to piece together the puzzle of its narrow drama. This narrative form without style invites and even rewards a mode of bad viewing, a fusion of academic detail-hunting and political sound-biting that masks the insipid and laborious simplicity of the experience at large.

Yet “Captain Marvel,” like most movies of any degree of popularity, packs within it a pure, classical idea. The one at work here is how someone who’s good at something learns to become, simply, good—how a warrior learns to become virtuous without sacrificing her valor. The idea packs great dramatic potential, which makes its facile execution all the more disappointing. It’s one more reminder that the problem with superhero movies has nothing to do with the genre or its source material. The problem is with the corporate anticulture that controls these productions—and the fandom-targeted demagogy that they’re made to fulfill—which responsible casting can’t overcome alone.