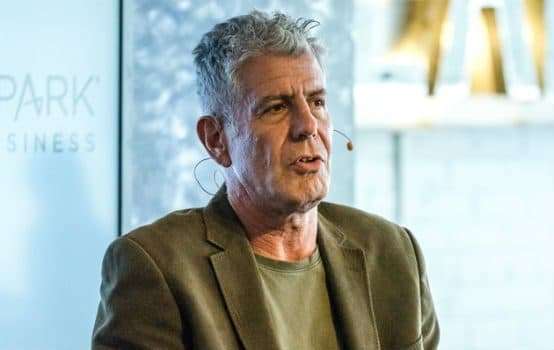 The late Anthony Bourdain was travel guide to the Netflix generation. He was a polymath of appetites, with his relentless output of food, surprisingly elegant prose, and, of course, televised travelogues that took us everywhere in trademark don’t-give-a-shit style. He had the perpetual look of the cool uncle who shows up once a year at the family cookout, Corona dangling effortlessly from his fingers as he regales the kids with vaguely edgy stories of his travels while Mom and Dad listen in with equal parts amusement and alarm. He was the hedonist we imagined we once were and the world traveler we always wanted to be.

He is dead now at the age of 61. His fellow chef Eric Ripert, with whom he’d struck up one of the most imperishable (and silver-haired) buddy comedy acts on television, found him hanging in a French hotel room. The news was announced early this morning by CNN, which airs his show Parts Unknown. And while I’m behind on its latest season, the episode I want to see most is the one where Bourdain visits West Virginia and does his best to understand Trump voters, which can only cement his status as CNN’s best correspondent. While cable news typically represents Trump Country with hack pundits thrust into three-minute American Gladiator-style debates, Bourdain had the audacity to actually go there and listen, as he so often has, secondary to but never invisible amidst those he covers.

Likewise, a typical CNN segment on Iran might feature a screaming chyron, a few boldfaced words read off a Teleprompter, a brief conversation with a reporter in Amman, bada bing, bada boom. Bourdain, in contrast, actually traveled to Tehran and came back with quotidian yet compelling footage of a country few Americans have ever seen up close. Never content to stay on his hotel balcony, he thrived on local eccentricities. His episode in Tokyo, one of my favorites, saw him descend into Japan’s lurid shadows, whisking the audience through a red-light district, a metal concert, dinner with a dominatrix, until the colors on your TV blurred and you started to wonder what exactly you were tripping on. Even his trip to Las Vegas saw him mostly ignore the gilded casinos in favor of dusty watering holes. And there was something wonderfully surreal about watching him traipse around my father’s hometown of Greenfield, Massachusetts, chronicling the opioid crisis that’s so ravaged New England. Even when you’ve been there, Bourdain still does it better.

A chef, Bourdain used food as his point of entry into foreign cultures, which made him a scourge of multinational restaurant chains. He might have swallowed fermented shark and roasted sheep testicle, but the most disgusting thing he said he’d ever eaten was a Chicken McNugget. How to feed America’s poor? Forget Wendy’s, Bourdain said, and bring back street markets the likes of which you find in developing countries, old men tossing roaringly hot frying pans and revelry around every corner. Marshall McLuhan might object that television made those local delicacies local no more, that Bourdain biting into a tamale effectively removed it from its context, packaging it for mass consumption and beaming it around the world. Still, the message of his show was that things are different elsewhere and that this is good, the antithesis of the stereotypical ugly American demanding the Epcot Center version of Europe. If decadent travel shows are to be a thing, Bourdain got his exactly right.

This approach admittedly had its limits. At its worst it slapped cosmetics onto genuinely troubled places whose pathologies defy the parameters of feel-good American television. That was the impression I got after watching Bourdain’s episode on Libya, which brimmed with a democratic idealism that at times crowded out the ugly reality. Bourdain was a political liberal and his narration could stray into platitudes, “deep down we are all the same” and the like. But he was not a modern leftist, dividing the world into identity groups and making assumptions about each. He was a liberal by Robert Frost’s definition, preferring to inquire rather than demand, challenging every country he visited to shake up his preconceptions. An advocate of gun control, he could nonetheless head to the range and fire a Glock without flinching. Indeed, a segment he did with Don Lemon—over drinks, of course—is one of the most measured conversations on guns you’ll ever hear.

Admirers often gushed that Bourdain had the best life: foreign lands, food, beer, what could be better? Yet clearly he didn’t have the best life, and following his suicide we’re left to wonder whether our thirst for voyeurism contributed to his end. Bourdain reportedly spent nearly 250 days per year traveling, a grueling schedule that separated him from his family. Can a man keep up that long without returning home? How wide is the gulf between hedonism’s reality and our perception of it? Yet whatever demons Bourdain was facing, he had already exorcised many more, having pulled himself out of a drug-addled youth when, in his own words, “I was in horrible, endless, irrevocable debt. I had no health insurance. I didn’t pay my taxes. I couldn’t pay my rent.” He was all-American in that way, an up-by-your-bootstraps success story with a hearty sense of adventure still intact. As for me, I may have to settle for being a professional obituarist: first Tom Wolfe, now this. We have now lost two models of brave, out-of-the-office, gonzo reporting in less than a month. RIP.

Matt Purple is the managing editor of The American Conservative.