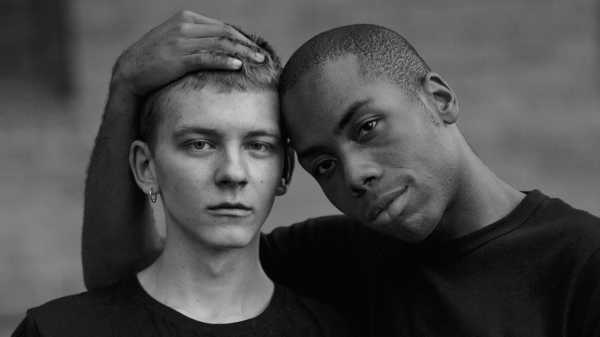 They come to New York City every week, in buses and trains and cars, carrying bags, carrying ambitions, carrying the fabulous clothes on their backs. They’re the fashion kids, the art kids, the theatre kids, the who-knows-what kids—creative renegades of nineteen or twenty or twenty-five. They’ve heard what we’ve all heard: that downtown is dead, that the rent is too damn high, that someone has paved paradise and put up a Duane Reade. Still, they keep coming, against all odds, tricked out in spangles, torn shirts, and tattoos, seeking a place where they can find themselves, and one another.

Ethan James Green, a photographer and former model, was one of them. Then he became one of their more stylish chroniclers. Born in 1990, Green is a counterculture portraitist, alive to a New York that still feels, somehow, like a freewheeling Wild West. His subjects—musicians and designers and all manner of “creatives”—are emissaries from a generation that has bushwhacked new expanses of gender expression and been reared on the self-curating powers of social media. 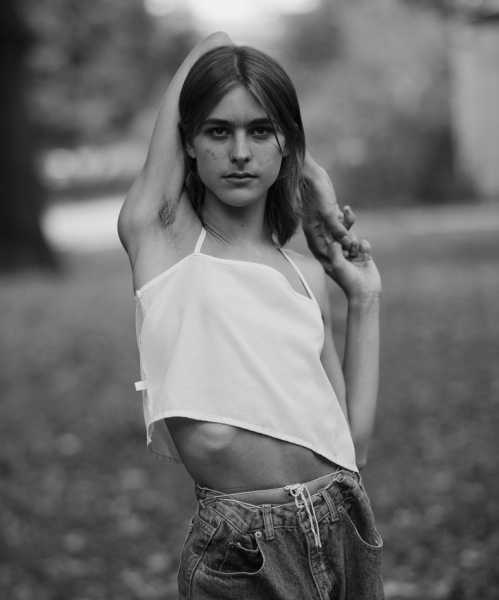 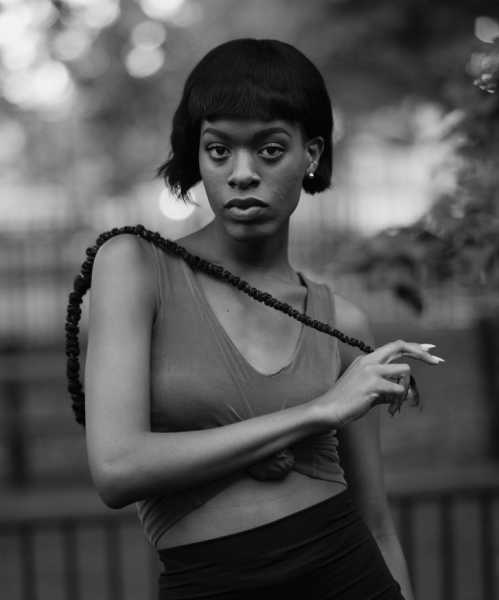 When Green began his project—which is collected in the new book from Aperture “Young New York”—he was a self-described lone wolf, looking for friends. He found them at clubs, at fashion shows, and online. He would invite them to pose for portraits, usually at Corlears Hook Park, where the Lower East Side meets the East River. Green’s subjects are often in states of transition, whether the transition from youth to adulthood or a gender transition, visible in top-surgery scars or budding breasts. Transitions render people vulnerable, but Green’s subjects are confidently beautiful, masters of style and attitude. 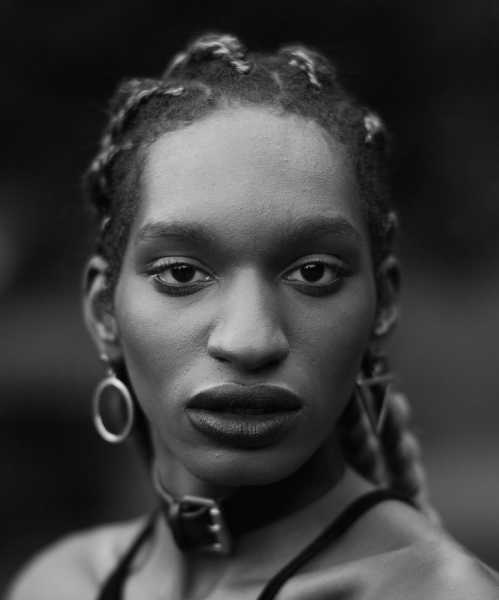 Androgyny has become something of a trend in the fashion industry, which has sought to capitalize on transgender visibility. While Green has a solid foot in the fashion world, having worked as a photographer for brands such as Fendi and Prada, his portraits are neither exploitative nor self-consciously hip. Rather, Green democratizes the glamour of fashion photography, just as his subjects have learned to take what they like from the pages of Vogue and repurpose it on Instagram. Almost as a side effect, his pictures reveal what queer identity looks like in the twenty-first century: multiracial, gender-fluid, and empowered. 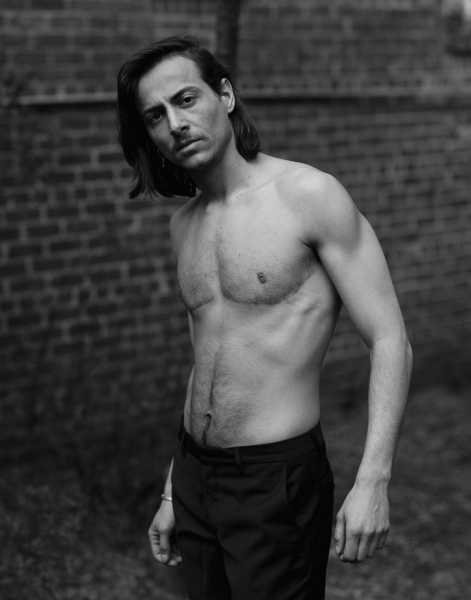 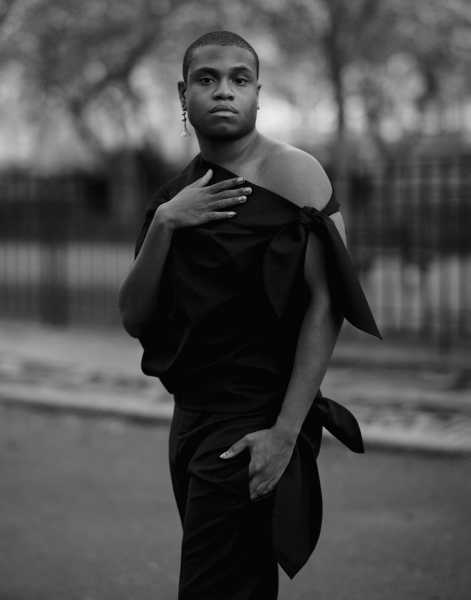 Green grew up in Caledonia, Michigan, a small town outside of Grand Rapids. Adolescence was isolating, as it often is for queer kids. The first day of middle school, in band class, each student had to pick a musical instrument to learn. The boys all chose percussion or brass; the girls chose woodwinds. When Green said “flute,” the entire class turned and stared at him. “It was the beginning of being the ‘different’ one,” he told me. “Being the loner.”

Fashion provided a means of escape. As a teen-ager, Green would frequent the Macy’s in Grand Rapids, and the girls at the cash register would tell him that he should be a model. Rail-thin, he didn’t consider himself a masculine ideal, but, browsing Models.com, he came across bodies like his own. His style was emo and “anti-Abercrombie,” and he’d embellish outfits from chain stores with his grandmother’s scrap fabric. Through his art teacher, he made a new friend named Lexi, who introduced him to another girl, Saira. “Every day after school, we’d drive to an orchard and take pictures, or be in the driveway of one of our houses,” he says. “We were always taking pictures.” 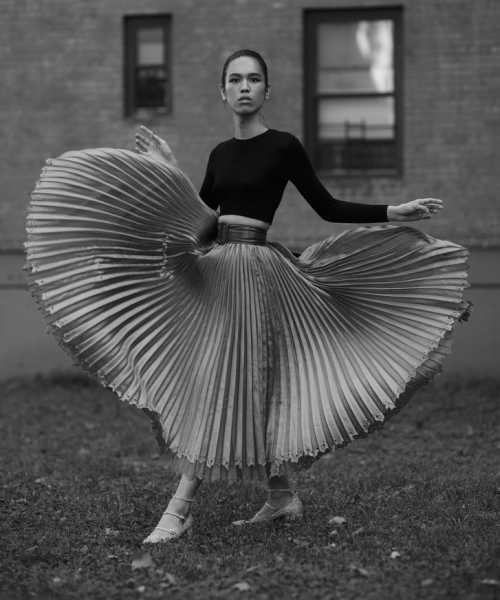 In 2007, when Green was seventeen, his father took him to New York to meet with modelling agencies, and he signed with Ford Models. He moved to the city the following year and booked gigs with the likes of Calvin Klein. He found his way back to photography through the mentorship of David Armstrong, who had captured the sexy and seedy subcultures of disco-era New York, populated by gay men and artists and drug addicts. Armstrong, who was in his fifties at the time, was working on a collection of portraits of young men and found Green through modelling channels. Green soon became Armstrong’s assistant, and Armstrong invited Green to use his place, in Bedford-Stuyvesant, as a testing ground for Green’s own photography. “He believed in me before he even knew what I was doing,” Green told me. 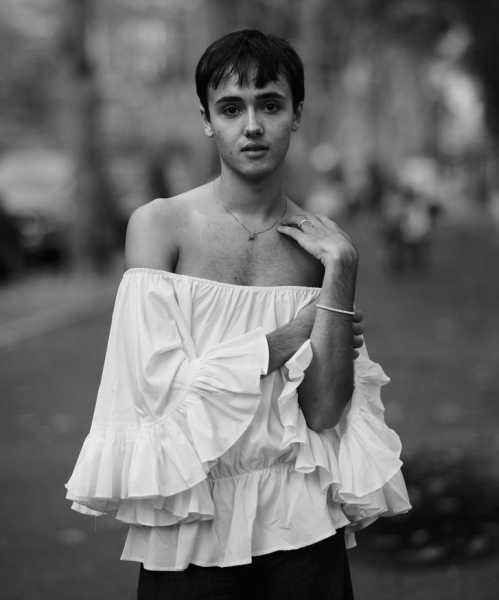 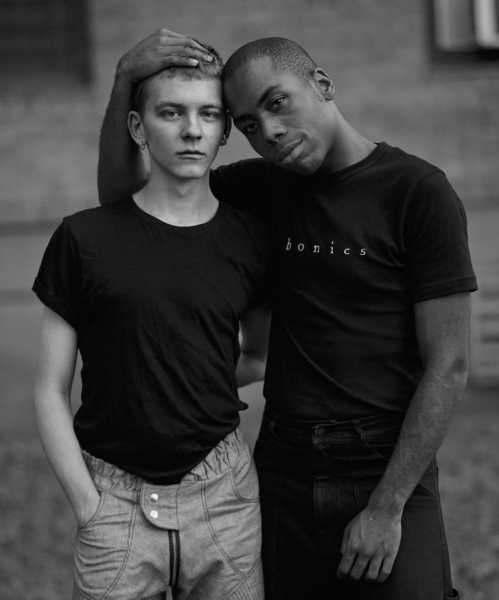 When Armstrong decided to relocate to Massachusetts, Green organized a sale of Armstrong’s prints. Spending day after day rooting through Armstrong’s archives was a revelation. Green decided he wanted to shoot “real people”—meaning the people he found beautiful, not who the fashion world dictated—just like the social circle that Armstrong had captured in his book “The Silver Cord,” published in 1997. “I thought I would look for the equivalents of the people in David’s pictures, but today,” Green said. 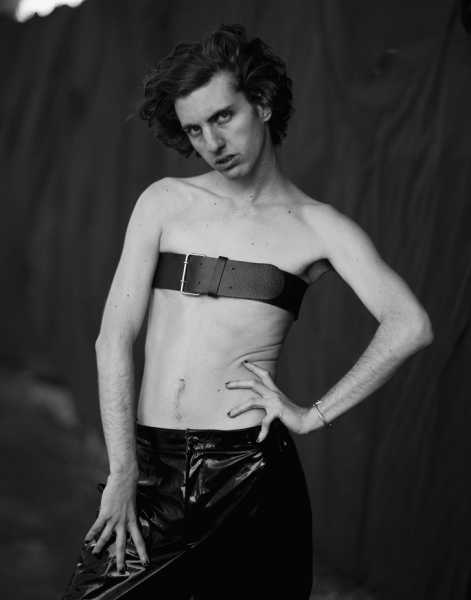 Armstrong died in 2014. That year, Green was at Up & Down, a nightclub in the Meatpacking District. He went outside to smoke a cigarette and spotted an arresting-looking stranger named Hari Nef, who would go on to become the first openly transgender model to sign a worldwide contract with IMG. “I went up to her and I asked if I could take her picture, and she said yes,” Green said. The next time they met, Green asked Nef to bring her friend Ser Brandon-Castro Serpas, an artist. Serpas brought three friends, and those friends had friends, and soon Green found himself capturing not just individuals but a community. 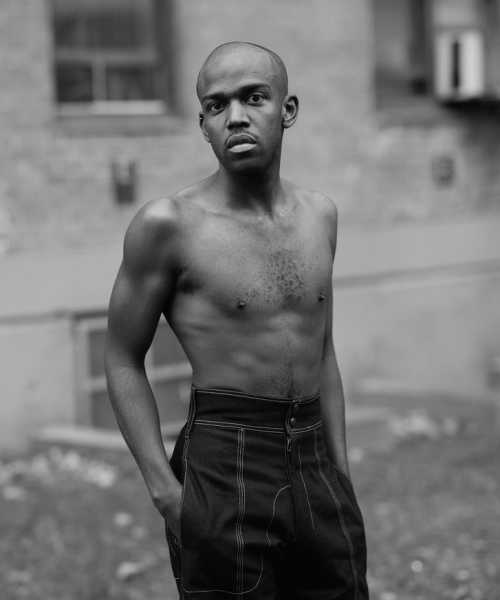 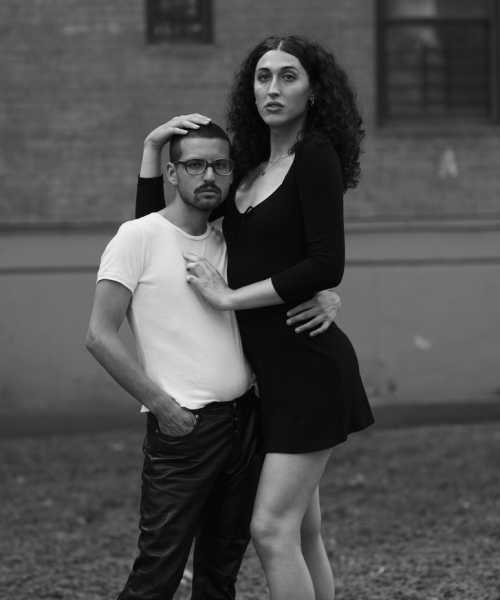 Green’s work is frequently compared to that of Diane Arbus: both are drawn to parks, to gender nonconformists, and to a certain directness of gaze. But their differences are perhaps more telling. Whereas Arbus brought out her subjects’ strangeness—their otherness—Green emphasizes his subjects’ beauty and self-possession, treating them not as specimens but as collaborators and co-conspirators.

“The kids I photograph really, truly believe that they’re the ones that are making New York New York again,” Green told me. “They’re what’s important right now. They’re always going to be important, but, right now, it’s their time.” 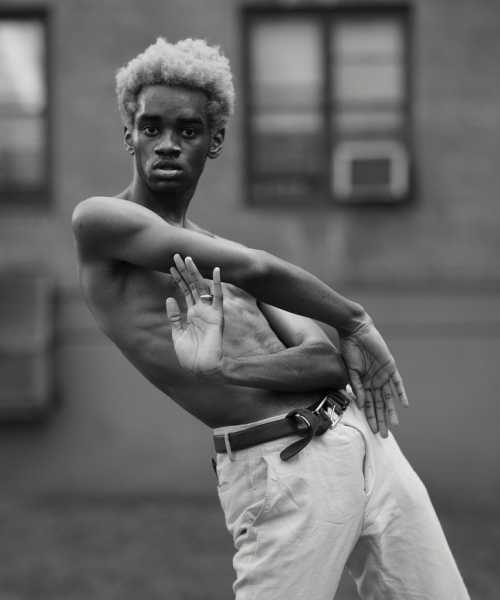 On a sunny day last spring, I met Green at the downtown apartment he uses as a work space. Rows of portraits were tacked up on a bulletin board under a skylight. Green, in sandals, a striped T-shirt, and a denim jacket, sat by a window and blew cigarette smoke through a fraying screen as he waited for three of his newest muses.

The first to arrive was the trans model and musician Torraine Futurum, who was dressed in tuxedo pants, a floral crop top, and rhinestone boots. She was followed by Mica, a trans woman in a blue Prada top, who had moved from Atlanta two years earlier and was between a job in P.R. and helping a friend sell vintage clothing. The last to arrive was Jameel Mohammed, a twenty-three-year-old from Chicago who cut a striking figure: six and a half feet tall, with a bleached Afro, jewelry that he had designed himself, and a mohair jacket. A trained dancer, Mohammed had e-mailed Green two weeks earlier with a photo of himself in an acrobatic pose. This was their first time meeting in person. 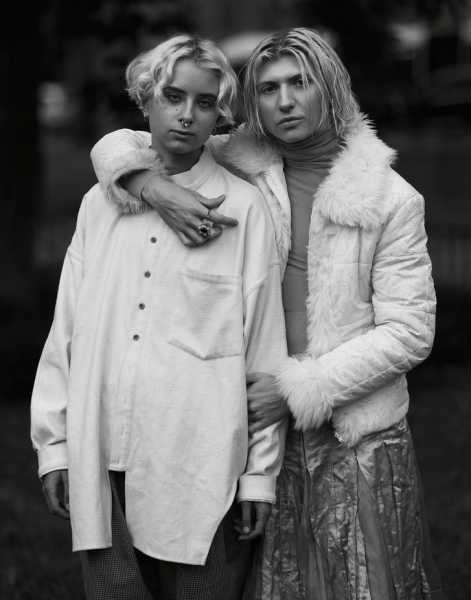 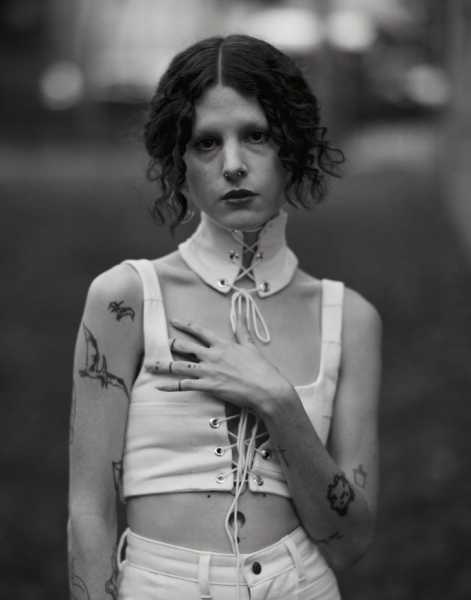 The group walked to a shaded lawn at a nearby housing project. There were few residents walking around, and the ones who passed paid them little mind. Futurum went first. Green cleared away a plastic bag and placed her in front of a brick wall. She put one hand on her hip and fixed her eyes on the camera with a look of confident serenity. “Gorgeous,” Green told her, straddling his legs wide. He wasn’t necessarily looking for candid moments. He shaped and coaxed his subject, feeding her rapid-fire suggestions and compliments: “nice,” “beautiful,” “major.”

“Do something crazy with the arms—make a shape,” he told her. Futurum linked her lithe arms above her head like a serpent. “Gorgeous,” Green said. “Hold that.” 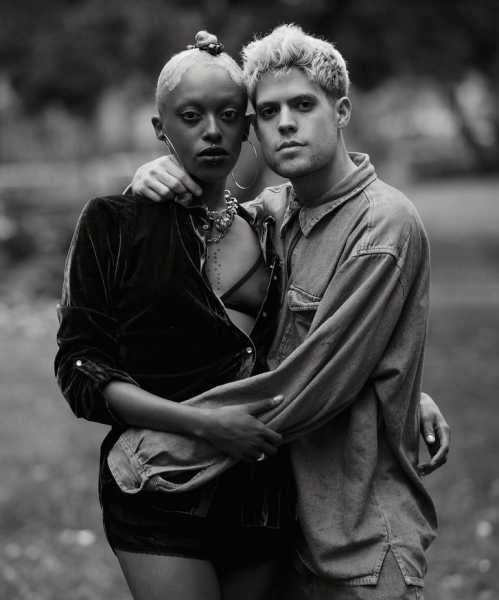 This piece was drawn from “Ethan James Green: Young New York,” which will be out in April from Aperture.