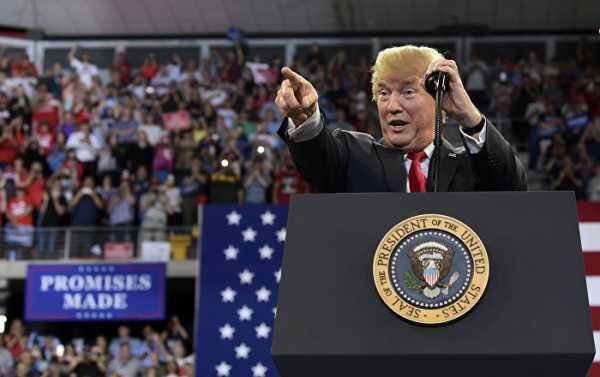 US President Donald Trump tweeted on Tuesday that the newly imposed sanctions against Iran are “the most biting,” adding that in November they would “ratchet up to yet another level.”

In the same tweet, the US president added that anyone, who was doing business with Iran, wouldn’t be doing it with the US.

On Monday night, the first wave of US sanctions targeting Iran’s acquisition of dollar bank notes, trade in gold and other metals, transactions related to the Iranian rial, and purchases of commercial passenger aircraft entered into force.

The day before, EU foreign policy Chief Federica Mogherini and foreign ministers from the UK, France, and Germany said in a statement that the European Union’s Blocking Statute would enter into force on 7 August to protect EU companies doing legitimate business with Iran.

In May, Trump announced that the United States would be pulling out of the Joint Comprehensive Plan of Action (JCPOA), also known as the Iran nuclear deal, signed in 2015 in Vienna by Iran, the European Union, China, France, Russia, the United Kingdom, the United States, and Germany.

In addition, the US president announced the reinstatement of wide-ranging sanctions on Iran, previously lifted under the agreement in exchange for Tehran maintaining the peaceful nature of its nuclear program. Washington’s unilateral move has been opposed by other parties to the nuclear deal.