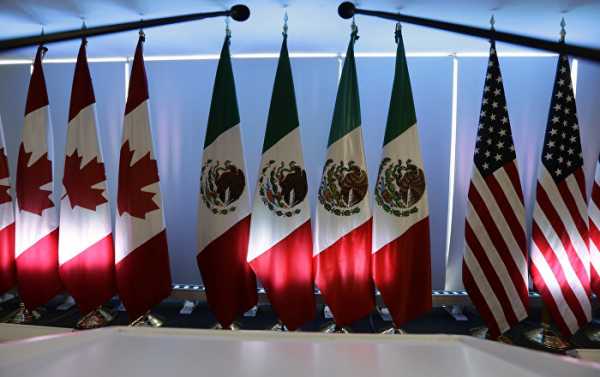 Mexican President Enrique Peña Nieto told US President Donald Trump that Mexico wanted Canada to be incorporated into the United States-Mexico new trade agreement that would become an alternative to NAFTA.

Donald Trump said on Monday that the United States and Mexico had reached a trade agreement, but that it would not be referred to as the North American Free Trade Agreement (NAFTA).

“They used to call it NAFTA, we’re going to call it the United States-Mexico trade agreement and we’ll get rid of the name NAFTA,” Trump told reporters. “It has a bad connotation because the United States was hurt very badly by NAFTA for many years.”

According to Trump, the new trade deal is very special for manufacturers and farmers.

He also noted that Washington had not started working on a trade agreement with Canada yet, as it wanted to see first if the deal with Mexico was possible.

The US president stressed that he would either impose tariffs on Canadian cars or reach a negotiated deal with the Canadian government.

“I think with Canada, frankly, the easier thing we can do is tariff their cars coming in, it’s a tremendous amount of money and it’s a very simple negotiation… I think we’ll give them a chance to probably have a separate deal or perhaps we’ll put it in to this deal,” Trump told reporters.

Canadian officials were motivated by the successful trade talks between the United States and Mexico, which were necessary to renegotiate the North American Trade Agreement (NAFTA), Katie Simpson, a spokesperson for Canada’s foreign minister, said on Monday.

“Canada is encouraged by the continued optimism shown by our negotiating partners,” Simpson said. “Progress between Mexico and the United States is a necessary requirement for any renewed NAFTA agreement.”

In addition, the spokesperson noted that Canada would join the renewed North American Trade Agreement (NAFTA) only if the deal was beneficial for Ottawa.

“We will only sign a new NAFTA that is good for Canada and good for the middle class,” the spokesperson said.

On Sunday, Prime Minister of Canada Justin Tudeau spoke to Mexican president Peña Nieto. According to the Prime Minister’s Office, both officials shared a commitment to reach a successful conclusion of NAFTA “for all three parties”.

Canada, Mexico and the United States have been engaged in talks at Trump’s initiative over the modernization of the North American Free Trade Agreement (NAFTA) for exactly a year.

NAFTA took effect 24 years ago. Politicians from all three sides had repeatedly called for the agreement to be modernized, as e-commerce and digital services have largely re-shaped the trade patterns that were in place when the deal was signed.