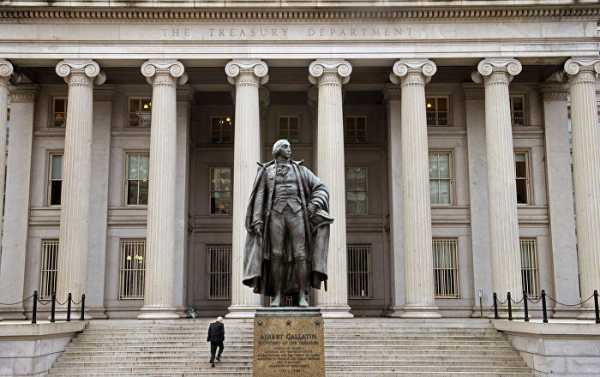 WASHINGTON (Sputnik) – Russia kept roughly the same amount of US bonds in June as it held in the previous month at around $14.9 billion, Treasury Department data revealed.

In June, Russia held a total of $14.910 billion in US Treasury Bonds, according to the database posted on Wednesday. This represented a $5 million – or less than 1 percent – increase compared to May’s total of $14.905 billion.

In May, Russia sold a significant portion — $33.8 billion — of its US Treasury bonds and is no longer among the 33 biggest holders of such bonds, according to the Treasury. In April, Russia sold off $47.5 billion of such bonds.

Member of the Russian parliament’s upper chamber Alexey Pushkov said in July that Russia’s reduced investment in US government debt will help decrease the impact of any potential new sanctions.

In March, Russia also sold Treasury bonds in the amount of $1.6 billion. The biggest change occurred in February when Russia reduced its US Treasury bond portfolio by a massive $9.3 billion. By contrast, Russia in 2017 increased its Treasury bond holdings from almost $70 billion in March to more than $92 billion in December.

China remains the main holder of US Treasury bonds at $1.17 trillion. Japan is second with more than $1.03 trillion.