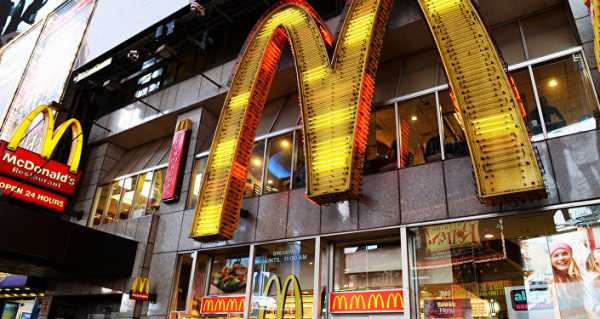 Beyond Meat announced Thursday that it had finalized major distribution agreements with both McDonald’s and Yum! Brands, the parent company of Pizza Hut, KFC, Taco Bell, The Habit Burger Grill and more fast-food brands.

Speaking of the McDonald’s partnership, Beyond Meat Founder and CEO Ethan Brown expressed that he looks forward to serving the international company “as they bring expanded choice to menus globally.”

“We will combine the power of Beyond Meat’s rapid and relentless approach to innovation with the strength of McDonald’s global brand to introduce craveable, new plant-based menu items that consumers will love,” Brown pledged.

The company previously tested a ‘PLT’ or ‘plant, lettuce and tomato’ burger in select locations.

A sign promoting McDonald’s “PLT” burger with a Beyond Meat plant-based patty at one of 28 test restaurant locations in London, Ontario

“Our new McPlant platform is all about giving customers more choices when they visit McDonald’s,” said McDonald’s Executive Vice President and Chief Supply Chain Officer Francesca DeBiase in the Thursday release. “We’re excited to work with Beyond Meat to drive innovation in this space, and entering into this strategic agreement is an important step on our journey to bring delicious, high quality, plant-based menu items to our customers.”

The news release highlighted that KFC “was the first US quick-service restaurant to introduce plant-based chicken” when it debuted buckets of ‘Beyond Fried Chicken’ in major southern US cities like Atlanta, Georgia, and Nashville, Tennessee, in 2019.  will reportedly expand its meatless menu under the new distribution deal.

The meatless burger debuted nationwide in August 2019 – following a limited rollout that began on April Fool’s Day – but was quickly rejected by vegans due to the inclusion of mayonnaise, which includes eggs, and the fact that it was cooked on the same broiler as Burger King’s chicken and beef products.