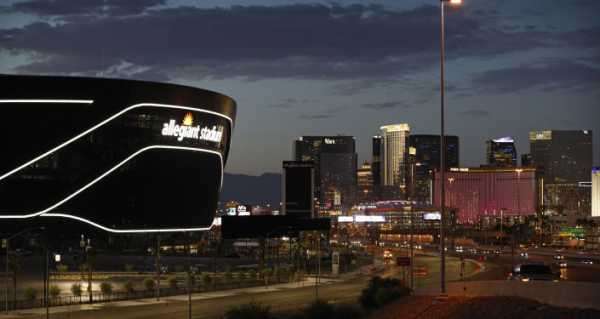 Officials have said the Allegiant Stadium in Las Vegas – the new home of the Raiders NFL franchise – is almost complete and ready for action. The Raiders have moved from Oakland, California, but they arrive as “Sin City” is struggling with the economic consequences of the coronavirus crisis.

The owner of the Las Vegas Raiders has said there is still a “punch list” of items which need to be fixed but the US$2 billion stadium, at the southern end of the famous Strip, will be ready for Monday Night Football next month.

The stadium’s debut was due to be a sold-out concert by country singer Garth Brooks concert on 22 August but it has been put back until February because of the risk of spreading the virus.

​So the first event at the stadium – which is sponsored by a Las Vegas-based airline – will instead be an NFL game between the Raiders and the New Orleans Saints on 21 September.

It is unclear whether that game will go ahead behind closed doors because of COVID-19, which continues to spread through the US – only 835 people have died in Nevada but more than 9,000 have died in neighbouring California.

Mr Velotta said The Strip would give the stadium a unique backdrop.

In 2016 Davis – who inherited the Raiders from his father Al – decided to quit Oakland and move the franchise to Las Vegas after millions of dollars of public money was pledged for a new stadium.

Yeris Majail, who is 39, has supported them since he was a boy: “Raider Nation ’til I die, but it does hurt.”

​He lives in Oakland and says: “I grew up rooting for the LA Raiders and then they came back to Oakland and now they’re leaving again.”

Mr Majail blames Oakland’s Mayor, Libby Schaaf, and said: “Oakland should have definitely done more, but it seems like the mayor just wanted to keep the A’s (baseball team) in town.”

He said: “Raider Nation is more than just football. It’s a big family We have fans all over the world.”

Mr Velotta said the stadium cost US$2 billion to build but he said $750 million of that was public money.

The Governor of Nevada, Steve Sisolak, said last week: “This stadium has already proved to be a great thing for this community, including the creation of many jobs.”

The 62-acre site chosen for the 65,000-seater stadium – opposite the Mandalay Bay casino – had originally been considered for a train station which would have linked to a high-speed rail connection to southern California.

While Raiders fans in Oakland have naturally been less than keen on the move, the reaction in Nevada has been positive.

​There is also a hunger for normality in Las Vegas, after a year which has seen an unprecedented downturn in visitors to the gambling mecca.

Mr Velotta said: “Because Las Vegas is so dependent on tourism, the coronavirus has produced a financial disaster in addition to a health crisis. It’s difficult to calculate just how much damage has been done.”

He said the state’s casinos were closed for 78 days and the Nevada Gaming Control Board estimated US$1 billion a month in revenue had been lost in April and May, when everything was shut down.

“That doesn’t count the lost revenue in restaurants, many of which have been closed, and all entertainment shows,” said Mr Velotta.

​He added: “The convention industry has been devastated. Convention visitors normally fill hotels at midweek but because meetings larger than 50 people are banned, just about all the conventions have been cancelled.”

Las Vegas received another body blow last month when CES, a massive technology show, announced it was switching to virtual in 2021, which would mean a loss of 175,000 conventioneers over a four day period.

Mr Velotta said because so many casino and restaurant workers were unemployed or furloughed, there was very little sales tax being collected, which had put a $US1.2 billion hole in the state’s budget.

But the stadium is a sign of hope and optimism and it is hoped in the future it will host not just NFL games and concerts but also boxing and MMA bouts, possibly including mega-fights like Tyson Fury or Deontay Wilder against Anthony Joshua.

​Mr Velotta warned: “It would have to be an extremely compelling draw to fill the number of seats the stadium holds. With seating on the floor, the building could easily fit 80,000.”

He said: “2020 was supposed to be our year. We were looking at record visitation in both leisure and business travel…But Las Vegans are an optimistic lot. We’ve rebounded from 9/11, the great recession and the 1 October shooting (in 2017, when 58 people were killed by a sniper on the 32nd floor of the Mandalay Bay resort).”

Mr Velotta said: “This is a bigger challenge than those because the drops have been so steep but Las Vegas is well known for its resilience and most believe that will be the case after the pandemic is no longer a danger.”