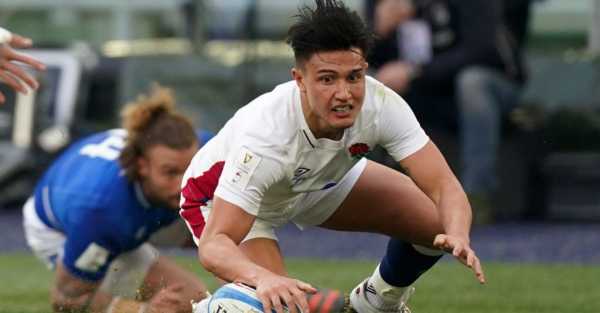 England showed the ruthless streak demanded by Eddie Jones as they atoned for their loss against Scotland by hammering Italy 33-0 at the Stadio Olimpico.

Jones had urged his team to “light up Rome” and in response they delivered a five-try rout orchestrated by man of the match Marcus Smith to inflict a 34th successive Championship defeat on the Azzurri.

England had stormed 21-0 ahead by half-time and Smith was at the heart of many of their best moments, but he truly shone when firing a superb missed pass to provide Elliot Daly with a simple try in the 45th minute.

And unlike at Murrayfield a week earlier when he was replaced in the 63rd minute to widespread puzzlement, there was no sign of George Ford arriving off the bench until late on and this time Joe Marchant made way.

Ben Youngs eventually joined him at half-back to equal Jason Leonard’s record as England’s most capped player on 114 appearances, with the round-three visit of Wales to Twickenham the likely setting for him to surpass the milestone.

But, having replaced Harry Randall, Youngs entered a team that were in the midst of losing their way as Italy discovered renewed purpose to spend long spells camped in opposition territory, albeit with little end product.

Italy defended manfully for stretches, and it took resilience to hold out against a sustained attack on their line in the first half, but they were also wasteful with the chances they created.

They traditionally provide stiff opposition for an hour until eventually being worn down, but it took just nine minutes for England to get off the mark when Max Malins and Smith combined for the fly-half to score.

Smith was looking to run the ball at every opportunity, but Italy also produced flashes of danger and, had their passing been more accurate, in the 17th minute they would have been over.

Jack Nowell was involved in much of England’s best work, but he failed an HIA following a tackle and was replaced by Daly.

To underline the threat of complacency, wing Federico Mori escaped down the right and might have crossed had Smith not made his covering tackle, but England were soon back on top.

The maul had been an effective weapon against Scotland but an attempt to launch it on the half-hour mark proved unsuccessful before Itoje had a try chalked off for offside.

The first half finished with George using his strength to claim his second try but the damage was done by slick handling and a piercing run from Freddie Steward.

It began to look ominous for Italy as Randall weaved a path into space and their scrum conceded a penalty and, when England opted for the set-piece again, Smith flashed his classy long pass for Daly to score.

Wing Montanna Ioane caused havoc in the visiting defence, showing real gas until he was well tackled by Steward who, as the last man, needed to get the hit right.

Ioane’s run launched a period of Azzurri dominance that England just could not shake off and even Smith made a mistake as he knocked on in contact, but a breakaway try from Kyle Sinckler eventually completed the victory.