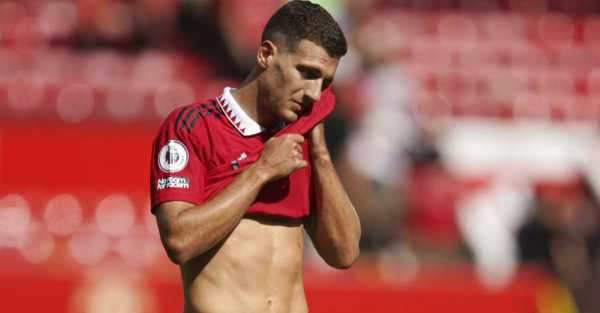 Manchester United defender Diogo Dalot is confident positive results are just around the corner despite the defeat to Brighton.

All the optimism for the start of a new era under Erik ten Hag and a positive pre-season were wiped out in a desperate first 45 minutes at Old Trafford that very much belonged to last season.

An Alexis Mac Allister own goal after the break, which Dalot played a part in, got United back in it, but Ten Hag was unable to avoid defeat in his first competitive game in charge.

This is the start of a very big rebuilding job for the Dutchman, but Dalot believes results will not take long to come.

“Obviously, that is what we are here for,” he said. “This result is not going to take our heads off the path we need to do.

“It is a setback but in football you don’t have time to think a little bit, now we have to analyse and definitely do better.

“There were still some positives, the second half we had some good plays, we were a little bit more organised. We are going to have some time this week to organise and definitely do better for Brentford.”

United fans suffered more misery and they booed their team off at the interval and full-time and Dalot knows the players have to start delivering.

“That is what we need to do and that is the aim that we want to win games, control games and have the fans with us for 90 minutes.”

While the narrative will be about United’s struggles, Brighton were full value for their three points.

Despite losing star players Yves Bissouma and Marc Cucurella this summer, Graham Potter looks to have a team capable of pushing on from their ninth-placed finish of last term.

Defender Adam Webster added: “We finished last season so strongly, we lost a couple of players but the squad and the togetherness we have got here is brilliant and just shows the team spirit we have.

“Everyone is fighting for each other, everyone has come in and slotted straight away. It is a great group to be a part of.

“It is a great start, as cliched as it sounds we have just got to take each game as it comes. We want to try and improve every year and if we can do that it will be great.”