The White House said Monday that it will communicate "directly" to Beijing its unease with China's recent military exercises as tensions rise higher over Taiwan in the wake of House Speaker Nancy Pelosi's trip to the self-governing democracy.

President Joe Biden said Monday morning that he "not worried, but I'm concerned that they're moving as much as they are" when asked about China's recent maneuvers around Taiwan, an island that China considers a breakaway territory.

"But I don't think they're going to do anything more," Biden said.

The U.S. does not officially support Taiwanese independence but maintains unofficial and military ties with Taiwan — a decades-old strategy kinked by Pelosi's visit last week, the most high-level trip by an American in decades.

China has launched massive drills around Taiwan, including missile launches over the island and a substantial mobilization of its surrounding naval forces.

In response, Taiwan has said it will conduct its own live-fire artillery drills.

Pelosi, D-Calif., arrived in Taiwan on Aug. 2 intending to underscore Washington's commitment to Taipei but infuriated China. She also made appearances in Japan, South Korea and more during her trip and said she was focused on "advancing a free and open Indo-Pacific region."

When asked about Pelosi going to Taiwan, which Biden previously said the military had concerns about, he only said Monday that "that was her decision."

White House press secretary Karine Jean-Pierre expanded on Biden's remarks during a press gaggle later Monday, saying that he was uneasy over the chance that China may miscalculate some of its military drills — and blunder into a broader problem.

"They [the maneuvers] are they are provocative, irresponsible and raise the risk of miscalculation," she said. 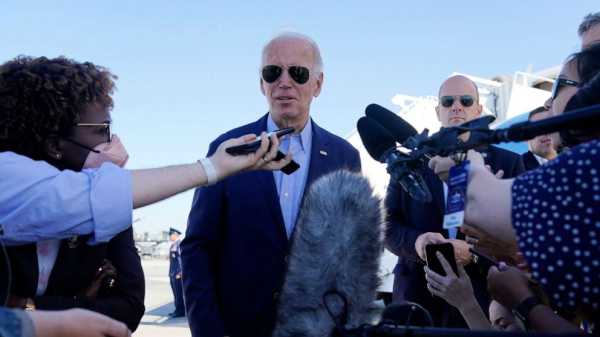 President Joe Biden speaks to the media before boarding Air Force One for a trip to Kentucky to view flood damage, Aug. 8, 2022, in Dover Air Force Base, Del.Evan Vucci/AP

It was not immediately clear at what level such conversations would take place. Biden and Chinese leader Xi Jinping last spoke on July 29 about tensions over Taiwan. The diplomatic relationship between the U.S. and China frayed further after Pelosi's trip, with China canceling its dialogue on climate and military issues and each country summoning the other's ambassador.

Colin Kahl, the Pentagon's top policy official, separately said Monday that he believes Beijing has been trying to "coerce the international community" into a "manufactured" conflict in Taiwan.

"We're not going to take the bait and it's not going to work. So it's a manufactured crisis, but that doesn't mean we have to play into that," he told reporters.

Washington's relationship with Taipei is dictated in part by the Taiwan Relations Act, which mandates that the U.S. bolster Taiwan's defenses. However, the U.S. also operates with "strategic ambiguity" on the island's conflict with China.

MORE: China keeps up pressure on Taiwan with 4th day of drills

"What's important for us right now is to make sure that Beijing understands that our forces in the region will continue to operate, to fly, to sail wherever international waters allows," Kahl said. "We will continue to stand by our allies and partners … even as China tries to kind of chip away at the status quo."

Secretary of State Antony Blinken also weighed in on Monday, saying at a press conference, "The reaction now by China with regard to Taiwan and the military actions it's taken, allegedly in response to the peaceful visit of a member of our of our Congress — that too doesn't help things, nor does the fact that China has been ceasing cooperation with the United States on dealing with climate change."