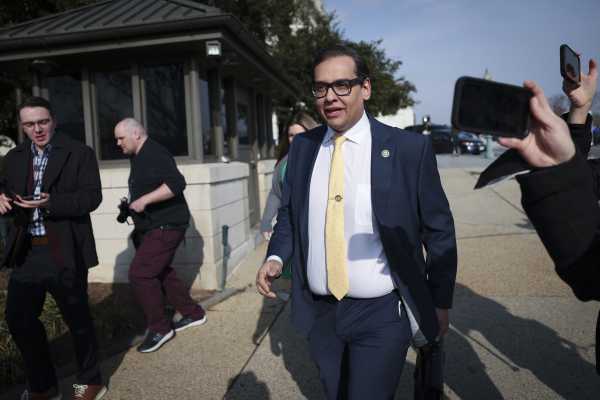 Ben Jacobs is a political reporter at Vox, based in Washington, DC. Ben has covered three presidential campaigns, as well as Capitol Hill, the White House, and the Supreme Court. His writing has appeared in publications including New York magazine, the Atlantic, and the Washington Examiner.

In ancient Jerusalem, an aged King Solomon observed “there is nothing new under the sun.” Solomon never knew George Santos.

Thanks to revelations about a seemingly endless series of lies about his background, the newly elected Republican Congress member from Long Island has been a phenomenon without any precedent in American history. Within weeks of taking office, he’s become a national celebrity without really doing anything. It’s not that he has actively courted the limelight in the way that figures like Reps. Marjorie Taylor Greene (R-GA) or Alexandria Ocasio-Cortez (D-NY) when they attracted a media frenzy as first-term members of Congress. It’s simply that his story is so fantastical and absurd that there are no clear precedents for it.

Since the New York Times first reported on Santos’s lies about his religion, his education, and his résumé in late December, things have spiraled. Almost every aspect of Santos’s life has been drawn into question and his attempts to explain have grown increasingly labored — from his punchline-worthy attempt to insist that he never said he was Jewish, but that he was “Jew-ish,” to his initial firm denial of having dressed in drag as a young man in Brazil before eventually conceding to reporters at the baggage claim at LaGuardia Airport that he just “had fun at a festival.”

Santos’s lies have also resulted in investigations from local and federal law enforcement agencies. The New York Republican is staring down questions over his campaign finances and how he was suddenly able to loan his congressional campaign $700,000 after being evicted for failing to pay rent as well as being taken to court for failing to pay debts. There are complaints about his conduct filed with the Federal Election Commission and the House Ethics Committee. There also is the outstanding question of a decade-old criminal charge in Brazil. Santos has denied this, telling the New York Post, “I am not a criminal here — not here or in Brazil or any jurisdiction in the world.”

Sean Wilentz, a Bancroft Prize-winning historian at Princeton University, told Vox that Santos was more a character out of American literature than American history, citing Herman Melville’s The Confidence-Man. “This is nothing that a historian can be much help on,” he said. “There is no example like it.” It’s not that Santos was an entirely foreign object — the huckster is an American archetype, and nothing is more clichéd than a dishonest politician. As Wilentz put it, he’s “made of materials that one can identify.” But that such a shadowy figure and compulsive liar wound up on Capitol Hill is still remarkable. “Embellishing happens a fair amount that a lot of people get away with,” Wilentz said. “This is a different order because this is a made-up life.”

He noted that “it’s one thing to be Marjorie Taylor Greene and making up all of this crazy stuff, and here you just have a cipher.” Using another literary reference, Wilentz compared Santos to the “kind of nothing man that drips all through the novels” of John le Carré.

Santos has been left in an unusually isolated political position. Local Republicans in and around his district have called on him to resign, and the defenses offered of him by national Republicans are lukewarm — rooted in procedure and precedent rather than any sincere attempt to defend Santos on the merits.

Santos jokes have become one of the few things that both parties can agree on. As one member of Congress told Vox, “you have Democratic members and Republican members texting memes of Santos to one another. He’s truly a bipartisan joke.”

Yet it’s also made him a national figure. In a poll from early January from Navigator Research, a majority of Americans had an opinion on him, making him better-known than far more established and influential politicians like Reps. Steve Scalise (R-LA) and Jim Jordan (R-OH). Another recent poll from Data for Progress showed that over 60 percent of Americans had an opinion of him, even more than Greene. Of those who had heard of Santos, they invariably had a negative opinion of him — even Republicans had an overwhelmingly unfavorable view of him. In his home state, polling found that Santos was far more well-known than Hakeem Jeffries, the top Democrat in Congress, and that he’s just as politically toxic in New York as he is nationally.

It’s a level of celebrity that is breaking through beyond politics. Santos has already become a staple of late-night television comedy — he’s served one month in Congress and has been a character in two different Saturday Night Live sketches — and an obsession of #resistance Twitter and MSNBC. His office on Capitol Hill has become the site of a constant media stakeout and TMZ cameras follow him at the airport. Even Santos is self-aware about his newfound status and has privately expressed his angst about turning into a meme.

There is no telling what strange paths the Santos saga will take next. In recent days, he has been tied to the cousin of a Russian oligarch (who accused Santos of scamming him) and accused of defrauding a homeless veteran by pocketing the money from a fundraising drive for the veteran’s service dog. (Santos has denied this.)

Almost every twist and turn his saga has taken so far has gone into uncharted territory. While Congress has provided nearly two and a half centuries of scandals, they’ve all had familiar roots in common human traits like ambition, sex, or venality. The chair of the House Ways and Means Committee watching a stripper dive into the Tidal Basin after being caught drunk in a car with her is unusual, but alcoholism and adultery less so on Capitol Hill. Even the more archaic crimes — like the 18th-century senator who plotted with the British to conquer then-Spanish-controlled New Orleans — come from impulses like greed or lust for power that are demonstrated daily by elected officials in both parties.

But Santos is something different. The level and frequency of his seemingly compulsive inventions mark new territory in modern politics.

In the aftermath of his election, it’s hard to think that there will be future members like him — there will likely be more robust efforts to check that when aspiring politicians claim to be star collegiate volleyball players, they haven’t simply made up the fact they attended college, let alone played competitive sports there. But if one does get elected in the future, at least historians will have an analogy.