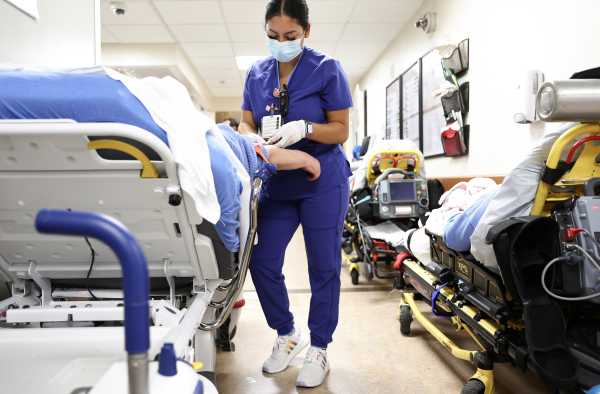 Dylan Scott covers health care for Vox. He has reported on health policy for more than 10 years, writing for Governing magazine, Talking Points Memo and STAT before joining Vox in 2017.

Terry Scoggin, CEO of Titus Regional Medical Center in Mount Pleasant, Texas, saw his first Covid-19 surge in May 2020, when an outbreak at a meat processing plant filled almost all of his small hospital’s ICU beds.

But the worst of the pandemic didn’t come until 2022. By January, the hospital, the last independent rural hospital in northeast Texas, had lived through four separate surges in 18 months. They had reopened their building’s third floor, closed eight years ago, and relied on traveling nurses to staff their beds. Then, at the end of 2021, the government funding that had paid for that extra help ran out.

For the first two months of 2022, as patients lined the building’s hallways and his staff struggled to find anywhere else to send them, Scoggin said his hospital experienced its most traumatic trial yet.

“We didn’t have the staff,” Scoggin told me. “People were dying and you couldn’t get them out.”

But Scoggin isn’t just worried about the strain his hospital is under right now. He worries about how three years without a real break — five Covid surges, a monkeypox case that forced his facility to prepare for a wider outbreak, and now a nasty wave of RSV and flu — is compromising his ability to plan and prepare for the future.

The pandemic pummeled hospitals like his. Titus serves its hometown of Mount Pleasant, population 15,000, as well as 70,000 other residents in Titus County and four surrounding counties. Four hospitals within 35 miles of his facility have closed in the last eight years. TRMC is a medical oasis in northeast Texas; sometimes they will even see patients from just over the border in Arkansas, Louisiana, or Oklahoma.

TRMC has a 70-year-old building in desperate need of updates, including a $500,000 repair to the building’s elevators, and the kitchen should be remodeled, Scoggin said. But the impact of the last three years extends well beyond the hospital’s walls. Three years of constant crisis means the hospital hasn’t been able to invest in outpatient care proven to avert bigger problems for patients later on.

“We’re sick” is the way Scoggin summarizes the health challenges of the community his hospital serves. Nearly one-third of people in Titus County are uninsured. It is a majority-minority area, 45 percent Hispanic and almost 10 percent Black.

Building the infrastructure and hiring the staff to help people better manage their health — and, eventually, start to prevent chronic health conditions in the first place — requires years of work and planning. Those plans have been set back years, in a community that was already struggling. 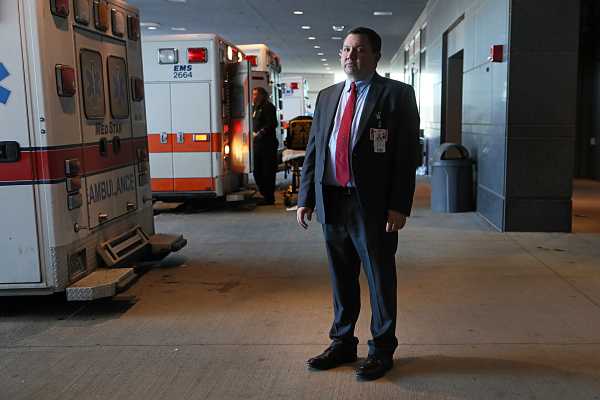 He’s not alone. Hospitals across the country have experienced near-constant crisis. In addition to the persistent threat of Covid-19, there were unexpectedly brutal waves of RSV last summer and again this fall. Monkeypox put hospitals on high alert for a very different kind of infectious disease. Then there were the one-off disasters, like the hurricane that struck St. James Parish Hospital in the Louisiana Delta and cut them off from the world for two weeks.

Hospitals postponing plans to install a new medical records system or build a new primary care clinic might not sound like the most urgent problem, given the current wave of respiratory illness straining the US health care system once again. But in small communities like these, the local hospital may be the only entity in a position to make those investments — investments that are critical for the long-term health of their patients. Research shows time and again that better access to preventive and primary care leads to better outcomes.

The fragility of the US health care system was laid bare by the pandemic. And heading into 2023, there is little sign of relief for overworked and overwhelmed health care providers. Think of it as a cumulative health care debt: for every clinic that can’t be built or every health program that can’t be planned, Americans could be worse off in the years to come.

Small community hospitals were struggling before Covid-19. and the pandemic has only made their predicament more precarious. More than 130 rural US hospitals have closed in the past 10 years, and hundreds more are projected to be in danger of closing. According to one report from the University of North Carolina’s rural health research program, about 30 percent of all US hospitals were operating in the red as of 2018. A majority of them are located in rural communities.

Scoggin has felt the same staffing challenges as other hospitals around the United States. He hired 75 nurses from traveling agencies over the course of the pandemic to keep his emergency, ICU, and labor and delivery departments adequately staffed. The hospital’s labor costs have risen upward of 20 percent.

But there are also subtler ways in which the constant crisis of Covid-19 compromised hospitals’ ability to best serve their patients, by altering some operations permanently and postponing many other projects and plans. 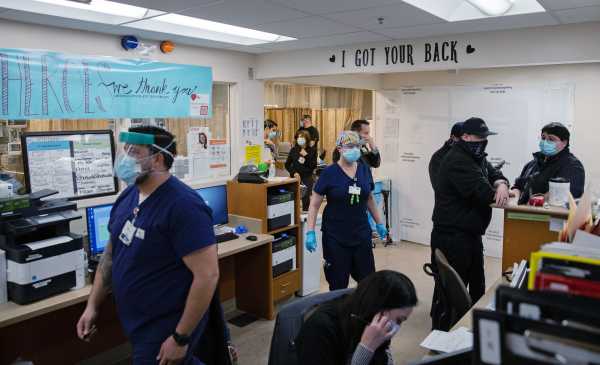 In Lutcher, Louisiana, home to St. James Parish Hospital, CEO Mary Ellen Pratt still has to repair her building after Hurricane Ida, which hit the hospital in late August 2021 — amid its fourth surge of Covid-19, driven by the delta variant. The hospital was supposed to launch a new electronic health record system that week, something they had put off in the spring of 2020, and instead lost internet connectivity for 14 days.

It’s an executive’s job to create “a vision and direction for the future,” Pratt said. But the pandemic made that impossible.

“During Covid, almost all CEOs were focused on operations, dealing with what was right smack in front of their face,” she said. “It wasn’t until January 2022 that I was seeing down the road again.”

By then, a plot of land purchased by the hospital had been sitting unused for two years. Pratt is planning to build a modernized primary care health clinic with other community services, such as an exercise center and a kitchen for healthy cooking classes. That work is finally getting started after the long delay.

But any progress can feel fleeting. These hospitals now operate in a state of permanent crisis. Federal and state relief is drying up, but the situation on the ground hasn’t actually improved much.

“I think we’re just living in the chaos,” said Julie Bieber, vice president at the Bellin Health Oconto Hospital, about 40 minutes north of Green Bay. “We know we’re going to have a lot of sick patients.”

At Oconto Hospital, patient beds were moved into rooms previously used for infusion treatments, to seclude non-Covid patients from people with the new virus — and they are still doing that, almost three years later. With RSV surging, their emergency and urgent care units are often operating at 100 percent capacity and patients have to wait up to six hours to be seen. When I spoke with Bieber, her hospital had 30 staff members and five doctors out with their own respiratory illness.

But they must keep the doors open. Short of a long drive to Green Bay, they are the only place where local residents can get hospital-level care. “In rural health, you don’t have back-ups to back-ups,” Bieber said.

She has her own list of put-off plans. The hospital had intended to start construction on a new clinic in Marinette, another 25 miles north along the bay, that would provide services of particular importance to cancer patients, such as ultrasounds and radiation therapy, so they would not need to travel as far to manage their illness.

But they postponed. “We didn’t have the energy,” Bieber said, and they didn’t know what the future would look like.

Bellin is preparing to start that project soon. But first, they may have to wait almost six months for door frames, an example of how the pandemic’s disruption of the global supply chain can put hospitals even further behind in unexpected ways. 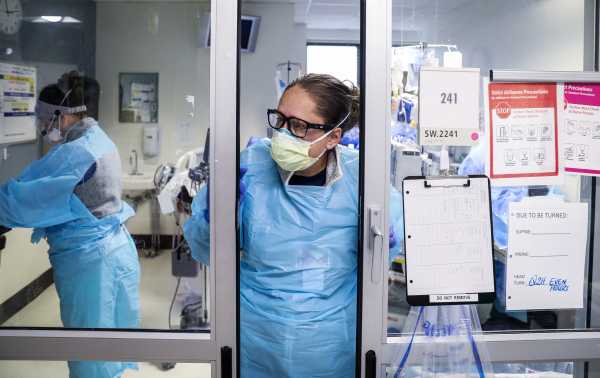 Across Wisconsin, there was a decline in health care facilities investing in new capital projects during Covid. According to statistics shared by the Wisconsin Health and Educational Facilities Authority, which funds such projects through bonds, there were 21 bonds issued for health care construction in fiscal year 2020 (which mostly comprised the pre-pandemic period). That number fell to three in fiscal year 2021 before rebounding partly to eight in the fiscal year 2022.

That kind of partial recovery was reflected in my conversations with Scoggin, Pratt, and Bieber, all of whom were preparing to get back to work on their long-term plans. But more delays could be in their future.

The winter viral season is already off to a rough start. Tim Size, who leads the Rural Health Wisconsin Cooperative, said the current trends could put hospitals “right back to where we were last winter.”

“That would be devastating for patients and the morale of our hospitals,” he said.

On the list of pandemic health consequences, both direct and indirect, hospitals’ delays in making capital improvements might not rank highly compared to, for example, long Covid or the delays in cancer diagnoses or the risks posed to the quality of care when a hospital’s staff is burnt out and overmatched. Not every hospital has been so adversely affected; as the Wall Street Journal recently reported, hospitals that serve wealthier communities took advantage of the government funding made available during Covid-19, to the detriment of needier facilities.

But in the communities that these critical access hospitals serve, the stakes are high, even existential. Scoggin has watched most of his peers in northeast Texas either close or end up bought out by a bigger hospital system. That brings its own problems. Titus prides itself on continuing to operate a labor and delivery department for its rural community. But, as I’ve reported this year, maternity care is often a target for cuts when a small hospital is eaten up by a bigger system.

Scoggin takes these risks personally, he said. “I don’t want to be the one who cost us having an independent hospital.”

There are clinical risks when patients have to travel farther to give birth. There are also risks when patients can’t easily see a doctor and get ahead of emerging health problems. Delays in diagnosing and treating chronic conditions like diabetes or other diseases like cancer lead to worse patient outcomes, according to the available research. 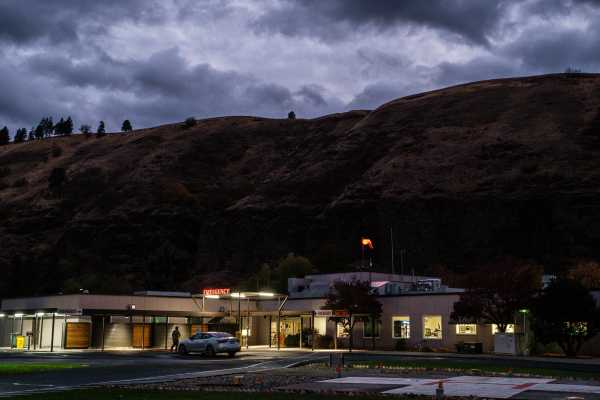 It is especially challenging for patients living in smaller communities, like the people in Mount Pleasant and Lutcher and Oconto, to receive medical care. In these places, the local hospital is often the one making new investments to expand health care access. But for the past three years, cascading from one crisis to another, they haven’t been able to do that.

“Without the ability to invest in our strategy, it is concerning for our future,” Scoggin said.

The consequences of those delays or aborted plans may not be obvious, but, based on what we know about the struggles of patients in these communities to access health care, any missed opportunities will leave people worse off.

Pratt described her vision for a new community health center in Lutcher as a place where not only could residents see a doctor, but they could take exercise and cooking classes. Where kids can attend after-school programs and stay out of trouble and seniors could play bingo — the kinds of engagement that can materially improve a person’s well-being. “That is wellness,” she said. “That’s health.”

Maybe in 2023, after these unforeseen and unpredictable delays, the vision can finally become a reality.