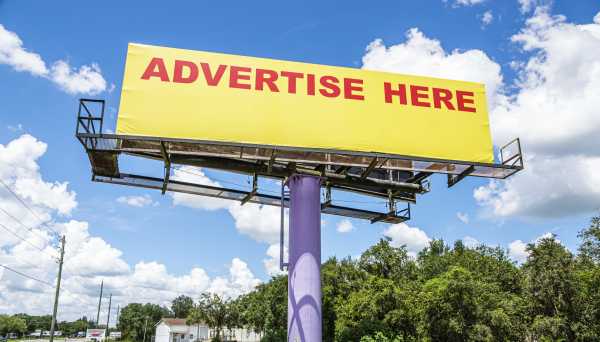 Not every truism is true, but there’s one for the ad industry that is pretty truthy: When the economy goes south, the ad market is the first thing to go.

The idea behind this one is pretty straightforward. If a company needs to cut costs, it’s much easier to get rid of ad budgets than anything else, like workers. So people in media have been trained to expect ad dollars to disappear in the wake of economic shocks. See, for instance, the Great Recession of 2008, when ad spending dropped by double digits in the following year. Or the spring of 2020, when ad dollars completely stopped for a few weeks while the world struggled to come to grips with the pandemic.

But now we’re seeing something different: For much of this year, in a variety of industries and media, the growth in ad spending has been slowing or stopping. You can see very obvious examples of this in public companies like Snap, which recently laid off 20 percent of its staff and blamed an ad market that had “substantially slowed.” Or you can ask someone who runs a privately held media company, off the record, how their business is going. “I’m glad I run a private company,” which doesn’t have to report its results in public, one of them told me this week.

But while the ad market is lurching, the general economy is … okay. Or, at least, mixed.

Yes, inflation is up, the stock market is down, and there are plenty of dire warnings about the future. On the other hand, the unemployment rate is pretty healthy, and even if consumers are spending less than they did at the height of the pandemic, they’re still spending.

What’s the reason for the disconnect, and what’s going to happen next? I’ve been asking people throughout the media and ad businesses. All of them agree that something unusual has manifested. None of them agree on the reason why.

So let’s run through some arguments:

Things are actually bad, even if the people around you can’t see that. And they’re going to get worse. So it’s better to stop spending now.

This theory both makes sense and is a little counterintuitive because it requires you to believe that people in charge of buying advertising are being proactive and not reactive.

But if you’re up for that: If your business involves selling expensive things that have become much more expensive because of inflation — like cars — or things that are much harder to make or get because of supply chain snarls — like phones and other consumer electronics — your business is already under pressure. You’re either having a hard time selling the stuff you have or you can’t get it in stock anyway. So why spend money advertising any of it now?

“They’re saying, ‘We can’t get enough product on the shelf, so why spend now to increase demand when we don’t have supply?’” a publisher told me this week, before adding, hopefully: “Maybe they’ll spend more in Q4.”

Blame Apple. Or TikTok. Or crypto. Or VCs.

This one is satisfying to lots of people in media, in part because they can blame Big Tech companies or Tech-Funded Exuberance or both. But the point is that it’s someone else’s fault.

If you want, you can blame Apple’s rewriting of digital ad tracking rules, which has made traditional digital advertising much more difficult and expensive, and which has really hurt Facebook’s and Snap’s ad businesses in particular. Another culprit could be TikTok, which is guilty of two different sins: On the one hand, it is taking ad money away from other digital outlets — in April, the company was projected to see its ad revenue jump to $12 billion in 2022, up from $4 billion last year. And it is also depressing the overall ad market because it has inspired two major competitors — Facebook and YouTube — to create TikTok clones that have lots of engagement but minimal ads, for now.

You can also simply point to the bursting of the most recent tech bubble: The crypto moment is over, for now, so the torrent of ads for the likes of OpenSea and Crypto.com has slowed to a trickle. Ditto for the slew of venture capital-backed startups that were told to grow as fast as possible and not to worry about “runway” — money to run their companies — because they could always raise more when they needed. Now the VC funding market has seized up, cash is king, and companies that figured they could market their way to success are looking for other ways to survive.

This one involves blaming the media business, at least in part, so it’s much less popular among people I’ve talked to. But it’s definitely worth thinking about: The way people buy ads, and the kind of ads they buy, has changed over the last decade-plus. And that makes the ad business much more susceptible to quick reversals.

In the old days, advertising was often bought well in advance of when it would run. The TV industry, for instance, built an entire calendar around pre-sales of ads: the spring “upfronts,” where TV networks show off programming they planned to run over the next year and try to convince media buyers to lock in a year’s worth of ad buys.

But now the majority of ad spending has moved to digital, where big platforms and smaller players have emphasized the ease of buying inventory whenever a buyer wants it — which also gives buyers plenty of chances to not buy ads.

Publishers used to expect that at least half of their revenue would come from annual media buys, but that number has been decreasing steadily for years, former Complex Networks CEO Rich Antoniello told me. “Now you buy it quarterly or monthly. And you buy Facebook and Google campaign by campaign” — which can run for even shorter periods.

That flexibility worked great for publishers when things were going great — like the last couple years, when everyone bought everything online and had extra money to fund those purchases. Now we see the downside.

“I’ve been talking about it more as a normalization,” says Kate Scott-Dawkins, the global director of business intelligence for GroupM, a giant ad buyer. She provided a helpful chart, which tracks revenue and advertising spend for digital companies, to explain her argument: It just looks like a bust because it follows a wild boom: 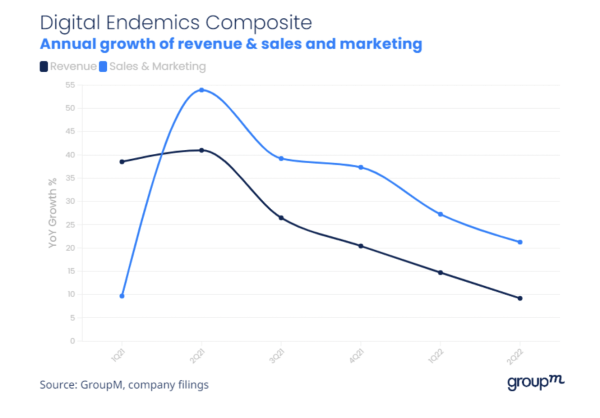 So yes, a chart that points down and to the right constitutes optimism in the media business today. But that also tells you how historically odd the past two years have been.

Again, I don’t know which of these arguments is correct, though I expect the eventual and unsatisfying answer will be “all of the above,” at least a bit.

Regardless, it will have the same impact: Fewer ad dollars to media outlets means less revenue, which means they’ll either have to make cuts on people and products — the stuff you watch, listen to, and read every day — or ask users to pick up the slack by paying for more of it out of their own pockets.