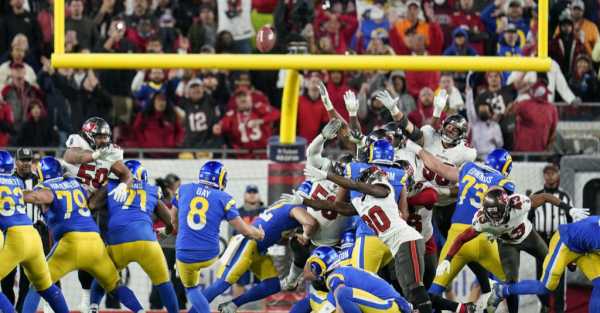 Matt Gay kicked the winning field goal as time expired to help the Los Angeles Rams hold off a trademark Tom Brady comeback and reach the NFC Championship game with a 30-27 win over the Tampa Bay Buccaneers.

Brady had inspired the defending Super Bowl champions to recover from 27-3 down to tie the scores with 42 seconds remaining at Raymond James Stadium.

However, with overtime looming Rams quarterback Matthew Stafford connected with Cooper Kupp on two receptions for 20 and 44 yards respectively before racing to the line of scrimmage to spike the ball.

That stopped the clock with four seconds left and Gay held his nerve to make the 30-yard field goal and set up a home tie with the San Francisco 49ers.

Such an exciting finale had looked highly unlikely as the Rams eased into a commanding lead, Stafford finding tight end Kendall Blanton for an early touchdown and then connecting with Kupp for a 70-yard score.

Stafford then scored himself with a quarterback sneak from the one-yard line before Kupp’s fumble gave the Bucs a lifeline and Leonard Fournette barged over for a much-needed touchdown.

The Rams were in danger of imploding and handed the ball back to their opponents when it was snapped before Stafford was ready, Brady soon punishing the error with a 55-yard touchdown pass to Mike Evans.

Fournette’s second rushing touchdown then levelled the scores before Stafford’s late heroics made it three wins out of three for the away team this weekend.

Meanwhile, Patrick Mahomes and the San Francisco 49ers eclipsed the Buffalo Bills 42-36 in overtime to punch their ticket to a fourth straight AFC Championship game.

In a frantic finish, both sides combined for three touchdowns and a last-second field goal in the final two minutes before Mahomes connected with Travis Kelce in the end zone on the first series of the extra period to seal the Chiefs’ victory.