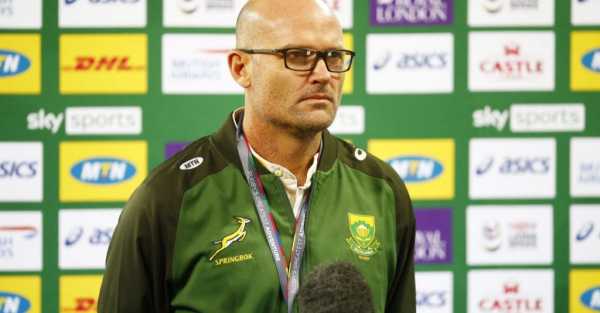 South Africa head coach Jacques Nienaber insists Rassie Erasmus’s latest ban will not affect Saturday’s game against England and that “all the facts” have not been made public.

Director of rugby Erasmus has been given a two-game matchday ban by World Rugby in response to a series of social media posts.

The sanction, which prevented Erasmus from taking part in the win over Italy and this weekend’s clash with England, includes engagement with media and social media in relation to match officials and comes a year after he missed the defeat at Twickenham for similar reasons.

World Rugby acted after Erasmus published a series of sarcastic tweets during the Autumn Nations Series, airing his grievances over officiating on social media rather than through the established channels.

Asked if the ban had affected the Sprinboks’ mood or preparations for the England game, Nienaber told a press conference: “In terms of Rassie’s ban, no, from our side we focus on rugby.

“We’re a tight-knit unit and team, everyone knows what’s going on, we’re open and transparent to everybody.

“Sometimes it’s, I don’t want to say disappointing, what would the right word be? Maybe disappointing is the right word, when there’s only certain facts that go out and then people from the outside, who only have those facts available, form an opinion and give an opinion on something that happened and obviously they don’t know all the facts.

“It is quite sad if you think about it. I think if all the facts are out there that people will probably form a different opinion.

“I’m not pointing figures at anybody, I don’t want to get involved in this, but for us as a group we know about everything, we’re transparent, we share everything with the players and we know all the facts and unfortunately things went that way, but for us the main thing is to focus on rugby and make sure we prepare our players mentally to be ready for a big test against England on Saturday.”

Pressed on what facts were missing, Nienaber added: “I think it probably will come out.

“There’s a lot of confidentiality that we’re not allowed to talk about with media. It’s stuff we can’t discuss but we know the facts, we share with the players and everyone within the group.

“We can’t control narratives of other people’s opinion about us. Whatever people think about us, they think about us but we know what happens inside and how we are.”

Nienaber has made six changes to his starting XV following the comprehensive win over Italy, with Jesse Kriel, Makazole Mapimpi, Evan Roos and Eben Etzebeth returning to the side.

Damian de Allende also moves from outside centre to inside centre, with Kurt-Lee Arendse switching from the left wing to the right.

With the match falling outside the international Test window, Cheslin Kolbe, Andre Esterhuizen, Cobus Reinach, Jasper Wiese and Vincent Koch have all returned to their clubs.

“We knew we would have to make changes to the team, but we are pleased with the depth we have built in the wider squad in the last few months, and it is paying off for us this week,” Nienaber said.