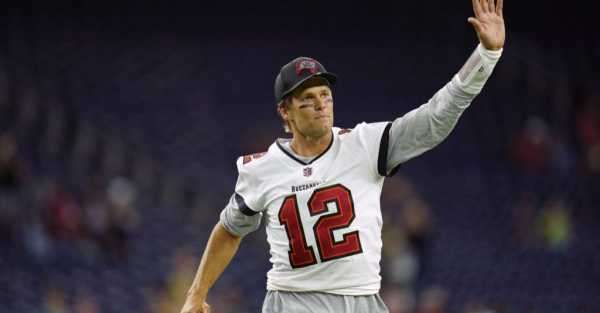 The 44-year-old won six Super Bowls during his success-laden spell with the New England Patriots, before adding a record seventh in his first season with the Bucs.

It was reported in the week following Tampa Bay’s narrow loss to the Los Angeles Rams in the NFL Divisional round that Brady intended to call time on his record-breaking career.

The future Hall of Fame quarterback has now confirmed his 22nd NFL season was his last in a lengthy statement posted on social media.

“I have always believed the sport of football is an ‘all-in’ proposition – if a 100 per cent competitive commitment isn’t there, you won’t succeed, and success is what I love so much about our game,” Brady said.

“There is a physical, mental, and emotional challenge EVERY single day that has allowed me to maximize my highest potential.

“And I have tried my very best these past 22 years. There are no shortcuts to success on the field or in life.

“This is difficult for me to write, but here it goes: I am not going to make that competitive commitment anymore.

“I have loved my NFL career, and now it is time to focus my time and energy on other things that require my attention.

“I’ve done a lot of reflecting the past week and have asked myself difficult questions. And I am so proud of what we have achieved.

“My teammates, coaches, fellow competitors, and fans deserve 100 per cent of me, but right now, it’s best I leave the field of play to the next generation of dedicated and committed athletes.”

Brady thanked his Bucs team-mates, general manager Jason Licht and head coach Bruce Arians in his retirement announcement, as well as the rest of the coaching set-up, staff, supporters and the Glazer family ownership.

There was no mention of the Patriots in his statement, although there was thanks for the likes of his trainer Alex Guerrero, agents Don Yee and Steve Dubin, parents and wider family.

Brady wrote: “And lastly to my wife, Gisele, and my children Jack, Benny and Vivi. You are my inspiration.

“Our family is my greatest achievement. I always came off the field and home to the most loving and supportive wife who has done EVERYTHING for our family to allow me to focus on my career.

“Her selflessness allowed me to reach new heights professionally, and I am beyond words what you mean to me and our family.”

Few would argue that Brady is not the greatest NFL player of all time – something that looked fanciful when selected in the sixth round of the 2000 NFL Draft, the 199th overall pick.

Brady retires as a seven-time Super Bowl champion with countless individual awards, with his playing career making way for the unknown.

“My playing career has been such a thrilling ride, and far beyond my imagination, and full of ups and downs,” the 44-year-old added.

“When you’re in it every day, you really don’t think about any kind of ending. As I sit here now, however, I think of all the great players and coaches I was privileged to play with and against – the competition was fierce and deep, JUST HOW WE LIKE IT.

“But the friendships and relationships are just as fierce and deep. I will remember and cherish these memories and re-visit them often. I feel like the luckiest person in the world.

“The future is exciting. I’m fortunate to have co-founded incredible companies like @autograph.io, @bradybrand, @tb12sports that I am excited to continue to help build and grow, but exactly what my days will look like will be a work-in-progress.

“As I said earlier, I am going to take it day by day. I know for sure I want to spend a lot of time giving to others and trying to enrich other people’s lives, just as so many have done for me.”