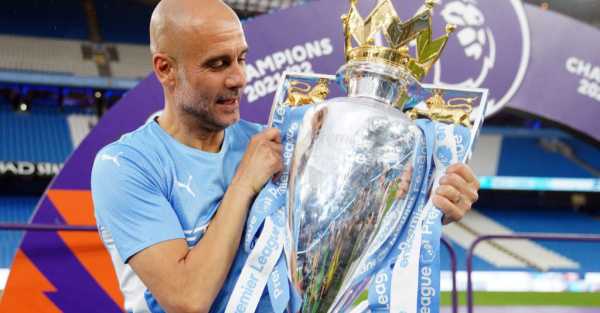 Pep Guardiola has no doubt Manchester City will remain a force after he leaves the club.

The City manager has given no indication that will be any time soon, even though speculation over his future is likely to recur until he commits to a new contract.

The 51-year-old former Barcelona and Bayern Munich boss is in the final year of his current deal at the Etihad Stadium.

There is no alarm about the situation at the club as Guardiola prefers shorter-term contracts and both of his previous two extensions have been signed at late stages.

Yet the time will come when the current champions will need to replace the man who has guided them to nine major trophies, including four Premier League titles, since 2016.

“The club knows exactly what is the target, the next step,” said Guardiola when asked about how City’s future might look without him. “There will be zero problem, I am 100 per cent convinced.

“They know what is the strategy, what they have to do for right now, the day after tomorrow, after the World Cup, next season, and the next season.

“When the club depends on one person we have problems, as the club is not solid, isn’t stable.

“The foundations of the club come from many and if the club just depends on Pep it is because we have not done really well in this period.

“If the club was just for one player, for the typical striker scoring a goal, they would not be a good team.

“I never buy a player, I never sell a player. It’s not my money. It is the club. ‘Club’ is the most important word and every decision we make is thinking about the club – today, the day after and for the future.

“The club knows knows the drill really well, the type of players that we want to play with me and without me.”

City face rivals Manchester United on Sunday and Guardiola will come up against former colleague Erik ten Hag for the first time.

Ten Hag, who coached the Bayern second team during Guardiola’s time at the German club, is United’s fourth full-time manager since the Spaniard arrived in Manchester.

“I have a lot of admiration for Erik,” said Guardiola. “We know each other a little bit because we were one year (together) in Munich.

“His work in Holland, especially in Ajax in the last period, was an incredible example across Europe.

“But he knows, I know, everybody knows, it will depend on the results. I’m still here because we won in the past, otherwise I would not be here.

“Results give you time to build what you want but I have a good opinion about United. If they decide to buy Erik it is because they believe he is the man.”