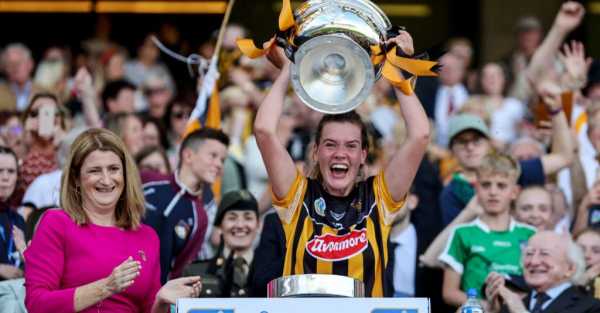 Kilkenny have claimed their 15th All-Ireland senior camogie title at Croke Park today, and their third since 2016 after an epic battle with Cork. In perfect conditions before a crowd of 23,426 this rip-roaring contest went right down to the wire.

As the Irish Examiner reports, overall the sides were tied seven times, but in the end, the winning point fell to Denise Gaule who converted from a placed ball in the 62nd minute.

There was one change to the Cork starting team with Newcestown’s Ciara O’Sullivan replacing attacker Cliona Healy but lining out at centre-back.

The opening 30 minutes was the classic game of two quarters with Laura Treacy and Claire Phelan acting as sweepers.

Brian Dowling’s side started like a train, their momentum unstoppable as they fired the first six points without reply. It was corner-back Tiffanie Fitzgerald who got the Cats up and running after a mere 14 seconds.

Hawkeye was called upon to rule out a Sorcha McCartan point before the Leinster side fired over their second point from Katie Nolan. Miriam Walsh landed a brace from tight angles before a pair from Denise Gaule put them into a strong lead on the 15 minute mark.

Grace Walsh produced a sensational interception on Katrina Mackey as she bore down on goal. However, it wasn’t long before Cork did find the net and it was Fiona Keating’s marvellous solo effort that settled her team in the 20th minute.

It served to ignite the Cork challenge – who opted to go with McCartan and Amy O’Connor as a two in the inside forward line – as they outscored Kilkenny four points to one – Amy O’Connor (2 frees), Keating and Mackey all finding the range to leave the sides delicately poised at the break, 1-4 to 0-7.

Cork took the lead for the first time five minutes into the second-half through an O’Connor free after Ashling Thompson was fouled, but it was quickly cancelled by Miriam Walsh at the other end.

Kilkenny were wasteful, and were relieved to see Katie Nolan convert a close-in free for the lead once more.

As the see-saw nature continued, Cork went into the ascendancy again through brilliant Keating and Mackey white flags.

What a cracking closing quarter was in store.

The game ebbed and flowed until Gaule’s late winner – the O’Duffy Cup heads back to Kilkenny.