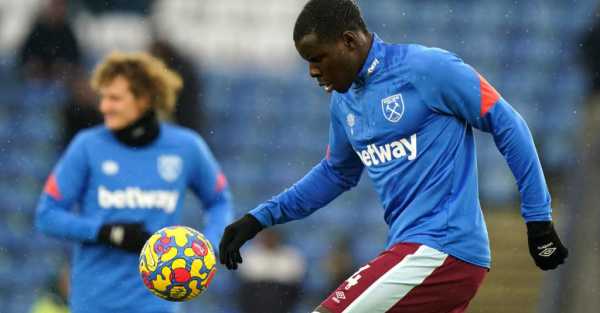 West Ham defender Kurt Zouma withdrew from the starting line-up for the Premier League game at Leicester on Sunday after complaining of feeling unwell.

Hammers boss David Moyes had included Zouma in his side again, despite the storm of protest surrounding the player following the abuse of his pet cat.

But the France centre-half headed for the tunnel during the warm-up after talking with Moyes and West Ham’s medical staff and the club announced Issa Diop had replaced him in the starting XI a short while later.

Zouma played the full 90 minutes in Tuesday’s home win against Watford just over 24 hours after a video showing him kicking and slapping his pet cat had circulated on social media, sparking widespread condemnation.

The 27-year-old Frenchman, who has been fined two weeks’ wages by West Ham, is the subject of an ongoing joint investigation by the RSPCA and Essex Police.

Zouma’s brother Yoan, who is understood to have taken the video, has been suspended by his club, Dagenham, until the RSPCA has completed its probe.

The RSPCA has confiscated Zouma’s two cats, while his personal kit supplier, Adidas, have cut ties with the player and Vitality has suspended its sponsorship as West Ham’s official wellness partner.

In a press conference on Friday Moyes pleaded for forgiveness for Zouma and told Sky Sports before kick-off at Leicester that “the club have dealt with things in the best way they possibly could”.

Moyes said: “I think they’ve done as much correct as they could. We’ve punished him as much as we could at this moment in time. After that, the law will take care of all the rest of it.”

But Graeme Souness was scathing in his criticism of both Zouma and West Ham.

Souness told Sky Sports: “It (the cat) was abused for entertainment. It was wrong on every level.”

He said West Ham had “mismanaged it from day one” and added: “For me I wouldn’t have played him again this year.

“If I was still a player I wouldn’t want to be in the dressing room with him, I would not want him around the place until he has shown real remorse in whatever way that shows itself.