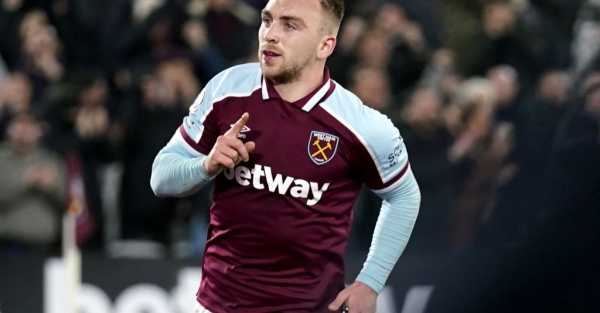 Jarrod Bowen insists West Ham have a strong enough squad to sustain a top-four challenge despite their failure to bring in January reinforcements.

Hammers boss David Moyes was left frustrated in his search for a centre-half and a striker when the transfer window closed on Monday night.

Drawing a blank in the market has left West Ham’s squad looking painfully thin, especially with a Europa League knockout campaign on the horizon.

But winger Bowen told the PA news agency: “I think if you look at the games we’ve had already, we’ve had 23 Premier League games, the Europa League, Carabao Cup games, the FA Cup as well.

“We’ve had a lot of games already and the squad has done more than enough right now, so now it’s about as a team pushing forward again over the second half of the season.”

It is now 389 days and three transfer windows since Moyes sold Sebastien Haller to Ajax, and a replacement has still yet to materialise.

Michail Antonio remains the club’s only recognised senior striker, but Bowen has filled in up front when the Jamaica international has been unavailable.

“I’ve played up front a few times now with different injuries and suspensions and I’ve enjoyed it up there,” he added.

“I like playing up there so if I’m needed to play up front I’ll play there.”

Bowen’s excellent form and nine goals this term have catapulted him into the conversation for an England call-up.

The 25-year-old was a deadline-day signing from Hull two years ago and is finally flourishing in the top flight.

Speaking on behalf of FOOTY.COM, Bowen said: “I just want to develop my game and be the best version of me.

“Last season was my first full season in the Premier League which was always going to be new to me.

“Then this season was about improving again and trying to do what I know I can do, what I’ve got in the locker so to speak, and being the best I can be.

“I’ve got a long way to go, and a lot more to come from my side, and I’m happy with how it’s going right now.

“It’s every boy’s dream to play for their national team and it’s one of my dreams. All I’m doing is playing my game to the ability that I know I can play at and I want to stick at.

“So if an England call-up happened I’d love it. It’s a long time to the international break so my focus now is pushing this team into the top four and if a call-up happens I’d be delighted.”

:: Jarrod Bowen was speaking on behalf of FOOTY.COM, an online platform which compares the cost of the world’s biggest sportswear brands and retailers, helping people save money on everything from football kits and boots, to clothing, trainers and equipment. Visit the FOOTY.COM website now for all the latest deals