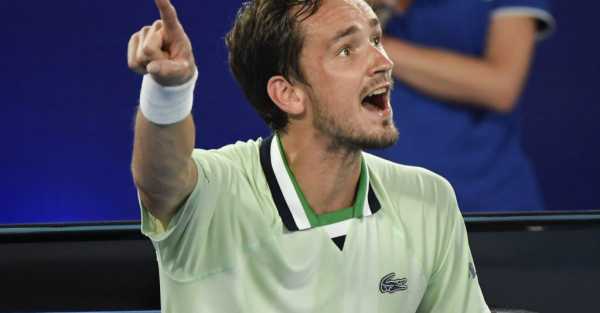 Daniil Medvedev expressed regret about his mid-match meltdown in his Australian Open semi-final victory over Stefanos Tsitsipas, admitting: “I just lost it.”

Medvedev’s 7-6 (5) 4-6 6-4 6-1 success means he will play for a second straight grand slam title after his maiden victory at the US Open last summer when he takes on Rafael Nadal on Sunday.

It is also the second year in a row he has made the final at Melbourne Park, having lost to Novak Djokovic 12 months ago.

But much of the attention will focus on Medvedev’s extraordinary rant at the umpire late in the second set, when he accused Tsitsipas of receiving coaching from his father Apostolos.

After double-faulting to drop serve and trail 5-4 and being given a warning for a visible obscenity by umpire Jaume Campistol, Medvedev began to scream at the official.

“His father can talk every point,” yelled the Russian. “Are you stupid? I’m talking to you, look at me. How can you be so bad in the semi-final of a grand slam?”

After Tsitsipas clinched the set, Medvedev had more words with Campistol regarding his coaching complaints, ending by calling the official a “small cat”.

“I think we can say it was funny, but I was definitely out of my mind,” said Medvedev later.

“I was not controlling myself any more about anything, and that’s actually why I’m really happy to win, because many matches like this I would go on just to do mistakes, because you lose your concentration a lot when you get in these heat-of-the-moment things.

“The next game, 15-40, I started terrible. I was like, ‘Oh, my God, I’m just completely losing the fibre of this match’. I’m so happy that I managed to catch it really fast.”

The list of matches in which Medvedev has lost his cool is a long one, and the 25-year-old insisted it is something he is trying to improve.

“I regret it all the time because I don’t think it’s nice,” he said. “I know that every referee is trying to do their best.

“But tennis, we don’t fight with the fists, but tennis is a fight. It’s a one-on-one against another player. So I’m actually really respectful to players who almost never show their emotions because it’s tough. I can get really emotional. I have been working on it.

“So many, many matches, I handle it. I think if we look back at myself five years ago when I started playing, there was less attention on me, but I was just insanely crazy. So I do regret it 100 per cent but, in the heat of the moment, I just lost it.”

Tsitsipas Senior has been repeatedly warned for coaching, and was later in this match as well after a Greek-speaking official was positioned underneath his box.

His son insists he does not listen to any coaching advice during a match, but said: “My father, he’s a person that when he gets into something when there is a lot of action, his medicine is to talk, and you can’t stop it. It’s something that he does from nature.

“I’ve talked to him about it. I’ve tried, spent countless hours trying to figure it out with him, but it’s part of him.

“I’m pretty sure I’m going to keep receiving coaching violations, even though I will never listen to any single thing he says. But it’s fine, they can do that if they want, if they believe it’s right.”

An added dimension to the clash was that there is bad blood between Medvedev and Tsitsipas dating back to a fiery clash in Miami four years ago and exacerbated by their very different characters.

Asked about Medvedev’s rant, Tsitsipas could not supress a grin as he said: “It’s for sure funny. I don’t pay attention. I know players like to do this stuff to throw you off mentally. Could be maybe a tactic. It’s all right. He’s not the most mature person anyways.”

This was their ninth meeting and second in a row in the semi-finals here, with Medvedev winning comfortably 12 months ago after Tsitsipas’ big victory over Nadal.

The Greek came into the tournament with doubts over his fitness following elbow surgery, but he was in top form against Jannik Sinner in the quarter-finals, while Medvedev survived an almighty scrap against Felix Auger-Aliassime, recovering from two sets down and saving a match point.

There was almost nothing to choose between them in a high-quality first set, but it was Medvedev who came from 4-1 down to take the tie-break.

The crunch moments came in the third, first when Medvedev saved the two break points in the first game and then when he broke Tsitsipas in the final game before the Greek’s resistance ebbed away completely.