Manchester City didn’t have a holding midfielder, a late injury causing Rodri to join Kalvin Phillips on the sidelines. Their centre-backs, Nathan Ake and Manuel Akanji, had never played a Premier League game together. Right-back Kyle Walker had to be withdrawn with an injury in the first half.

In the end, though, none of it mattered.

All that matters for Manchester City right now is that Erling Haaland plays. Because when he does, he scores.

With his demolition of Manchester United at the Etihad Stadium, the Norwegian became the first player in Premier League history to score hat-tricks in three consecutive home games. 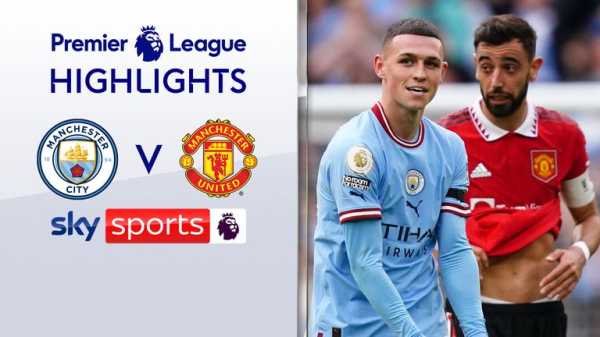 The numbers are extraordinary.

In the first eight Premier League games of the season, he has scored more goals than 14 teams, his total of 14 twice as high as any other player. Harry Kane is averaging roughly a goal a game for Spurs and yet he is fading from view in Haaland’s wing mirrors.

With 30 games of the campaign still to play, Haaland only needs to score nine more goals to match the tally that clinched Mohamed Salah and Heung-Min Son the Golden Boot last year.

At his current rate, he will do it before the end of October. Salah’s 32-goal Premier League record will fall in early January – and that’s with a six-week break for the World Cup factored in. By the end of the season, he will have scored 71.

Of course, it would be fanciful in the extreme to expect him to continue quite like this until then but what is already clear is that he is moving the boundaries around what is possible in this division. 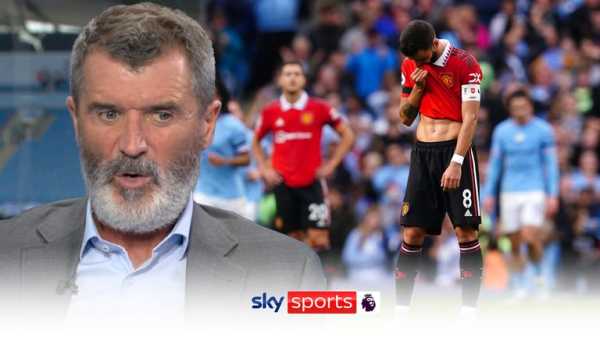 Manchester United simply had no answer on Sunday and, as against Crystal Palace and Nottingham Forest before them, Haaland administered most of the damage in a short but devastating spell.

His first goal, a bullet header from Kevin De Bruyne’s corner which flew over the line before Tyrell Malacia could hook it clear, arrived on 34 minutes. His second came just three minutes later.

“I think that is what they now have with him, an ability to take games away from the opposition in a short period of time,” said Gary Neville on co-commentary. “The word is devastating, it really is.” 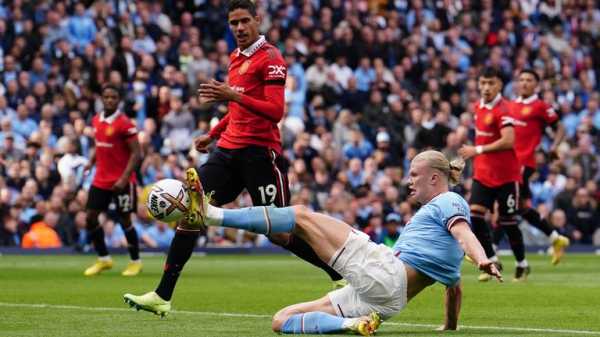 Image: Erling Haaland makes it 3-0 to Man City with his second goal

His second was once again created by De Bruyne, who has now set up four goals for him in the Premier League this season. The cross was sensational, but so was the finish, dispatched on the slide at the far post to send the Etihad into raptures.

The hat-trick goal was classic Haaland too, a powerful finish from the centre of the penalty area once again dispatched first-time. He is averaging a goal every 14 touches and a shot every six. Thirty-one per cent of his total touches have come in the opposition box.

It is a level of ruthlessness which has never been seen in the Premier League. “You watch him and you think, ‘What the hell is that? It’s a freak,'” added Neville. “There are very few players like this.”

In fact, there aren’t any. The devastation wrought by his speed and movement could be seen throughout at the Etihad Stadium – “once he makes the run, he’s almost unplayable,” added Neville as he raced onto a Bernardo Silva through-ball in the second half – but it is inside the width of the goalposts that he truly comes alive. 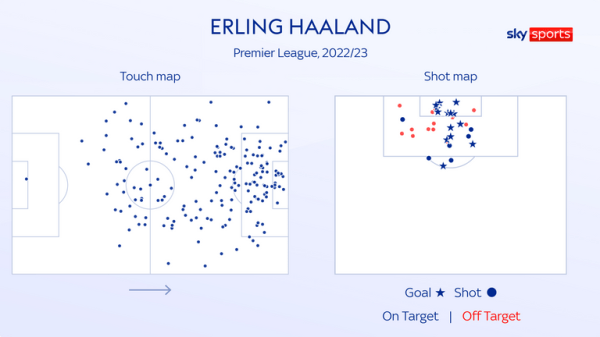 All 14 of his Premier League goals have come from there. More than half of them, including the header for his first on Sunday, have come from inside the six-yard box.

A predatory presence in that area is the one thing City could be accused of lacking last season but what makes Haaland even more scary for their opponents is that he is contributing in other ways too. His efficiency can be seen in practically every action.

Against United, as well as scoring three goals, he set up two of Phil Foden’s, his perfectly-weighted pass allowing his team-mate to add City’s fourth moments before half-time. He then produced another pass in behind United’s beleaguered defence for the sixth. 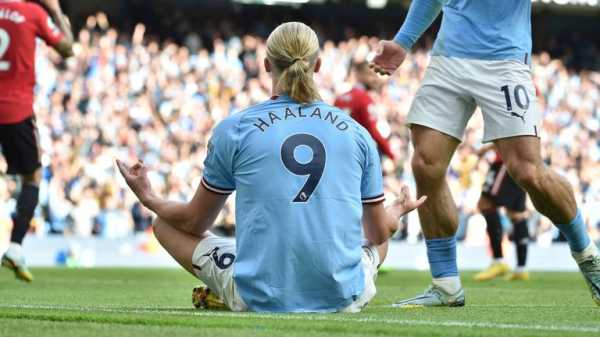 So, as well as the 14 goals, Haaland now has three assists, a total which puts him behind only De Bruyne, Bernardo Silva and Arsenal’s Bukayo Saka across the whole of the Premier League.

If there is some way of stopping him, then Premier League sides are yet to figure it out. Manchester United are just his latest victim. Expect Haaland to subject City’s next opponents, Southampton, Liverpool and Brighton, to something similar.