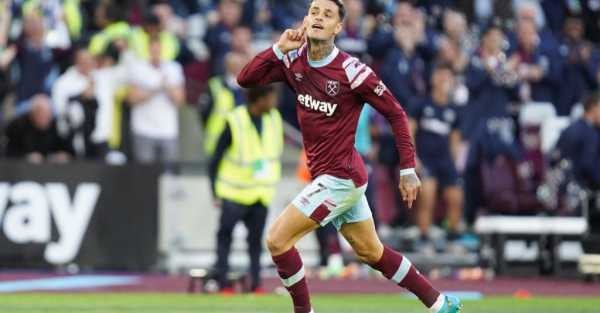 Declan Rice has backed Gianluca Scamacca to add to his growing catalogue of spectacular goals for West Ham.

Italian striker Scamacca struck a superb half-volley from 20 yards to give the Hammers the lead against Wolves on Saturday evening with his first Premier League goal.

Yet Scamacca’s crackers have come as no surprise to Hammers captain Rice.

“He has probably scored about 20 worldies since he’s been here, and I’ve just gone ‘wow; he can hit a ball’,” Rice told the club’s website.

“When he gets the space, he can really deliver for us. So, I am buzzing that he scored. But his all-around contribution, he really linked the game well and he looks to be a real positive threat for us.

“Gianluca has got one of the best strikes of a ball I have ever seen. It’s crazy. When it went into the top corner there was no surprise at all.”

Jarrod Bowen’s second-half strike, also his first goal in the Premier League this season, wrapped up a 2-0 win for the Hammers and moved them out of the bottom three, at the expense of Wolves.

The pressure is growing on boss Bruno Lage but captain Ruben Neves says the players need to take responsibility.

“We have all the information possible before the matches, so it’s about us, it’s not about anyone else,” he told Wolves’ website.

“Of course, we struggled a little bit in the beginning, a lot of new players, a lot of players going out, but no more excuses now.