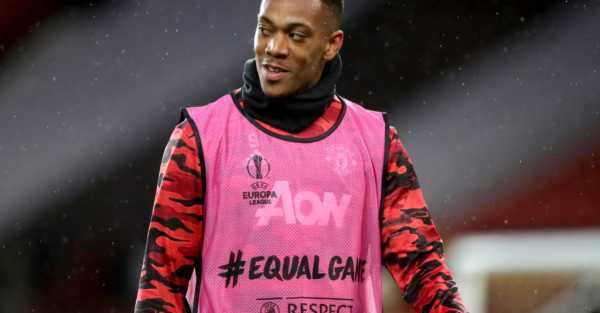 Anthony Martial is ready to play anywhere for Sevilla after completing a loan move from Manchester United for the remainder of the season.

France international Martial joined United in a £36million move from Monaco in 2015 but had found himself down the pecking order at Old Trafford and been heavily linked with a move away.

Sevilla, currently second in LaLiga, have agreed to cover Martial’s wages as part of the deal, but the PA news agency understands there is no option to buy included.

The 26-year-old was at the centre of controversy earlier this month when interim United manager Ralf Rangnick claimed he had refused to play in the 2-2 draw at Aston Villa in the Premier League.

Martial – who has made 269 appearances for United, scoring 79 goals – denied that, insisting he “never disrespected and never will disrespect the club and the fans”.

The France international then came off the bench in Saturday’s 1-0 win over West Ham, where he played a part in Marcus Rashford’s late winner.

At a press conference at the Ramon Sanchez-Pizjuan Stadium on Wednesday, Martial maintained he was now only focussed on getting regular game time with Sevilla.

“I’m ready to play. I trained hard to be ready and if the coach wants me to play, I’ll do it now,” Martial said.

“What convinced me to come is the contact with the sporting director and the coach, they showed me that they wanted me.

“I wanted to come so I could play and show what I can do in the team.

“In the last few months I have been training a lot. I hope to be able to train soon with my (Sevilla) team-mates and work well with them to fight for the competitions we’re still in.”

Martial added in quotes on the club’s website: “I’ve spoken with the coach, but the most important thing for me is playing, it doesn’t matter where, so I can do my best and do what the manager wants from me.

“This is a good team, they play football. I want to bring my experience here and help the team to keep winning.

“We are well-placed in second place and there are other big clubs that are aiming for the same as us. We have to be consistent and fight as much as we can to achieve it.”

Sevilla resume the LaLiga campaign at Osasuna on February 5 when they will look to try to close the four-point gap on leaders Real Madrid.

“My aim is to play, help the team and that means enjoying myself on the pitch and scoring and assisting,” he said. “That’s the aim for me these next few months.”