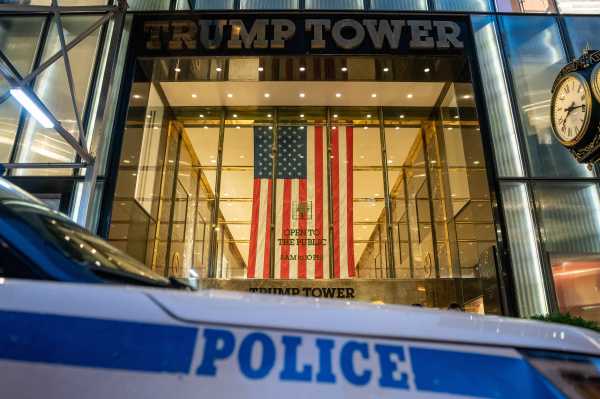 On Monday, FBI agents executed a search warrant at Mar-a-Lago, former President Donald Trump’s Florida home. Trump confirmed in a statement published online that his residence was “occupied by a large group of FBI agents,” although Trump himself was reportedly in New York when the search warrant was executed.

Little is known about the raid — or what, if any further steps the Department of Justice might take — but even this moment is politically and historically significant. There are constitutional rules regarding what law enforcement must do to justify searching private property, and the Justice Department has institutional norms on top of those about treatment of political figures that could influence elections. It’s unlikely the decision to search Mar-a-Lago was taken lightly.

It’s not yet clear what specifically these agents were looking for during the raid, but CNN reports a few details about it. Among other things, the search “included examining where documents were kept” in Trump’s personal residence and office, and “boxes of items were taken.” Currently, the Justice Department is conducting two known investigations into Trump: one on his efforts to overturn the 2020 election and on the ensuing January 6 attack on the US Capitol, and the other regarding Trump’s alleged mishandling of classified documents.

According to the New York Times, the search focused on material Trump brought from the White House to Mar-a-Lago after he left office — material that included classified documents and other documents subject to the Presidential Records Act, which requires official presidential documents to be turned over to the National Archives at the end of a presidency. Trump’s son Eric told Fox News something similar on Monday night.

Beyond this reporting, however, little is known about the raid, how it ties into the broader investigations into Trump, whether federal charges are imminent or even if they will be forthcoming, and whether those charges would ultimately be filed against Trump. Even the White House reportedly says it’s in the dark — President Joe Biden’s inner circle reportedly learned about the raid from Twitter around the same time that the rest of the nation did.

Trump’s fellow Republicans, meanwhile, responded to the raid with intimidation. House Minority Leader Kevin McCarthy (R-CA) promised to “conduct immediate oversight” of the Justice Department if his party takes control of the House, and instructed Attorney General Merrick Garland to “preserve your documents and clear your calendar.” Other Republicans responded with more unhinged — and even transparently unconstitutional — threats.

So, while we do not know yet how this investigation will play out, or if anyone in Trump’s orbit will even face criminal charges, the stakes are obviously quite high. A former president could face a criminal trial, and Republicans are already signaling that they will retaliate against Democrats and law enforcement if they regain power in Washington.

Just how much evidence does the FBI have against Trump?

Trump’s statement confirming that the search occurred is written with typical Trumpian bluster. He claims that such a raid can only happen in “broken, Third-World Countries,” and asks “what is the difference between this and Watergate?”

To answer Trump’s question, the difference between this FBI raid and Watergate is that the Watergate break-in was an illegal burglary committed by five individuals tied to then-President Richard Nixon’s reelection campaign. When the FBI obtains and executes a search warrant, by contrast, it must comply with a laundry list of requirements laid out in the Constitution itself.

The Fourth Amendment provides that no search warrant may issue except “upon probable cause, supported by oath or affirmation, and particularly describing the place to be searched, and the persons or things to be seized.” According to Black’s Law Dictionary, “probable cause” exists when law enforcement has “a reasonable ground to suspect that . . . a place contains specific items connected with a crime.”

Although law enforcement may obtain a search warrant based on “less than evidence that would justify a conviction,” the probable cause requirement means that federal agents may not simply search a home based on a hunch, a vendetta, or a quizzical plan to boost Nixon’s 1972 presidential campaign.

Because the Fourth Amendment requires federal agents to describe both the place they intend to search and the “persons or things to be seized” before a warrant may issue, the FBI agents who searched Trump’s home would have needed to have a fairly good idea what they were looking for, and they would have needed probable cause to believe that they would find it within Mar-a-Lago.

Additionally, they would need to seek such a warrant from a federal magistrate judge — thus ensuring that a judicial officer who, at least in theory, is neutral and impartial would decide whether the warrant should issue.

It’s worth noting, moreover, that probable cause is the bare minimum to obtain a search warrant under the Constitution. As I’ll explain in more detail below, the Justice Department’s rules and norms counsel extraordinary caution when investigating “politically sensitive individuals and entities,” and DOJ also must have known that an FBI raid targeting the GOP’s most prominent figure would trigger threats of retaliation from Republican officials. Given these sensitivities, it is unlikely that the FBI would have moved forward with this raid unless it was very confident that it would find evidence of a crime in Mar-a-Lago.

What charges could Trump face?

Again, we do not yet know what specific evidence FBI agents sought during the raid, whether they turned up any such evidence, or which specific statutes they believe Trump or someone in his orbit may have violated.

If the reports that this raid focused on Trump’s alleged mishandling of classified information are accurate, however, Trump may have violated a federal law that applies to anyone who “willfully and unlawfully conceals, removes, mutilates, obliterates, or destroys, or attempts to do so, or, with intent to do so takes and carries away” certain federal documents. If Trump is convicted under this statute, he may be fined and imprisoned for up to three years.

Trump may also be charged with violating other criminal statutes because of his efforts to overturn the 2020 election and his alleged incitement of the January 6 attack — although, again, it is unclear whether this FBI raid sought evidence that he violated those statutes. Last March, for example, a federal judge determined that Trump most likely violated statutes making it a crime to obstruct Congress’s official business or to conspire to defraud the United States.

The former statute carries a maximum penalty of up to 20 years in prison, while the later has a maximum sentence of five years.

Could Trump run for president again if he is charged or even possibly convicted?

As a general rule, someone charged with a crime or even someone convicted of most crimes may run for federal office. On Twitter, however, Democratic election lawyer Marc Elias noted that the statute governing mishandling of federal documents carries an additional penalty — someone who violates it can be “disqualified from holding any office under the United States.”

The closest thing to a Supreme Court case on this point is Powell v. McCormack (1969), which involved the House’s refusal to seat Rep. Adam Clayton Powell (D-NY) due to allegations that Powell “had deceived the House authorities as to travel expenses” and made illegal payments to his wife while he chaired a congressional committee.

The Court, however, ruled that Congress had only limited power to exclude a duly elected member that it deems ineligible for office.

The Constitution lays out certain minimum qualifications for a member of the House — they must “have attained to the age of twenty five years, and been seven years a citizen of the United States,” and they must “be an inhabitant of that state in which he shall be chosen.” Under Powell, a Congress that wishes to exclude a member “is limited to the standing qualifications prescribed in the Constitution” — that is, they can only exclude a member who is deemed to be too young, not an inhabitant of their state, or a too recently naturalized citizen.

Although Powell concerned members of the House and not presidents, its logic could also apply to the presidency. The Constitution also lists the minimum qualifications of a president — they must be a “natural born citizen;” they must “have attained to the age of thirty five years;” and they must have been a US resident for 14 years (they also must not have been disqualified through an impeachment proceeding).

If a court deemed Trump ineligible for the presidency because he violated a federal statute, Trump would have a strong legal argument under Powell that he nonetheless remained eligible — although it would ultimately be up to the Supreme Court to decide if Powell’s reasoning applies to the presidency.

Last May, Attorney General Garland issued a memorandum to all DOJ personnel, warning them that “law enforcement officers and prosecutors may never select the timing of public statements (attributed or not), investigative steps, criminal charges, or any other action in any matter or case for the purpose of affecting any election,” nor should they take any action that may create “the appearance of such a purpose.”

DOJ, in other words, has for a long time been hyper-cautious about taking any action that could change the result of an election or even appear to be intended to — which is why then-FBI Director James Comey’s decision to repeatedly disparage Democratic President candidate Hillary Clinton in 2016 was such a betrayal of the Justice Department and of the United States of America. As former deputy attorneys general Jamie Gorelick and Larry Thompson explained in a 2016 op-ed, DOJ even has a rule that “in the 60-day period before an election, the balance should be struck against even returning indictments involving individuals running for office, as well as against the

An August raid against a former president in a midterm election year is not the kind of unforgivable betrayal that Comey committed in 2016 — among other things, Trump is not currently a candidate for elected office — but it is very serious business. Such a raid obviously could influence voters who are trying to decide whether to vote for a party very much still tied to Trump in November.

And the raid also brings other very serious risks. As Minority Leader McCarthy’s statement reveals, Republicans are likely to turn much of their resources — including its allied media organizations and propaganda outlets — towards the task of discrediting the Justice Department and the FBI. A darker possibility is that, if Republicans regain control of the Justice Department, the increasingly authoritarian GOP could cite the FBI’s raid on Mar-a-Lago as a casus belli justifying using law enforcement to target prominent Democrats.

So, while we don’t yet know what evidence the Justice Department has against Trump, or what it hoped to accomplish with Monday’s raid, there can be little doubt that DOJ understood it took a tremendous risk when it greenlighted that raid. It is unlikely that it would have done so unless its highest officials were convinced that this raid would uncover evidence that would justify such a risk.