Supreme Court Chief Justice John Roberts on Monday temporarily stopped the expiration of the immigration restriction Title 42, which was scheduled to lift on Wednesday, after 19 states filed an appeal.

Roberts' brief order did not discuss the merits of the case. The administrative stay gives the justices enough time to consider the states' appeal by delaying the looming deadline for Title 42 to end.

In responses to the court, the federal government and the states challenging Title 42 made their arguments about why the justices should or shouldn't intervene.

"Rather than returning to the immigration system prescribed by Congress, applicants ask this Court to compel the government to continue relying on now-obsolete public-health orders as the Nation's de facto immigration policy. Applicants are not entitled to that relief," Elizabeth Prelogar, the solicitor general, wrote.

Migrant and advocate attorneys echoed that in their own response, writing: "Even if the States' speculative predictions of financial harm were credited, there is no legal basis to misuse a public health measure to displace the immigration laws long after any public health justification has lapsed. If changes need to be made to the immigration statutes, that choice 'is up to Congress.'"

The states, in their own filing, implored the Supreme Court to take up the case and keep the border policy in place effectively until next summer.

The states, led by the attorneys general for Arizona and Louisiana, Mark Brnovich and Jeff Landry, maintained that the respondents had essentially conceded the states "will suffer irreparable harm, as States 'bear[] many of the consequences of unlawful immigration.'

Earlier this week, the states asked the Supreme Court to keep Title 42 in place — contending that not doing so "will cause a crisis of unprecedented proportions at the border."

"Getting rid of Title 42 will recklessly and needlessly endanger more Americans and migrants by exacerbating the catastrophe that is occurring at our southern border," Arizona Attorney General Brnovich said in a statement on Monday. "Unlawful crossings are estimated to surge from 7,000 per day to as many as 18,000."

The policy known as Title 42 started in 2020, under President Donald Trump, in the early days of the COVID-19 pandemic and has since been used to expel migrants from the southern border more than 2.4 million times on the basis of public health concerns.

Due to the rapid nature of the expulsions, which usually take place in a matter of hours, access to asylum and other humanitarian protections is sharply curtailed.

The American Civil Liberties Union and other advocates have been waging a legal battle against the order, claiming it violates federal and international law.

In Monday's application for a stay, the states, which are mostly Republican-led, again argued that lifting Title 42 will create an influx of unauthorized migrants who will unduly burden government services like law enforcement, education and health care.

Border Patrol made a record 2.2 million apprehensions along the southern border this past fiscal year. Meanwhile, the Biden administration removed 1.4 million people under both Title 42 and the standard immigration authority, Title 8. 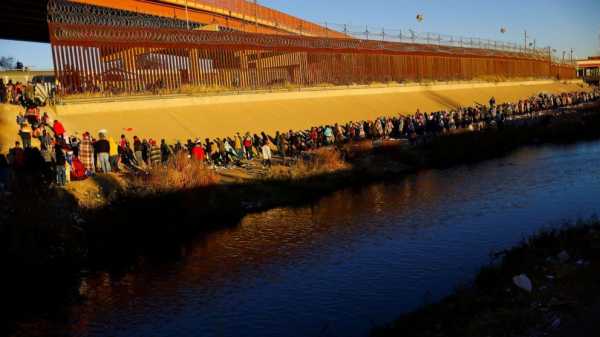 Migrants queue near the border wall after crossing the Rio Bravo river to turn themselves in to U.S. Border Patrol agents to request asylum in the U.S. city of El Paso, Texas, as seen from Ciudad Juarez, Mexico, on Dec. 14, 2022.Jose Luis Gonzalez/Reuters

The states also maintained that the federal government is essentially trying to have it both ways on the controversial policy — what the states call "collusion and contradiction" — because the government first defended Title 42 earlier in the litigation and then switched sides and supported the lower court decision to strike it down.

Last month, U.S. District Judge Emmet Sullivan ruled that Title 42 was "arbitrary and capricious" and that its public health impact was minimal.

MORE: Republicans talk of 'chaos' at the border without Title 42 but don't have better plan: Padilla

Sullivan set a Wednesday deadline to end the protocols.

A federal appeals court on Friday denied the states' effort to preserve Title 42.

The states sought a stay from Roberts, who oversees the appellate circuit handling the case, as well as for the full Supreme Court to hear their appeal while Title 42 remains in place. The justices could agree to hear the appeal by granting a writ of certiorari.

There is no set timeline for this and the court could act at any time.

The appellate ruling last week was unanimous — and procedural. The lower court judges found that the states became involved too late in the process, given their purported alarm.

"In this case, the inordinate and unexplained untimeliness of the States' motion to intervene on appeal weighs decisively against intervention," the panel wrote, noting that the lawsuit had been pending for almost two years. 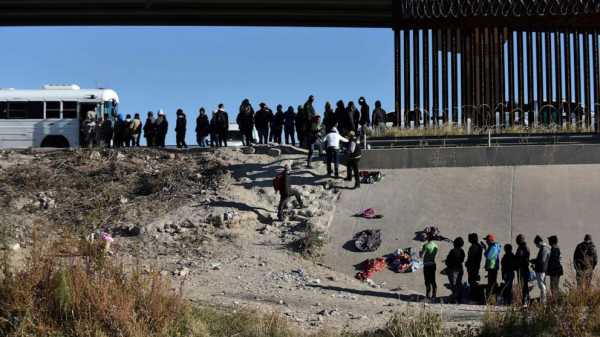 Migrants wait to get into a U.S. government bus after crossing the border from Ciudad Juarez, Mexico, to El Paso, Dec. 12, 2022.Christian Chavez/AP

White House press secretary Karine Jean-Pierre said Monday, ahead of the temporary stay, that the administration was still preparing to end the Title 42 protocols as ordered.

"What I can tell you is we are required by a court order to lift Title 42. That's Dec. 21. And we're going to comply with that," she said.

In a statement last week, after the appeals court ruled against the states, White House spokesman Abdullah Hasan said that the administration "will continue to fully enforce our immigration laws and work to expand legal pathways for migration while discouraging disorderly and unsafe migration."

"To be clear: the lifting of the Title 42 public health order does not mean the border is open," Hasan said then. "Anyone who suggests otherwise is doing the work of smugglers spreading misinformation to make a quick buck off of vulnerable migrants."

In a statement on Monday following the stay, the Department of Homeland Security said, in part: "The Title 42 public health order will remain in effect at this time and individuals who attempt to enter the United States unlawfully will continue to be expelled to Mexico.

"While this stage of the litigation proceeds, we will continue our preparations to manage the border in a safe, orderly, and humane way when the Title 42 public health order lifts."

The department urged Congress to approve more funding for the border.