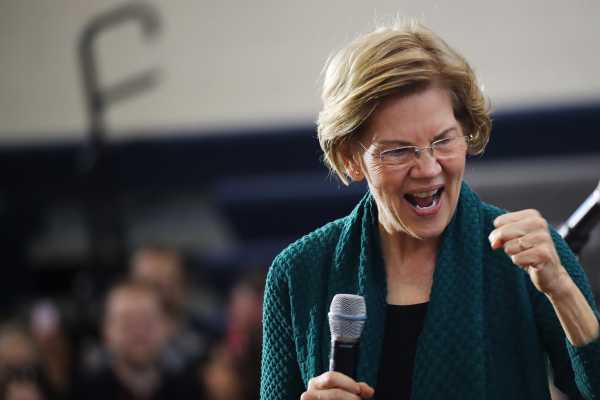 Sen. Elizabeth Warren has been endorsed by the Des Moines Register, one of the largest and most influential newspapers in Iowa.

The newspaper announced its coveted endorsement on Saturday, just over one week before the Iowa caucuses, after interviewing nine Democratic candidates. The endorsement was decided on by the paper’s editorial board, which said it was difficult to settle on a single person due to the “outstanding caliber” of the remaining candidates.

The board said it ultimately chose the Massachusetts senator because “she is tough and fearless” and because of her experience creating a government agency from the ground up.

“She is a thinker, a policy wonk and a hard worker,” the editorial board wrote. “She remembers her own family’s struggles to make ends meet and her own desperation as a working mother needing child care. She cares about people, and she will use her seemingly endless energy and passion to fight for them. At this moment, when the very fabric of American life is at stake, Elizabeth Warren is the president this nation needs.”

According to the board, the proof of this — and of Warren’s political and policy skill — lies in her work in creating the Consumer Financial Protection Bureau (CFPB), an agency the editorial board described as being designed to “look out for little guys swindled by lenders and credit card companies.”

As Vox’s Emily Stewart has explained, Warren fought for the agency’s creation and was appointed to build it by President Barack Obama. In her reporting, Stewart describes how Warren created the bureau from scratch, often clashing with Obama administration officials — and sometimes the former president himself — as she did so:

It was a difficult task, but one Warren succeeded at.

“She did an effective job starting up that organization by almost any measure,” Jake Siewert, a former senior adviser in the Obama Treasury Department, told Stewart. “Even the people who hate the CFPB think it’s too effective.”

Warren’s experience with the CFPB gives her experience unique in the field; what the editorial board refers to as the ability to “work the levers of government to translate ideas into signed laws and effective regulations” and what Vox’s Ezra Klein described as an understanding of “how to focus and wield the powers of the regulatory state.”

Beyond her work with the bureau, the board also cited its approval of Warren’s proposed policies on climate change, healthcare, gun violence, child care, immigration, and mass incarceration as factoring into its decision.

“Those ideas are not radical,” it wrote. “They are right. They would improve life in America, and they are generally shared by the other Democratic candidates, who bring their own strengths to this race.”

While the board did say that some of Warren’s ideas — particularly around corporate governance and taxation — “go too far,” it argued that the candidate is nevertheless heading in the right direction.

The endorsement is great news for Warren, who has recently been losing steam in Iowa.

In the most recent New York Times/Siena College poll released on Saturday, the senator came in fourth place at 15 percent — a stark contrast to when she led the field in October at 22 percent. But there’s still time for her to push out ads in Iowa that include her newest endorsement, which could help her win over the 39 percent of likely caucusgoers who told Siena pollsters that they’ve yet to settle on a candidate.

Warren’s reaction to the endorsement reflected just how coveted the endorsement is, especially within the volatile Democratic field. After receiving the news, she bounced up in shock, then did a little dance:

Later on Twitter, Warren thanked the publication, and had one message: “Iowans are ready to make big, structural change—and I’m going to fight my heart out for everyone in Iowa and across the country.”

In a tight race like the 2020 primary, endorsements can be influential

Recent state and national polls haven’t been as promising for the Massachusetts senator as they once were — with Warren’s loss appearing to be Sen. Bernie Sanders’s (I-VT) gain. Sanders has been topping polls in Iowa and New Hampshire, including some once led by Warren, and has even taken the lead nationally, according to a recent CNN poll.

This reversal of fortune follows a public feud between the two progressives about whether Sanders told Warren he believed a woman couldn’t win the presidency in 2020. Sanders and his allies claim the senator from Vermont said no such thing; Warren and her allies say he did.

While tensions over that disagreement seem to have receded somewhat, Siena pollsters found the issue is still weighing on the minds of Iowans — 38 percent of likely caucusgoers said a woman would have a harder time beating President Donald Trump than a man.

That being said, there’s no doubt that this is still a four-way-race between Warren, Sanders, former Vice President Joe Biden and former South Bend Mayor Pete Buttigieg. And when a race is this tight, newspaper endorsements — which generally don’t have much influence on the outcomes — can make a difference, according to FiveThirtyEight’s Nate Silver: “Historically, it helps the endorsee by 3 points which matters in a race where the top 4 candidates are separated by ~5 points,” he tweeted.

Should Warren see a similar boost, it would come just in time. A 3 percentage point boost would not make her the Iowa frontrunner, according to the latest Times/Siena poll, but it would put her in second place.

And it is important to note the Times/Siena poll found Warren to be the top second choice for likely caucusgoers — an important metric because caucusgoers whose first choice does not win at least 15 percent of the caucus in a given district are asked to caucus for their second choice. Should she see the sort of bounce predicted by Silver, and win some districts as a popular second choice, a win in Iowa begins to seem well within the realm of possibility.

Iowa caucusgoers are notorious for deliberating until the last minute. That’s good news for Warren, who’s just tucked an influential endorsement under her belt at the 11th hour. In just over a week, we’ll know whether this endorsement was what she needed to regain her momentum in the crowded field.

Biden is now the presumptive Democratic nominee. Here’s how he stacks up against Trump in the polls.

When will the economy be good again?