In front of a crowd nearly triple the anticipated turnout, John Fetterman, the Democratic nominee for Senate in the battleground state of Pennsylvania, spoke for roughly 11 minutes on Friday in his first public campaign appearance since suffering a stroke in May.

Dressed in a hoodie and flanked by his wife, Gisele Barreto Fetterman, at a convention center in Erie, Fetterman discussed his stroke and threw jabs at his Republican opponent, Dr. Mehmet Oz, in front of an energized crowd his campaign said exceeded 1,300 people.

The lieutenant governor briefly paused in the middle of several sentences and sometimes repeated words. In an interview last month with the Pittsburgh Post-Gazette, he said he was working with a speech therapist and insisted he had "nothing to hide" regarding his health.

"Tomorrow is, three months ago, my life could have ended," he said, remembering the moment he said his wife noticed he was having a stroke on the way to a campaign event. "Let me just tell you right now, in front of everyone, Gisele saved my life."

"Tonight, for me, it's about being grateful," he said. 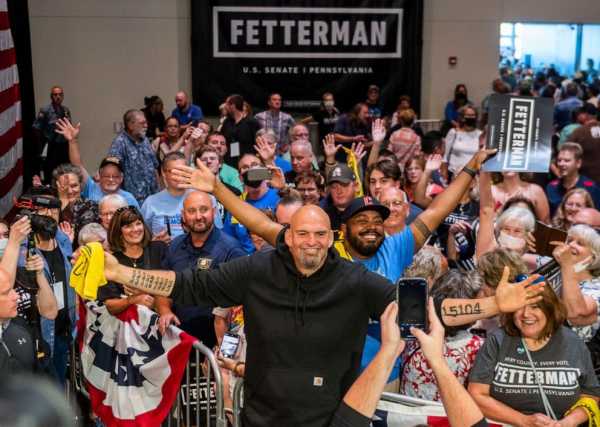 ERIE, PA – AUGUST 12: Democratic Senate candidate Lt. Gov. John Fetterman (D-PA) takes photos with supporters following a rally at the Bayfront Convention Center on August 12, 2022 in Erie, Pennsylvania. Fetterman made his return to the campaign trail in Erie after recovering from a stroke he suffered in May. (Photo by Nate Smallwood/Getty Images)Nate Smallwood/Getty Images

Keeping his remarks light on policy, Fetterman took several shots at Oz, whose campaign has made a daily habit of reminding voters of Fetterman's absence, publicizing a running "Basement Tracker."

"Are we in Erie, or have I fit 1,400 people in my basement?" Fetterman roared at the start of his speech.

In a statement Friday night, Oz's communications director, Brittany Yanick, called Fetterman "a no-show for the commonwealth" and said, "Pennsylvanians deserve answers now from Fetterman. It's been far too long."

Fetterman's campaign chose Erie because its voters are notorious for being unpredictable and indicative of statewide margins. Donald Trump won Erie County in 2016 before it swung to Joe Biden four years later. The county was decided both years by fewer than 2,000 votes.

MORE: John Fetterman says his stroke leading up to Senate race was 'preventable'

Local leaders touted Fetterman's popularity in Erie, saying it was a city where he often campaigned and vacationed.

"I think for a lot of people in this community, they look at somebody like John Fetterman and they go, 'He understands us. He's been here.' They kind of think about him as a member of this community," said Jim Wertz, Chair of the Erie County Democratic Party.

"Fetterman has spent more time here as an elected official than anyone I can remember since he first ran for Senate in 2016," he added, referring to Fetterman's first campaign for a U.S. Senate seat.

Fetterman's campaign expressed enthusiasm after the event, with a spokeswoman, Emilia Rowland, telling ABC News she thought the lieutenant governor "sounded great" and that the campaign had hoped for a turnout of "500 at best."

Liz Allen, president of the Erie City Council, said she was "impressed."

Fetterman's recovery from his stroke is personal for Allen, 70, a lifelong Erie resident, who described to ABC News her brother's steady recovery from a stroke in 2019.

"My brother went back to work, but there was a period of time where he struggled to get the right word, and I think he is as sharp and as smart as ever," she said. "I have seen somebody have a stroke and recover and it does take time."

Some attendees told ABC News after the event they believed Fetterman did not look fully healthy.

Mark Rathi, 62, of Crawford County, said the candidate "seemed a little bit off his game" before adding that he supported Fetterman because of how he connects with people.

Rita Lynch, 82, told ABC News she was "glad [Fetterman] came, but I think he's got to be careful because you could tell he was sweating a lot."

Lynch said she hopes Fetterman's campaign aides ease the candidate back onto the trail.

"I think it was a beginning for him, the first one since the stroke, and that's always a challenge," she said.

Bob Nierakto, 81, of Erie, said he was "disappointed" in what he called Fetterman's lack of energy.

"I'm waiting for him to come out so I can give him a talk," he said with a laugh, as he stood by the exit.