Top lawmakers on Tuesday presented police officers who defended the Capitol on Jan. 6, 2021, with Congressional Gold Medals — the highest honor that Congress can bestow — nearly two years after the attack.

For many officers honored, the Rotunda ceremony marked the first time since Jan. 6 that they've returned to the Capitol complex.

"Many of us still carry the physical, mental and emotional scars after that mob of thousands launched a violent assault in an attempt to halt the counting of electoral ballots," said Chief Robert Contee of the Metropolitan Police Department. "The sound of metal poles and other objects striking the bodies, helmets and shields may still ring loudly — the air, still thick with bear spray and other chemicals, making it difficult for our officers to see and breathe — the calls for your fellow officer to be harmed just as loud as the day that this occurred." 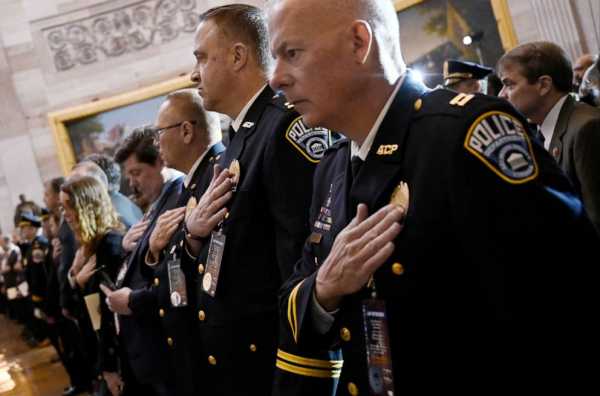 Police officers stand for the US National Anthem during a Congressional Gold Medal Ceremony in honor of the US Capitol Police and those who protected the Capitol on Jan. 6, 2021, in the US Capitol rotunda in Washington, Dec. 6, 2022.Olivier Douliery/AFP via Getty Images

"But there is hope," Contee added, speaking directly to the scores of police present, "because through adversity comes growth, and we continue to grow together and deliver excellence to our community."

"Defending the U.S. Capitol is something that you will carry with you for the rest of your careers and lives. Regardless of your political affiliation, you responded like you do each and every day: without hesitation, with courage and an unwavering duty to uphold your oath," Contee said. "You did not give up, and you did not give in." 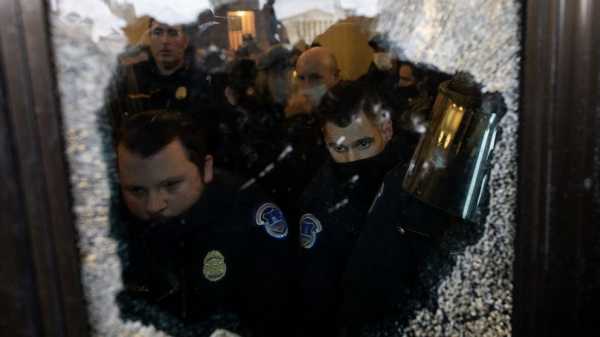 House Speaker Nancy Pelosi, in one of her final ceremonial acts in leadership, was the first to deliver remarks of the top four congressional leaders, all of whom were present. She recalled Jan. 6 — in which a mob overran law enforcement and stormed the Capitol to try and prevent the certification of Donald Trump's election loss — as a "day of horror and heartbreak" but also a "moment of extraordinary heroism."

"Exactly 23 months ago, our nation suffered the most staggering assault on democracy since the Civil War," Pelosi said. "Staring down deadly violence and despicable bigotry, our law enforcement officers bravely stood in the breach, ensuring that democracy survived on that dark day. So on behalf of the United States Congress and the American people, it is my honor to present the Congressional Gold Medal to the United States Capitol Police, the Metropolitan Police and every hero of Jan. 6."

U.S. Capitol Police Chief Tom Manger said, for his officers, that it was a day "defined by chaos, courage, tragic loss and resolve."

"I especially want to recognize our officers who made the ultimate sacrifice: Officer Brian Sicknick, Officer Howard Liebengood. Now I want to recognize also Officer Billy Evans who was lost in the line of duty on April 2, 2021, when he was attacked outside the Capitol by a lone assailant," Manger said, referring to three police who died in the days and months after Jan. 6. "I appreciate the fact that Congress is acknowledging the courage, the strength and resiliency of each and every member of the United States Capitol Police — sworn and civilian." 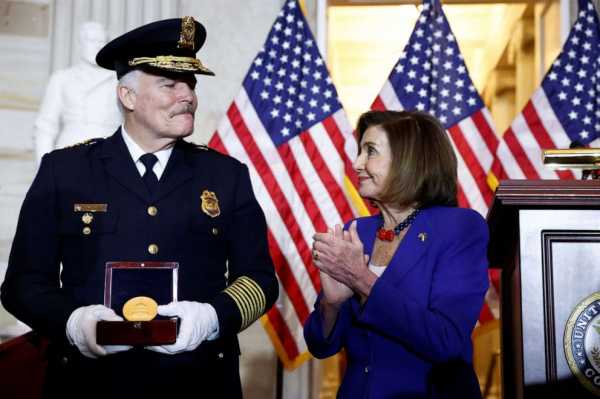 Contee, speaking for Metropolitan Police, thanked "all that voted in favor of this recognition." While the Senate passed legislation last year to grant the medals unanimously with a voice vote, 21 House Republicans voted against it.

The ceremony arrived as Democrats race to finish a nearly 18-month investigation by a House select committee probing the attack amid discussion of criminal referrals to the Justice Department ahead of Republicans taking back the House majority in January.

Republican leader Kevin McCarthy, the likely incoming House speaker, has signaled he would not like to see the select committee kept in place and, instead, hold hearings about security lapses that led to the breach. 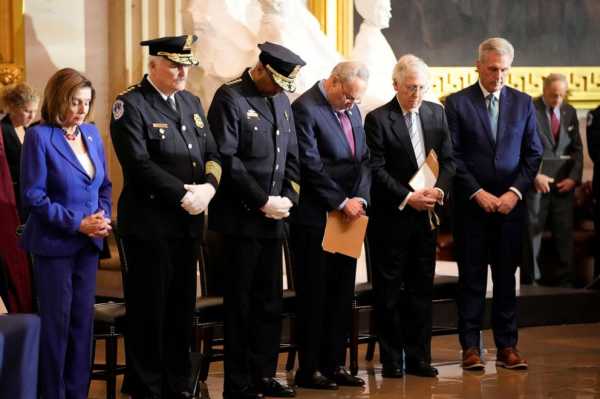 McCarthy, on Tuesday, joined in calling the officers "heroes."

"Heroes who live out the code to protect and serve, heroes who do the noble work — too many people take that for granted — but days like today force us to realize how much we owe that thin blue line. We're forever indebted to them for their heroism," McCarthy said.

Gladys Sicknick, the mother of Brian Sicknick, appeared to pass over McCarthy and Senate Minority Leader Mitch McConnell in a handshake line with congressional leaders. She had lobbied Congress to pass legislation for a bipartisan select commission to investigate Jan. 6, which Senate Republicans ultimately blocked.

Speaking with reporters, she called both McCarthy and McConnell "just two-faced."

"I'm just tired of them standing there and saying how wonderful the Capitol Police is, and then turn around and go down to Mar-A-Lago and kiss his ring and come back. It just, it just hurts," she said.

McCarthy told ABC News after the ceremony, "I don't know. I was holding something," when asked why Sicknick's family did not shake his hand. 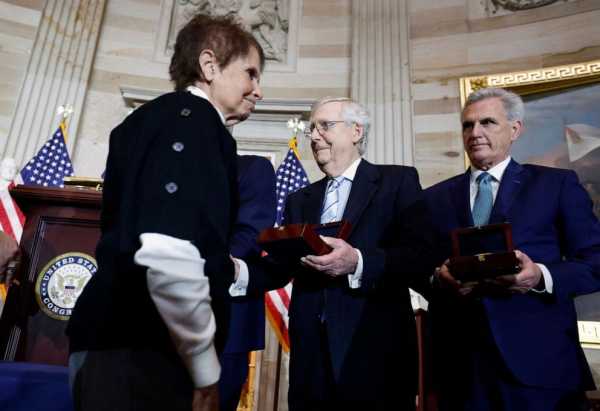 Gladys Sicknick, the mother of fallen U.S. Capitol Police officer Brian Sicknick, walks past Sen. Minority Leader Mitch McConnell and House Minority Leader Kevin McCarthy without shaking their hands during a Congressional Gold Medal Ceremony for officers who defended the Capitol on Jan. 6th, in the rotunda of Capitol Building on Dec. 6, 2022 in Washington.Anna Moneymaker/Getty Images

In his remarks at the ceremony, McConnell called law enforcement officers at the Capitol "familiar colleagues … the first faces we see on our way in each morning and our last goodbyes every night."

"Because you honored your oath to support and defend the Constitution, we were able to honor ours," McConnell told officers present. "That is a reality that was made especially clear 23 months ago, but it is true every single day. Thank you for having our backs. Thank you for saving our country. Thank you for being not just our friends, but our heroes." 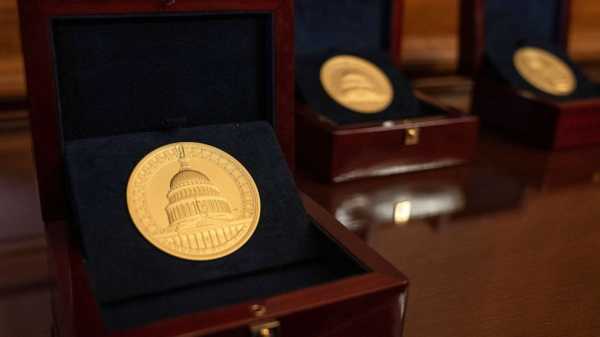 Congressional Gold Medals, in honor of the U.S. Capitol Police, the Washington, DC Metropolitan Police, and others who protected the Capitol on Jan. 6, 2021, are displayed ahead of a ceremony at the Capitol, Dec. 6, 2022, in Washington.Jacquelyn Martin/AP

When President Joe Biden signed legislation to grant the medals last year, he said that one would be placed at the Smithsonian Museum "so all visitors can understand what happened that day." Medals will also be placed at the Capitol, at the U.S. Capitol Police headquarters and at the Metropolitan Police Department.

"We cannot allow history to be rewritten," Biden said at a Rose Garden ceremony last summer. "We cannot allow the heroism of these officers to be forgotten. We have to understand what happened — the honest and unvarnished truth. We have to face it."